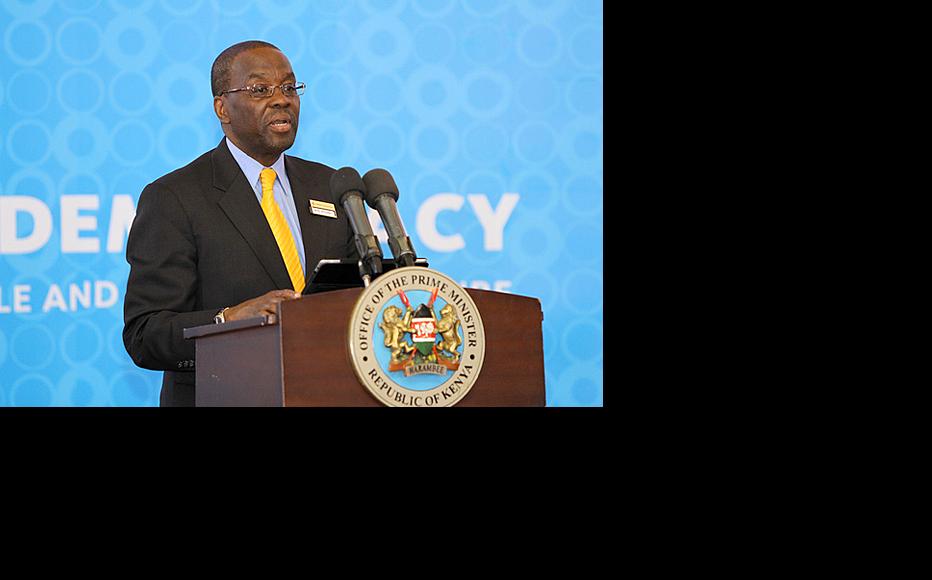 The suspension of four senior figures in the Kenyan judiciary who have been accused of corruption has further damaged deteriorating public confidence in the country’s court system.

Kakai Kissinger, deputy chief registrar in the national judiciary; its director of human resources, Dismas Obondo; the director of supply-chain management, Martin Okwata; and the director of information, communication and technology, Thomas Atak, were temporarily relieved of their duties on April 3 by Chief Justice Willy Mutunga.

An investigation will be launched next month into alleged misconduct.

This latest development follows a public survey in February that showed a significant decline in public confidence in the work of the chief justice and courts across the country including the Supreme Court and High Court.

According to the study published by the Ipsos Synovate group, public confidence in the Supreme Court has fallen by 12 per cent since November last year, while confidence in the High Court and local magistrate courts across the country fell by seven per cent.

Legal experts say the judiciary has made some serious errors and unless these are addressed, they could undo the improvements that Mutunga has put in place since he became chief justice in 2011.

Under Mutunga, more courts have been built, larger numbers of judges, magistrates and other judicial staff have been recruited, and court procedures have been simplified. He has also made serious attempts to tackle corruption within the judiciary and to engage with the public.

“It is now easier for the common man to walk into court and demand justice, even against the government, without fear of intimidation,” Nairobi-based lawyer Ochanda Onguru told IWPR.

Despite these gains, legal experts say a succession of internal disputes and corruption allegations have dented Kenyans’ faith in the system.

There have also been open confrontations between the judiciary and legislators. In February, members of Kenya’s upper house of parliament, the Senate, voted unanimously for the creation of an 11-member committee to investigate allegations of misappropriating public funds leveled against the governor of Embu County, Martin Wambora.

In doing so, it disregarded a court order by Justice David Majanja that had barred the Senate from investigating the governor until the courts had ruled on the correct procedure that should be followed. (See Governance Row Threatens Kenyan Devolution for more on this case.)

At the time, Kenyan president Uhuru Kenyatta reprimanded the judiciary, which he accused of interfering with the legislative arm of government.

In response, the leader of the opposition, Raila Odinga, accused Kenyatta of deliberately undermining the justice system.

In a separate incident in January, the president’s chief of staff, Joseph Kinyua, defied a court ruling when he made new appointments to the Teachers’ Service Commission, the body that oversees staff in the education sector.

In each instance, judges have failed to bring contempt-of-court charges against those who went against their orders. This has prompted further criticism from the likes of the Law Society of Kenya, which called the situation a “recipe for chaos”.

Onguru told IWPR that this trend threatened to undermine the rule of law in Kenya.

“When people defy orders from a court of law, we are headed to the rule of the jungle,” he said. “Whoever deems court orders useless should go to court and seek to have those orders vacated.”

Onguru argues that some of the current disputes about court orders can be traced back to last year, when the Supreme Court issued a ruling on the result of the March 2013 presidential election. It confirmed Kenyatta as president after dismissing a legal challenge from the opposition candidate, Odinga, who questioned the vote count.

That ruling was controversial because of allegations that it ignored clear inconsistencies in the vote-counting process, and that judges discounted evidence that was filed late.

Onguru says this ruling has come back to haunt the judiciary.

“The Supreme Court is the highest court in the land and cannot be seen to make obvious mistakes,” he said. “After that ruling, public confidence in the Supreme Court went down. This is why everybody now feels justified to defy court orders.”

Another challenge facing the judiciary is the impact of recent disputes among its own staff.

In October 2013, the judiciary’s then registrar, Gladys Shollei, was sacked for alleged mismanagement and abuse of office. Following her dismissal, the press got hold of internal emails that ostensibly detailed a plot to get rid of Shollei.

On March 7 this year, the Industrial Court, which deals with labour disputes, ruled that Shollei’s dismissal was unfair and a breach of her constitutional rights. In his ruling, Justice Nduma Nderi said Shollei was entitled to compensation.

Analysts like Dr Godfrey Musila, a senior law lecturer at the University of Nairobi, argue that such spats, played out in the media spotlight, further tarnish the judiciary’s public image.

“The judiciary ought to be above reproach and should not be seen to be unable to manage its own internal affairs,” he told IWPR.

Other problems stem from the slow pace of trials and difficulties in ensuring effective investigations and access to justice.

In his inaugural report on the state of the judiciary, released in February, Mutunga acknowledged a number of shortcomings.

“Access to justice for ordinary citizens has been hampered by lack of physical access to courts due to long distances, complex and unfriendly procedures, lack of information and delays in determination of cases,” he wrote.

He noted that nearly 50 per cent of complaints about the court system from members of the public were due to the slow progress of cases, and the frequency with which case files go missing.

Eunice Kioko, who lives in Nairobi, brought a legal challenge against her dismissal from an NGO in 2011. Three years later her case still drags on.

“This case has been adjourned so many times, I have lost count,” she told IWPR. “I don’t understand why the respondents fail to appear in court or why the court can allow so many adjournments. I think the idea is to frustrate me until I give up, but I will never give up.”

Nairobi lawyer Ken Mark Bosire has called for more detailed guidelines to be drawn up on adjournments in order to prevent such delays.

“Lazy judges and magistrates adjourn matters without due regard to the affected parties. They are failing to do their job,” Bosire said. “Judges are left to their own discretion to adjourn matters, thus opening the process to manipulation to frustrate pursuit of justice.”

Mutunga says improvements, including a new electronic records system to capture case data and manage court files, have helped. He claims the system has enabled courts to track cases and prioritise those that have taken too long.

The judiciary has also recently begun an audit of the case backlog in various courts to tackle pending cases as quickly as possible.

There has been praise for Mutunga’s efforts over the last three years, although some question whether he can push through all the necessary changes.

Musila says that if the chief justice is to be successful, he needs broader support from government.

“The reconstituting of the judiciary that was envisaged with the appointment of Dr Mutunga, a known reformer, has lacked the political will necessary to produce the results that Kenyans had hoped for,” he said.