Observers say that by ignoring court orders, Senate members are undermining the rule of law.

Observers say that by ignoring court orders, Senate members are undermining the rule of law. 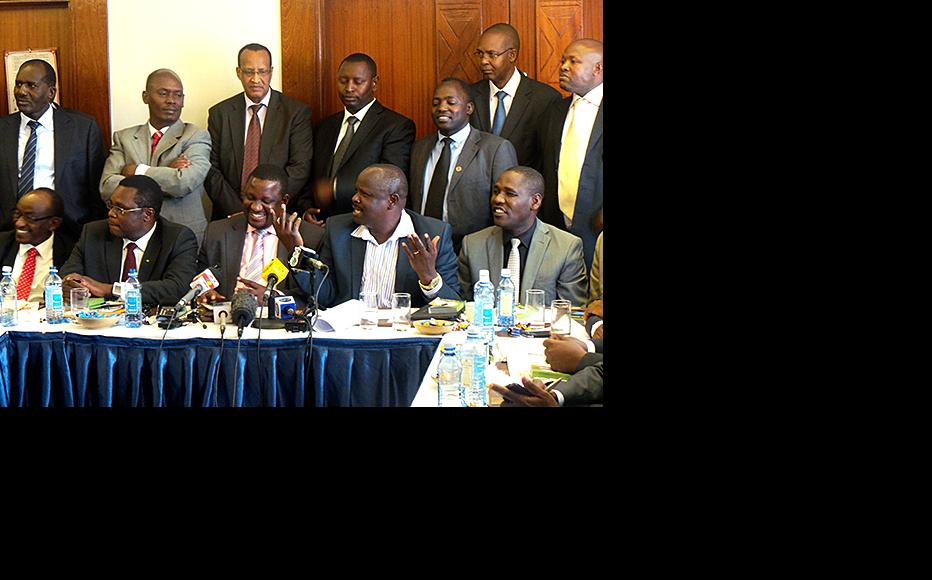 Kenya's constitution puts the upper house, the Senate, in charge of overseeing the devolution process and protecting the interests of county administrations. (Photo: Capital FM, Nairobi)
The link has been copied

Constitutional experts warn that attempts by members of the upper house of parliament in Kenya to remove county governors from key financial committees could harm efforts to introduce a system of devolved government.

They warn that a recent move by the Senate to ignore a court order and impeach a county governor could further undermine the rule of law.

Devolution was introduced after a general election in March 2013 in which governors were elected to Kenya’s 47 counties. Those appointed to this new post were granted powers designed to enhance decision-making at the local level and open up new economic opportunities across the country. (See Kenya’s Devolution Squabbles.)

The constitution puts the upper house, the Senate, in charge of overseeing this devolution process and protecting the interests of county administrations.

But senators have been embroiled in a long running battle with county governors, who argue that they are not accountable to the upper house.

The latest row was triggered by a Senate decision to impeach the governor of Embu county, Martin Wambora, on accusations that he had misappropriated public funds.

The Senate unanimously passed a motion to impeach Wambora in mid-February despite a court order blocking it from taking any action against him until the High Court had ruled what action was lawful. Wambora successfully applied for this court order after members of the Embu county assembly accused him of failing to spend public money in line with procurement regulations.

In a preliminary ruling on March 5, a three-judge panel ruled in Wambora’s favour, but it has not yet reinstated him.

After the Senate impeached Wambora, its finance committee summoned a further nine county governors to explain questionable expenditure in their areas of responsibility.

The nine governors obtained their own court order preventing the Senate from taking any action until the Supreme Court rules on whether senators can summon governors to answer questions relating to finances and expenditure.

Kenya’s president, Uhuru Kenyatta, said that it was right for senators to hold Wambora and other county governors to account.

Raila Odinga, the leader of the opposition Coalition for Reforms and Democracy (CORD), accused Kenyatta of failing to respect the courts and “attempting to kill devolution”.

The stand-off prompted senators to seek a role for themselves on the county finance committees, an intervention that some constitution experts could jeopardise the devolution process.

Under Kenya’s three-year-old constitution, members of the upper and lower houses of parliament represent the legislative arm of government while county governors are part of the executive.

Peter Kagwanja, chief executive of the Africa Policy Institute, told IWPR that the involvement of Senate and lower-house lawmakers in county affairs would take Kenya back to an “archaic situation”.

“Their [role] is [to be an] oversight mechanism,” Kagwanja said, underlining that senators are not part of the executive. For them to take a role on county committees on expenditure would thus be “a conflict of interest”, he said.

“I am not saying governors are guilty or not [of financial impropriety]; I am simply saying let each institution do their work,” Kagwanja added.

Other experts on the Kenyan constitution also called for a clear distinction to be maintained between the legislative and executive arms of government.

James Aggrey Mwamu, head of the East Africa Law Society, questioned the motives of senators who were pushing to be involved in county-level committees.

“If the legislators want to sit in the executive, then they must be driven by some interests. It is money,” he said.

Mwamu said should stop passing laws driven by “their interests”, as this would undermine the independence of key institutions.

He warned that besides the county administrations, the country’s judiciary was also under threat.

Charles Nyachae, chairman of the Commission for the Implementation of the Constitution, said court orders must be honoured.

“Where any person has obtained an order not to comply with such summons [by senators], that order must be respected and should not be the basis of animus and antagonism,” Nyachae said.

While senators are legally justified in questioning county governors about their public expenditure, Mwamu said, they should not act in breach of decisions handed down by the courts. He said their actions reflected their attitude to governance, and a view that they “don’t want to be questioned in any way”.

Mwamu criticised a decision taken by senators last week to cut the judiciary’s funding. On February 26, the upper house approved a cut of 500 million Kenyan shillings (5.8 million US dollars) to the judiciary’s annual budget.

Mwamu said the decision stemmed directly from the dispute over court orders protecting the county governors.

“When the courts issue orders that overturn [senators’] decisions, they [senators] resort to pass laws that affect the judiciary operations like they did in slashing 500 million shillings budgeted for the construction of courts,” Mwamu said.

He questioned the motivation behind the senators’ actions, pointing out that they were half-way through their two-year mandate and would soon be seeking re-election. He believes they do not want the electorate to see them being undermined by the judiciary.

“[Senators] are not driven by the desire to serve Kenyans; their time is also coming, because the constitution provides for a recall of a [lawmaker] after two years,” he said.

Meanwhile, the majority leader in parliament’s lower house, Aden Duale, tabled a motion to discuss the conduct of governors whom he described as “rogue leaders who don’t respect the rule of law”.

Since they were elected a year ago, governors have come under fire for being greedy and abusing their status.

“We are going to strip them of the ‘His Excellency’ titles and the use of national flags on their vehicles, because it appears they are drunk with power,” Duale said.

The chairman of the Council of Governors, Isaac Ruto, who is governor of Bomet county in western Kenya, accused the government of embarking on a “smear campaign against county chief executives”.

He said the Jubilee coalition government was plotting to undermine devolution and the progress that has been made on it over the last year.

“The situation as it is shows that the Jubilee government has removed its mask and is now openly fighting devolution,” Ruto said.