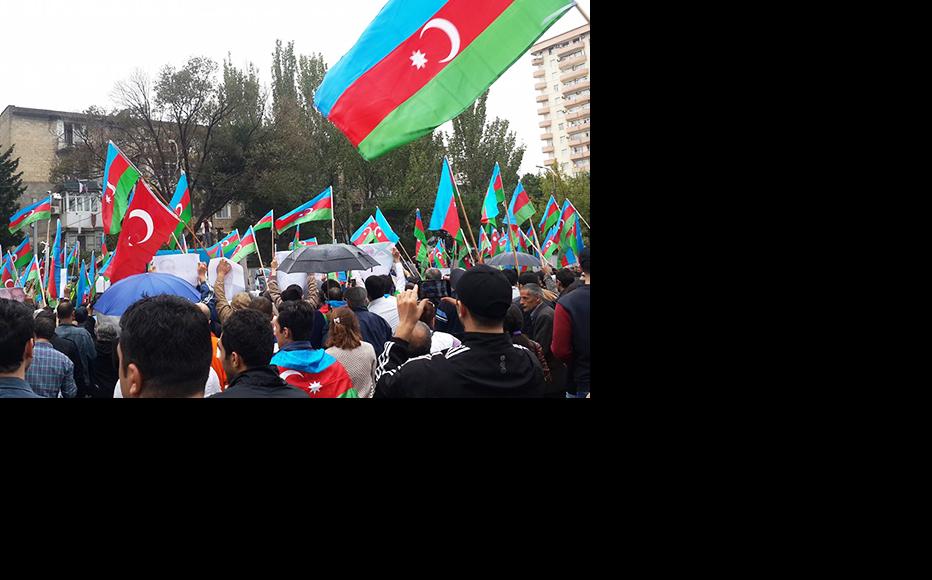 People protest against the amendments to the Constitution, which "will make the republic to the monarchy". (Photo: Kamala Allahverdiyeva) 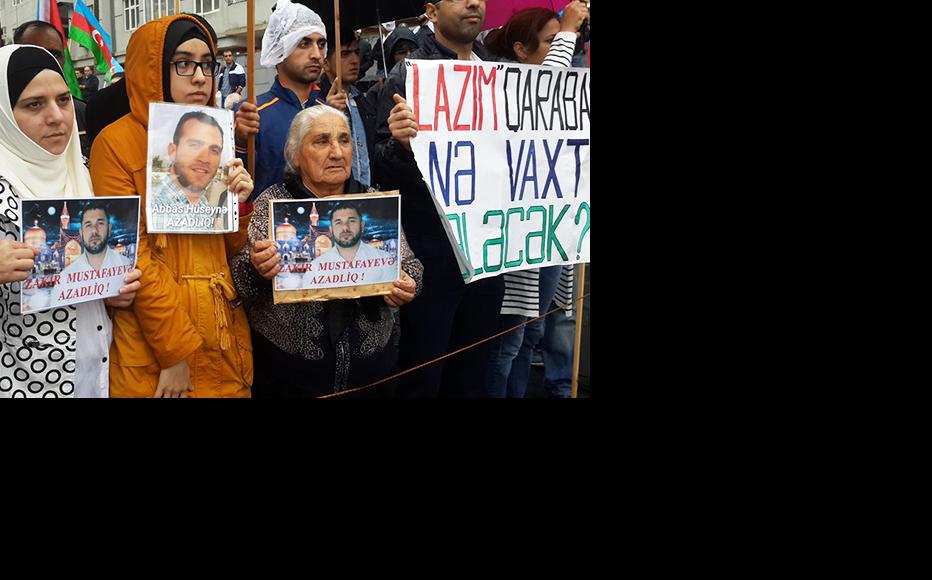 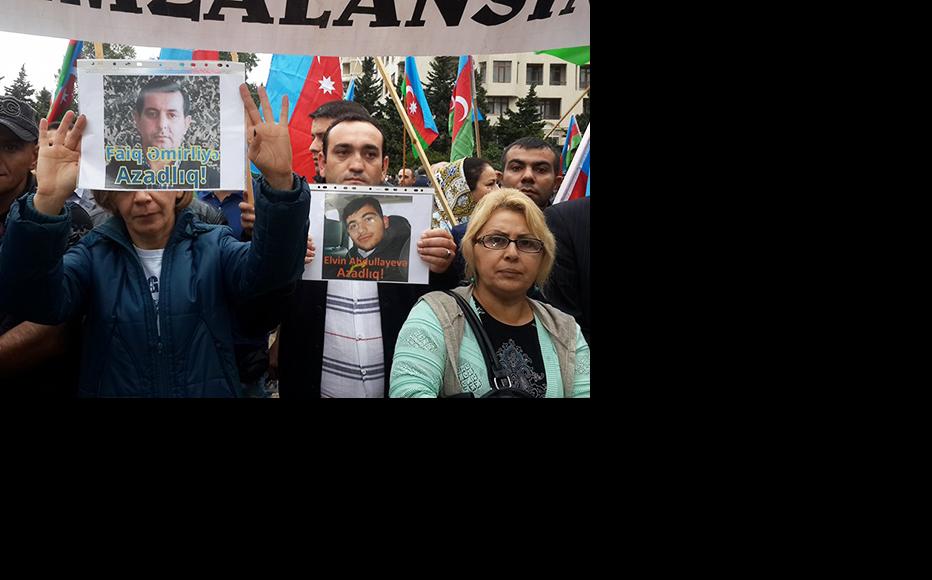 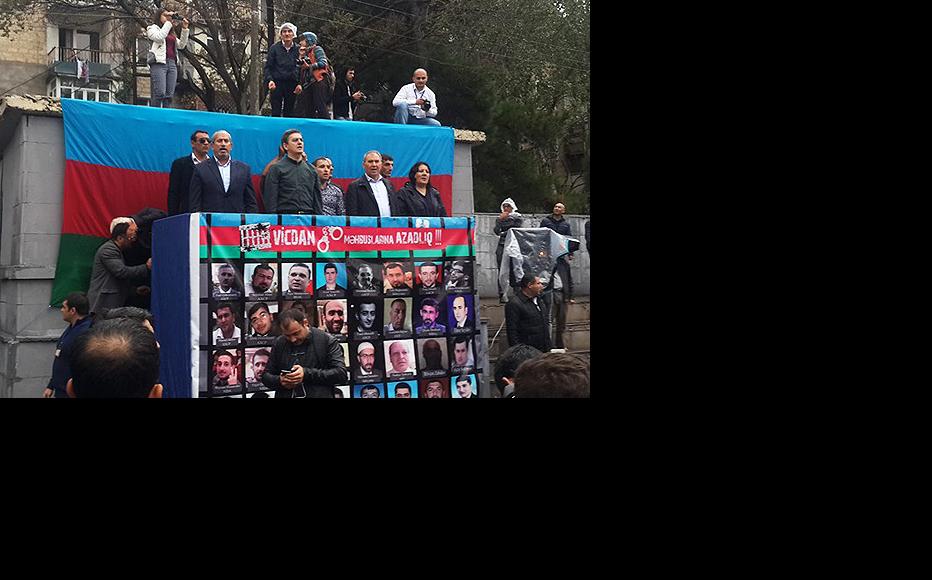 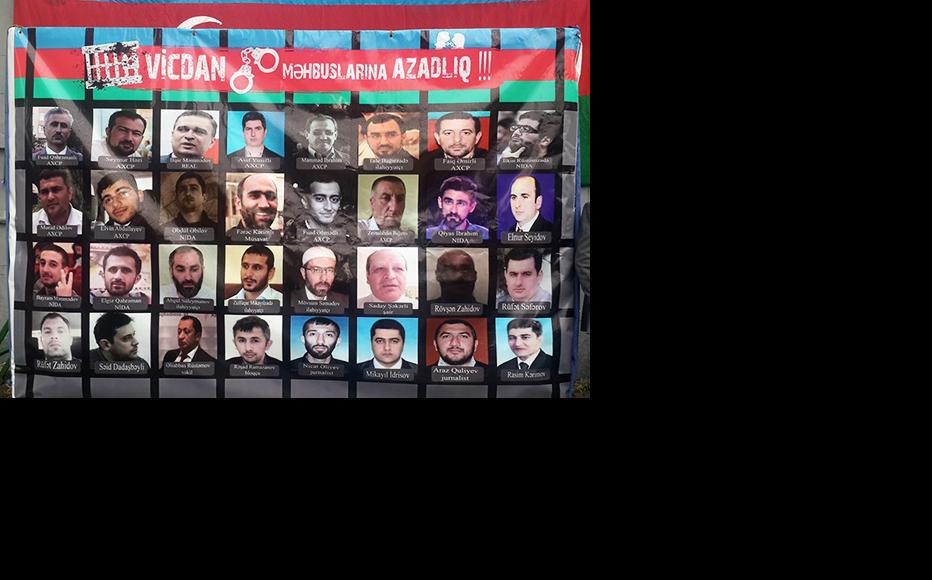 Stand with pictures of political prisoners at the entrance to Mahsul stadium, where a protest was held. (Photo: Kamala Allahverdiyeva)v
The link has been copied

Baku has clamped down harshly on opposition protests ahead of a constitutional referendum set for September 26 that looks certain to entrench the powers of President Ilham Aliyev.

If the reforms are adopted, the presidential term in office will be extended from five to seven years.  The president will be allowed to dissolve parliament and call early presidential elections.  A 25 percent voter turnout will suffice for the amendments to be passed.

Moreover, the minimum age of 35 for a presidential candidate will be abolished, which has given rise to particular concern.

“These amendments are intended to perpetuate the power of the Aliyevs.  It is clear that they are already preparing the throne for Heydar Aliyev junior.  They turn the republic into a monarchy, where power passes from father to son,” said Ulvi Hasanli, a board member of the youth movement NIDA.

“A third generation of the Aliyevs, that is the worst that could happen to the country,” he said.

The Aliyev family has been in power for more than two decades.  Ilham Aliyev took over the presidential office in 2003 from his father Heydar Aliyev, who governed for ten years.  His own son, also called Heydar, is 19 years old and is believed to be being groomed as the successor.

Hasanli said the Aliyev family planned to run the country like a private company.

“The age requirement [for the presidency] will be abolished.  The new positions of first vice president and vice president will be created, which will have more powers than the prime minster.  What kind of picture presents itself to you then?” he asked.

Opposition groups held three major protests were held in the capital Baku ahead of the referendum. The National Council of Democratic Forces organised rallies on September 11 and 17 and a further demonstration was held on September 18 by the opposition Musavat party.

The National Council, formed three years ago at the time of the last presidential election, is dominated by the Azerbaijani Popular Front Party (APFP).  It originally included Musavat together with some smaller parties.  Musavat left the council in 2014.

Thousands of people took part in these protests.  But although the rallies were sanctioned by the municipality, police detained dozens of activists both before and after the events.

“In Baku and the regions, the police are persecuting opponents of the referendum,” said Turan Ibrahim, a member of the APFP´s youth organization. “Before both the rallies we held, more than 70 members of APFP were detained under various pretexts.”

While the first rally passed without incident, the second one at the Mahsul stadium on September 17 ended with arrests of up to 30 participants, including journalists.

“At the end of the rally, people were leaving the stadium when the police attacked them,” Ibrahim said. “Among the police officers were people in civilian clothes, who were particularly brutal.  They beat protesters and forcibly pushed them into police buses.  Many were released after a few hours, and 14 activists were illegally detained for two days.  In addition, during this time, most of them were not even fed.”

According to a statement by the Baku police, a number of protesters were arrested for disrupting the public order.

On September 19, ten activists were taken to court.  Nine of them received eight days of administrative arrest, and one was fined 200 manat (121 US dollars).

NIDA activist Ali Novruzov was arrested the day before the second rally.

“They demanded a written explanation for my participation in the first rally,” he told IWPR.  “They detained me until night and then released me on the condition that I appear the next morning.  I showed up at nine in the morning.  They detained me until the end of the rally.  They shaved my head by force explaining that I was arrested for 15 days.  But I was not arrested.  I was simply let go.”

Masud Asger, a NIDA coordinator, said he was put under police surveillance starting September 15 and was called into the police station on September 17, where he was held the entire day.

“They said that they detained me because I participated in the meeting on September 11.  They openly insulted me, cursed and said I should not go to rallies.  Police from rank and file to the head of the department insulted the participants and organisers of the rally.  They also mocked my dignity and made me do push-ups,” Asger told IWPR.

The two young activists intend to lodge a legal complaint because of their unlawful detention and humiliating treatment.

Abulfaz Sadigbeyli, a Musavat board member, told IWPR that more than 40 party members were detained between September 15 and 18.  On September 17 and 18, the roads from the regions into Baku were tightly monitored and opposition activists were not allowed into the capital.

After the National Council´s rally on September 17, Siyavush Novruzov, a deputy of the ruling New Azerbaijan Party, claimed that the organisers had received funding for this from foreign organisations.

“The meeting of the National Council is populated by the relatives of the heads of the organisations that make up this formation,” he told the news agency Azerbaijani Press Agency (APA).

On September 20, the Council of Europe´s Venice commission voiced “some serious concerns” with the procedure as well as the substance of the reform.

The commission said it was “regrettable” that the draft was being put to a referendum directly without any parliamentary involvement.

“This undermines the legitimacy of the reform,” the commission said.  “In addition, if the draft were adopted, the institutional reform would come into force immediately, and the balance of powers would be shifted in favour of the president.”

The new presidential powers will be “unprecedented” and will “reduce [Aliyev’s] political accountability and weaken parliament even further,” the commission added.

“When authoritarian governments want to silence criticism, they can do so quietly, or brazenly,” she wrote on the HRW website. “Today, Azerbaijan is doing both.”