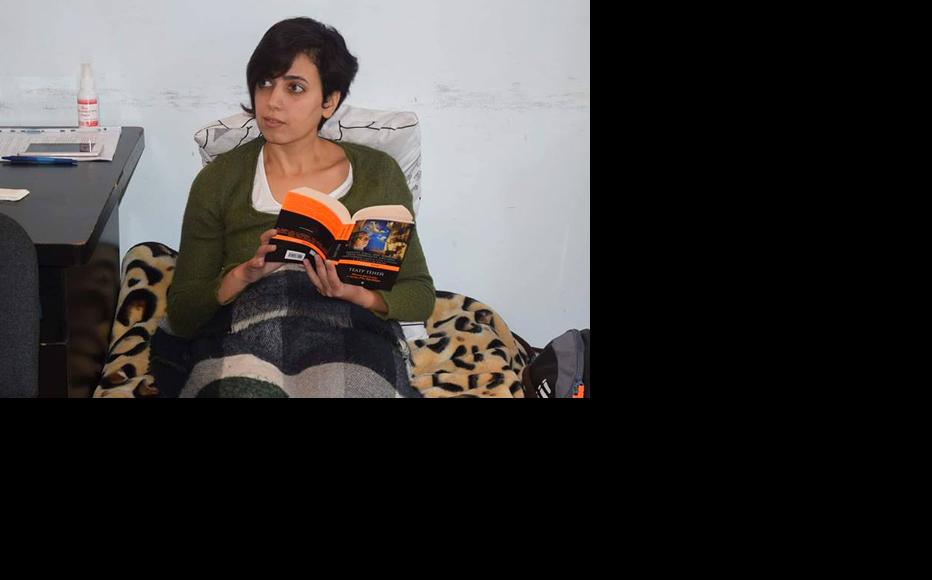 Sanubar Heydarova, an activist pictured on the fifth day of her hunger strike. (Photo: Khadija Ismayil) 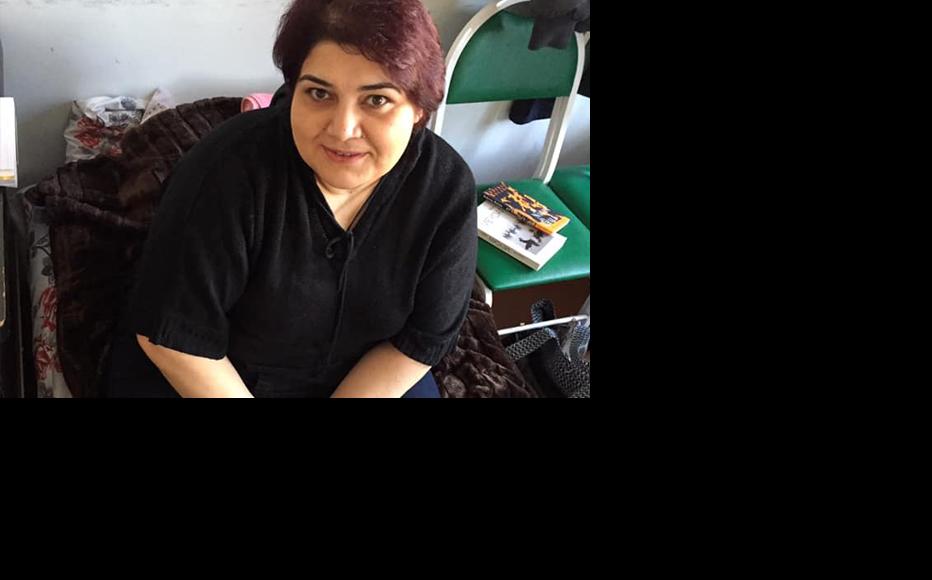 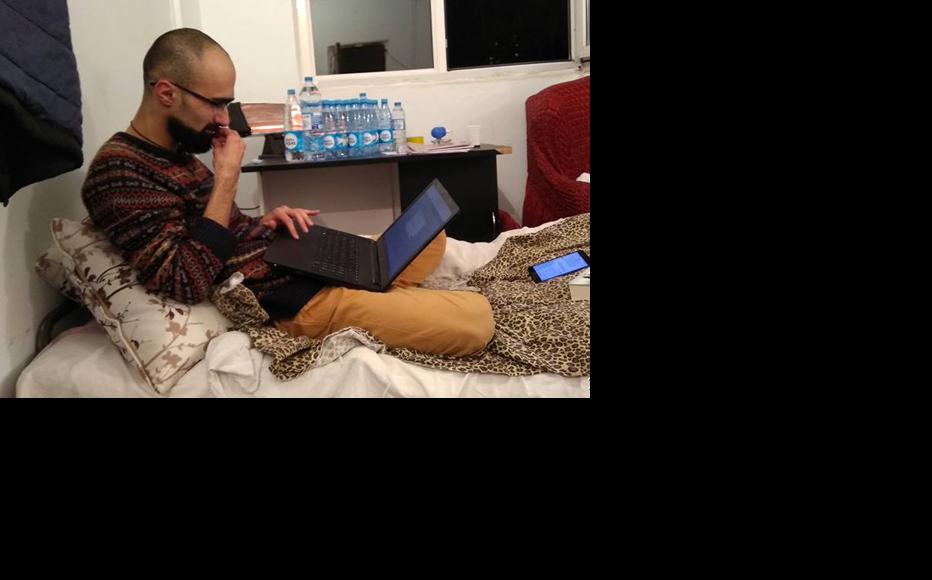 Namig, a citizen protesting in support of Huseynov. (Photo: Sanubar Heydarova)
The link has been copied

Activists in Azerbaijan hope that a rare government-sanctioned protest in Baku on January 19 may be a turning point in their battle to free one of the country’s best-known political prisoners.

Video blogger Mehman Huseynov, 26, has been imprisoned for almost two years and began a hunger strike on December 26 last year. Other activists and opposition leaders have joined this hunger strike in solidarity with Huseynov, who has been declared a prisoner of conscience by Amnesty International.

Dozens of activists were also arrested in a series of protests in Baku and around the country, with some ten sentenced to three weeks of administrative detention and others fined.

Huseynov created and ran the Sancaq Facebook page, which has almost 350,000 followers, posting videos critical of the authorities. After being arrested in early 2017, he told reporters that he had been tortured by the police. As a result of this statement Huseynov was accused of slander and sentenced to two years in prison in March of that year.

Then, in December 2018, another criminal case was opened against him in which he was accused of beating a prison guard. Huseynov protested his innocence and launched the hunger strike.

Other political prisoners and former detainees also announced a hunger strike in support of Huseynov.

Prominent dissident Kahdija Ismayil announced, “This is the last resort. I have nothing else to sacrifice with other than my health.”

A January 13 letter signed by five detainees, including Ilkin Rustamzade, convicted for organizing mass protests against the death of soldiers, Bayram Mammadov and Giyas Ibrahimov, declared, “We are protesting against our country being plunged into darkness.”

Tofig Yagublu, deputy chairman of the Musavat party, joined the hunger strike for 13 days, only ending it so he could take part in the Baku rally.

He said that the event could be a turning point in the battle for human rights in Azerbaijan.

“We have a historic opportunity to change the status quo of our society,” he said. "I expect the high turnout of protesters and really hope that this time the authorities will retreat.”

“I believe that by supporting Mehman with a hunger strike and other protest actions, we achieved the first result,” Yagublu continued. “The international community has finally drawn attention to the problem. We have also managed to engage more people within our society in this struggle against injustice.”

“Those who are unfairly convicted need support and empowerment from society as they continue their fight behind bars,” she said. “We see that there are serious demands on the authorities made by the international community. I believe that these are not just the statements for show and that results will follow.”

Heydarli also intended to join the Baku protest. “The opposition has no other means, they do not have access to media, their offices are closed, freedom of assembly is restricted, they have no other options,” she concluded.

“Mehman has been unlawfully isolated for two years already. The [real] reason for his arrest is his reporting on corruption by officials. He is a very young person and has already influenced hundreds of thousands of people.”

It is unusual for the government to allow such a protest to take place.

In answer to a request for comment, Orkhan Mansurzade, press secretary of the ministry of internal affairs of Azerbaijan, said, “Police, as always, will guard public order and ensure the safety of all protesters taking part in the rally.”

Others stress that the protests are about all political prisoners, not just the case of one man.

“As the events of the last 15 years show, the persecution of opponents of the authorities is a growing trend,” said Khalid Bagirov, who sits on the governing board of the opposition Republican Alternative (ReAl). “This is not just about Mehman Huseynov. This is just a continuation of a long process, and until the ‘stop’ signal sounds, the pressure and cruelty of the government will grow.”

For Mehman himself, matters had reached a decisive moment, Bagoriv continued. “It’s necessary that the society remains persistent in relation to the case of Mehman. If society retreats, Mehman will surely get another term, and this will establish even a more dangerous trend. The authorities will no longer simply arrest opponents on false charges, they will keep them in prison as long as they please.”

It is unclear whether Huseynov is still on hunger strike or not. Statements issued by the penitentiary service first claimed that he had not gone on hunger strike and then that his protest had only lasted for one day.

His lawyer Shahla Humbatova was able to see her client only on the twelfth day of his hunger strike. She wrote on her Facebook page that Mehman had began drinking milk on medical advice. He was later also visited by the Red Cross and some foreign diplomatic missions.

“I want to bring to the attention of those who love me that I am not ill, I take food and recover after the hunger strike. I expect the lawsuit in relation to me to be fair,” his letter read.

Humbatove said that she had been by her client’s statement, as during their meeting he had not mentioned using a public announcement.

The blogger’s brother, Emin Huseynov, a head of the Institute for Reporters Freedom and Safety and currently lives abroad, said that the letter was not genuine.

He said that the blogger had called home from the detention centre on January 12, making it clear that he could not speak freely but implying that he was still on hunger strike and had some health issues. Huseynov also requested a meeting with his lawyers.

According to the Committee to Protect Journalists (CPJ), out of the 251 journalists imprisoned around the world, ten of them are in Azerbaijan. Among them is Afgan Mukhtarli, an IWPR journalist abducted in Tbilisi and forcibly transferred to Baku prison in May 2017.

Most of those imprisoned had covered cases of high-level corruption involving high-ranking government officials and were detained on charges including hooliganism, bribery and extortion as well as drug possession.

Eight of the journalists are serving prison sentences from two to eight years, and most are reported to have health issues.

Samira Ahmedbeyli is a freelance journalist and ex-IWPR Azerbaijan editor based in Baku.

Giving Voice, Driving Change - from the Borderland to the Steppes
Azerbaijan
Detentions, Free expression, Journalism
Connect with us