Trial of 22 defendants enters final stages amid concerns of bias and lack of transparency.

Trial of 22 defendants enters final stages amid concerns of bias and lack of transparency. 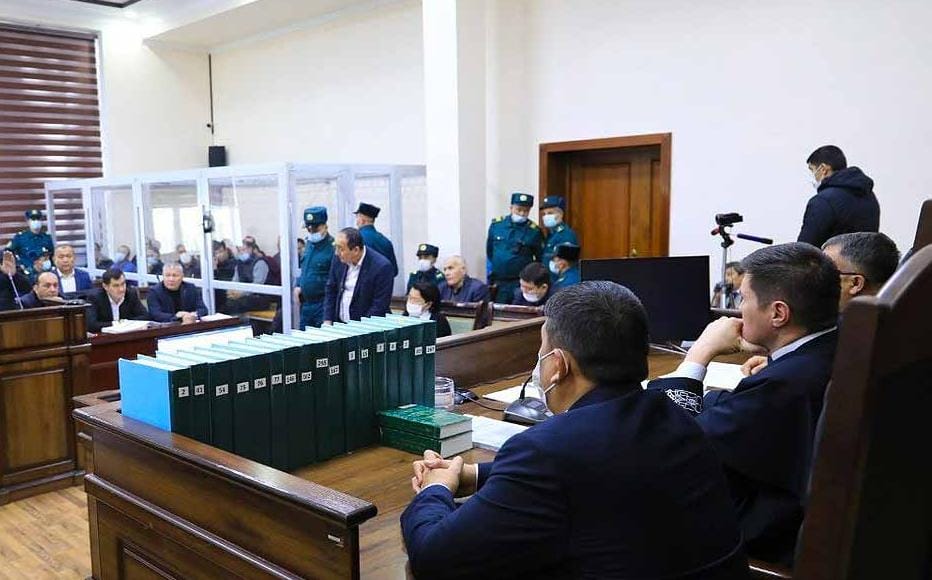 Uzbekistan’s state prosecutor requested long jail terms for 22 activists and journalists accused of fomenting the July unrest that shook Nukus, the administrative centre of Uzbekistan's north-western region of Karakalpakstan in July 2022. © Uzbekistan's Supreme Court
The link has been copied

Uzbekistan’s state prosecutor has requested long jail terms for activists and journalists accused of fomenting the July unrest that shook Nukus, the administrative centre of the Karakalpakstan region, in July 2022.

On January 12, the prosecutor accused the defendants of pushing for separatism and threatening the constitutional order. He asked for journalists Dauletmurat Tadzhimuratov and Lolagul Kallykhanova to be sentenced to 18 and 11 years respectively, between five and nine years for 18 other defendants and three years for another two accused. Defendants were charged under 11 articles of the criminal code, including “deliberate grievous bodily injury” “infringement on the constitutional order” and robbery, among others.

On July 1, 2022 protesters took to the streets of Nukus over proposals by President Shavkat Mirziyoyev to amend the constitution and curtail Karakalpakstan’s autonomous status and right to secede from Uzbekistan via referendum. Amid the largest unrest in the country in decades, some protesters reportedly tried to storm local government buildings, following a march and a rally at the city's central market.

Over 500 people were arrested, 21 died and 243 were injured, according to official sources. Mirziyoyev dropped plans to end the autonomy of the north-western region, which makes up about 40 per cent of Uzbekistan’s territory. Authorities blamed the clashes on “forces from abroad” but observers pointed to the region’s poor socio-economic and environmental situation as the trigger.

Local and international human rights institutions condemned Uzbekistan for the excessive use of force and called on the government to conduct a fair investigation. The New York-based Human Rights Watch questioned the activities of the 14-member special parliamentary commission established on July 15, stating that “one can hardly count on a truly independent investigation, especially when it comes to the actions of the police and other security agencies”.

Human rights activists and journalists acknowledged that did authorities did take some steps towards a fair trial; reporters were allowed to attend, placed in a separate room in the same building with a screen and computer monitors to watch the proceedings. The live feed however was often of poor quality, making it difficult for reporters to follow the debate.

On December 5, as the questioning of the witnesses started, the prosecutor requested the feed be interrupted in accordance with the article 432 of the Criminal procedural code, pledging to re-instate it in the debate phase of the trial.

The prosecution indicated Tajimuratov and and Kallikhanova, of the Makan.uz website, as two of the leaders behind the Nukus unrest.

“We fear that the verdict will not be in favour of the defendants,” an Uzbek journalist following the trial told IWPR on condition of anonymity. “None of the relatives wants to talk to journalists, fearing that it could harm their relatives in court. Apparently, they were warned, either by the investigators or by the [defendants] themselves, not to communicate with the press. No one has yet answered questions about complaints of ill-treatment during the detention of the defendants. The authorities promised that there would be a second trial of officials and law enforcement officials who shot at people. But we have little faith in this, given how the protests were suppressed earlier. Only the protesters were put behind bars, but those who ordered people to be shot never answered.”

Gulnoz Mamarasulova, a human rights activist who represents the Swedish Foundation for Human Rights in Central Asia in Uzbekistan, told IWPR that they had been given the opportunity to visit the detention centre where the defendants were being held.

“We were in the detention centres and communicated with the defendants. We conducted monitoring to examine their conditions and whether there was any kind of pressure on them from the investigating authorities," she said, adding that they did not find any serious violations.

In his testimony on December 1, Tajimuratov - former editor-in-chief of the El Khyzmetinde newspaper, who went on to found a human rights organisation with the same name - said that he was tortured during detention in Nukus. He also added that on July 1, a video was distributed on social networks showing him by the mosque after Friday prayer while saying that he had sent a request for permission to hold a “legal rally” “for the freedom of Karakalpakstan” on July 5.

He added that on the same day, masked men broke into the house, took him, put him on a bus with other people and driven to the police, where, after being put a bag on his head, he was transferred to a car. He was then taken into a building and beaten.

On December 1, Kallikhanova testified that on July 1, 2022 she published a video message on the Makan Telegram channel in which she called for Karakalpakstan to leave Uzbekistan. The video followed Tazhimuratov’s call to rally on July 5.

In court Kallykhanova said that she was in Tashkent and there were reports of people being taken into custody and the Internet was turned off.

Alisher Ilkhamov, director of the London-based political risk analysis Central Asia Due Diligence, maintains that all the charges were politically motivated.

“One of the key charges is based on a reference to two articles of the Criminal Code, article 104, part 3, and article 28, and arbitrarily link each other,” lkhamov wrote in an op-ed published on the Memorial website. “By projecting a combination of these two articles onto the case at hand, it is argued that the accused are allegedly guilty of 'complicity in intentional grievous harm'. Such a cleverly constructed conclusion is, in my view, absolute nonsense from a legal point of view, opening up space for the most biased interpretations of the law.”

Noting that all of the defendants, with the exception of Tajimuratov, had pleaded guilty, Ilkhamov suggested that the defendants may have been tortured or had colluded in exchange for Tajimuratov's conviction.

"The defendants told the court and the public commission earlier that no torture had been used on them,” he said. “However, in the course of the hearing…Tajimuratov stated that he himself was beaten up at least twice by representatives of security agencies in two of his arrests, once on July 1, and again on July 4 after his repeated arrest," he said.

After the prosecution’s case is presented, the hearing will move to the victims, civil plaintiffs or their representatives, defenders and defendants