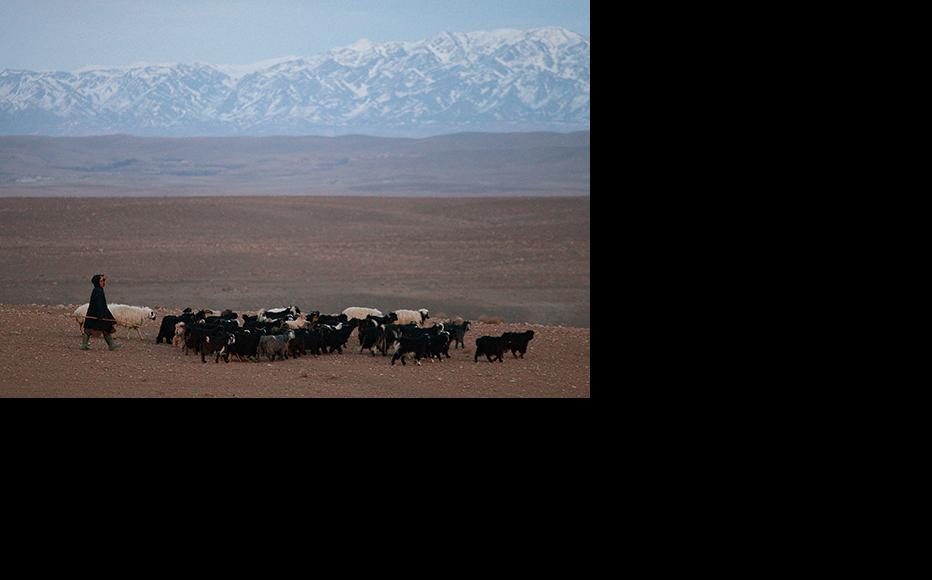 Farmland in Zabul province is drying up as water resources are drained by privately-dug wells. (Photo: Scott Olson/Getty Images)
The link has been copied

A proliferation of privately-dug wells are draining water resources in Zabul province and threatening the livelihoods of hundreds of local farmers.

Low rainfall has led to a surge in the number of private wells being dug to ensure access to what is already a scarce resource. The impact has been to divert flow away from rivers and springs and reduce the availability of drinking water.

Now farmers are finding even the deepest of bore holes are beginning to run dry, threatening their livelihoods.

Nazar Mohammad, 42, used to live in Tanara village in Arghandab district, in neighbouring Kandahar province. He told IWPR that he had previously made around 3,000 US dollars a year from selling his own crops.

But he said that water shortages had become so severe that he had been forced to move to Qalat city in Zabul province, where he now sells vegetables.

“We used to draw water up from our wells with a diesel generator to irrigate my garden,” he explained. “But because our neighbours also dug deep wells for their plots, our well dried and I couldn’t afford to dig another. I also couldn’t afford to buy fuel for the generator because my crops were dying due to lack of water. That’s when I moved to Qalat to sell vegetables.”

Drilling private wells in Zabul increased dramatically during a prolonged period of drought in the late 1990s. Farmers were forced to take measures into their own hands as rivers and springs dried up and their crops suffered.

But the drilling continued after the drought ended, with individuals boring ever-deeper wells to guarantee their own water supply. Officials now estimate some 5,000 bore holes are currently in operation.

Mohammad Hashim, 34, who lives in the Tarnak area of Zabul city, said, “In the early years, these deep wells were dug only in the southern part of the Tarnak river.

“Now they have decreased the level of water to the point where most springs, as well as existing wells, have run dry. Even the Tarnak river no longer has water in the spring or summer seasons.”

The southern province of Zabul has a mostly rural population of some 305,000 people, according to latest figures.

Two-fifths of the province is mountainous or semi-mountainous terrain, with the remainder used to grow crops including almonds, raisins, apricots and black caraway seeds.

Baaz Mohammad Harifal, an administrative manager at the department of agriculture, told IWPR that Zabul currently had around 65,000 hectares of arable land on which farmers grew mainly wheat, nuts and fruits, often for export.

He said that his officials were not only working to modernise the province’s irrigation systems in but also actively pushing for farmers to plant new crops, such as soya, which required less water.

He said that the exact number of private wells was not known as many had been dug in Taleban-controlled areas. He estimated thetotal figure to be around 5,000, but warned that number was likely to rise.

“We’re working hard to provide information on drip and sprinkler irrigation system to farmers so they’ll be able to irrigate their land using less water,” he concluded.

Hafizullah Shah Noori, the director of the department of agriculture, irrigation and livestock, acknowledged that thousands of these deep, private wells now threatened local livelihoods.

While there was no easy fix to the problem, he said that given time and an adequate budget, his officials would find a solution.

“We’re currently working on a number of small projects to rejuvenate streams and reservoirs,” he said. “We will find an answer.”

Haji Mohammad Sadiq, a businessman dealing in dried fruits in Qalat, said many farmers were noticing a drop in their yields, with crops of almond and raisins apparently worst affected.

He said, “Water from the wells seems to contain fewer minerals and nutrients which is why it’s affecting people growing fruit in their private plots. Wheat, corn and vegetables don’t seem to have been impacted so much but fruit exports are down.”

Agricultural engineer Masoom Azimi told IWPR that there was little doubt these wells had reduced groundwater levels and draining springs and rivers.

He urged the government to invest in dam construction, as well as planting more forests which studies have shown boost water table levels.

Gul Islam Sial, a spokesman for the Governor of Zabul, said, “We’ve asked central government several times to begin the construction of dams and reservoirs.

“Building these projects will mean farmers are no longer compelled to drill deep wells. It will allow us to store snow and rainwater and can resolve the issue of a lack of water for landowners and our people.”

A shortage of drinking water is another increasingly difficult issue in the province.

Qalat resident Abdul Salam said he had had to deepen his existing well further so as to obtain more water.

“Previously I’ve been able to access water at a depth of 10-50 metres,” the 52-year-old told IWPR. “But now, having drilled down to a depth of 80 metres I can still barely get enough.”

He continued, “Every year I have to drill deeper again as the water level drops. A great deal of my income is spent on maintaining the well.”

Mirwais, 27, a resident of the Omaki area of Qalat who farms around 17 acres, said his crops used to be able to survive on surface water from streams.

He added, “Now not only are we paying for wells to be dug and maintained but we’re also paying for fuel for the generator. These are expenses that many can’t afford.”

Despite the water shortages, not everyone is unhappy. Abdul Aziz, 37, who runs a drilling business, said he was thriving as a result of the high demand for deeper bores.

He charges three to four dollars per metre of drilling, with this figure rising if the ground is found to be hard rock rather than just soil. He said he made 10 to 13 dollars a day.

“From the end of winter right through the summer customers are either asking me to drill new wells or drill existing ones deeper,” he continued.

“I’m so busy I hardly have time to think. Farmers and homeowners alike are noticing that groundwater levels are reducing every year.”