Price of Marriage in Turkmenistan

Price of Marriage in Turkmenistan 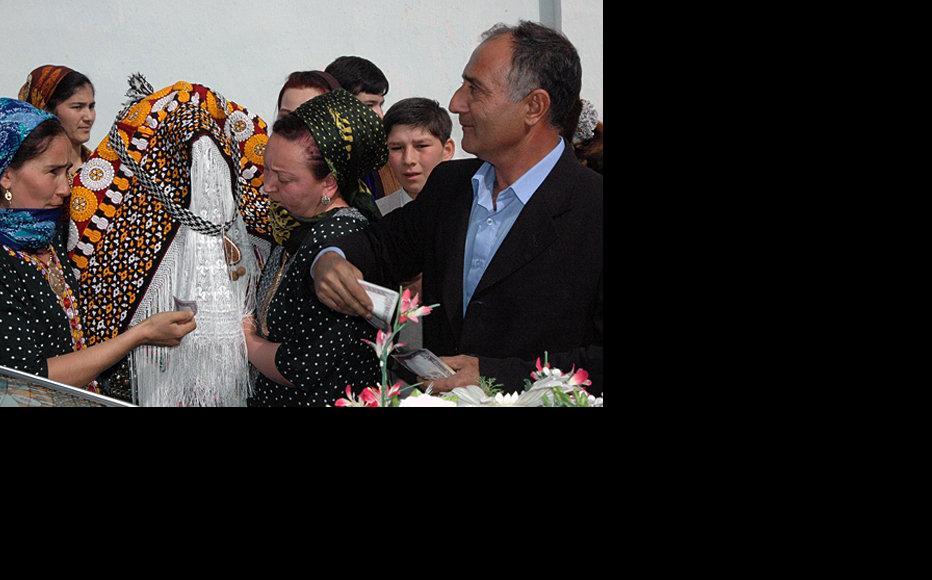 Bride in traditional Turkmen dress. (Photo: IWPR)
The link has been copied

An old tradition where grooms make a substantial payment to the bride’s family is flourishing in Turkmenistan, and the sums changing hands are getting higher.

The custom of paying for a bride, known as “kalym”, has seen a significant revival in Turkmenistan in the years since the Soviet period, when it was officially banned. Nine of ten Turkmen marriages contracted in 2011 involved a transaction of this kind.

A kalym payment can reach up to 10,000 US dollars. A local Muslim cleric said the highest prices were paid for marriage to a woman with a university education, in a public sector job, or skilled in a traditional craft.

Maral, an 18-year-old in the northern town of Kunya-Urgench, described how her future husband spotted her at a friend’s wedding, then sent go-betweens to discuss terms for marriage.

The bride said she was pleased with the financial settlement and did not feel like a commodity.

“I’m happy that I successfully got married and joined a good family, and that my husband and his parents treat me like a person, not purchased goods,” she said.

Others argue that the practice tends to do just that.

Some young women like Gyzylgul, 18, say they will feel “undervalued” if the kalym paid for them is less that that of their peers.

The cost of marriage is a huge burden for the groom’s parents, according to Annameret from Tejen, a small town in southeastern Turkmenistan.

“You can get a good bride price for a girl, so many families are happiest when a baby daughter is born, whereas a son’s marriage means ruin, debt and a continual search for money,” Annameret said.

In Keshi, a village on the fringes of the capital Ashgabat, local elder Amannazar-aga is a firm believer in the tradition, which he says provides a good financial foundation for marriage. Now 70, he says most of the weddings he has witnessed have involved kalym, and he says this encourages young couples to take their vows seriously, whether they dated beforehand or meet only at the wedding in an arranged matter.

“The bride price strengthens the marriage and keeps newlyweds from divorcing,” he said.

Unofficial statistics suggest that Turkmenistan has one of the world’s lowest divorce rates, with formalised separation affecting just over one in 1,000 families.

A civil registry official in Ashgabat attributed this largely to the kalym tradition.

“Men know that if they get divorced, their parents will lose the money they paid as kalym, and that remarrying will cost even more,” she said.

She conceded, however, that the custom could also force women to stay in unhappy marriages.

“The bride price makes the girl tractable, because she knows it would be difficult to get married a second time,” she said.