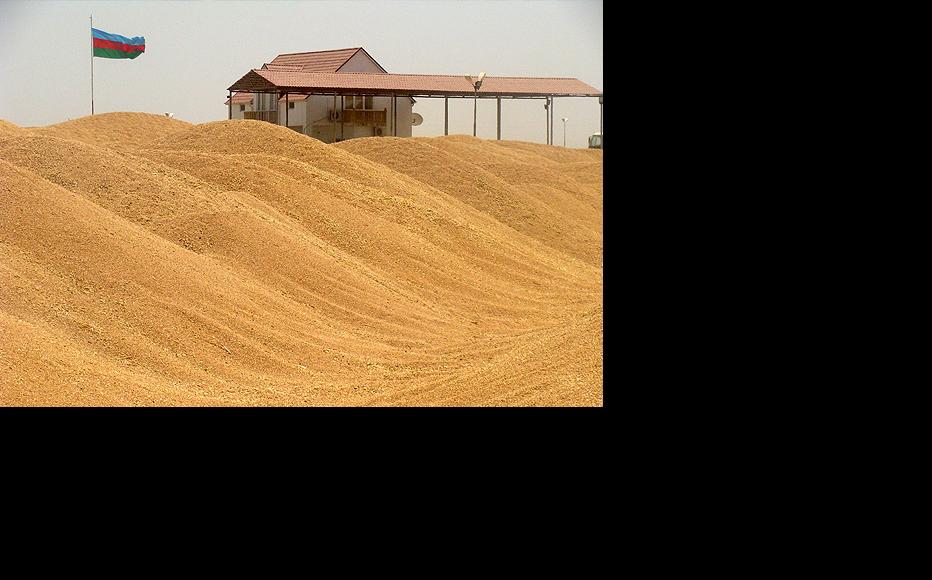 Azerbaijan’s grain harvest this year was far lower than expected, partly due to bad weather but also because of chronic underpending. (Photo: Sabuhi Mammadli) Azerbaijan’s grain harvest this year was far lower than expected, partly due to bad weather but also because of chronic underpending. (Photo: Sabuhi Mammadli)
The link has been copied

Bread prices are rising in Azerbaijan because of a poor wheat harvest and a halt in supplies from Russia and Kazakstan.

The government’s statistical agency says only 1.3 million tons of wheat was harvested this year, compared with over two million tons in 2009.

Grain prices have risen in response. A kilogram now costs 25-30 qapiks, around 35 US cents, up from just 15 qapiks last year.

The increases have been passed on to bread prices, so that a standard loaf costs 40 qapiks in Baku shops, ten more than earlier in the year.

“And those places that have not raised bread prices have reduced the weight,” Qadir Ibrahimli, an expert from the Standard of Living Centre, said. “In almost all shops at the moment, a normal loaf weighs 200-250 grams instead of 400.”

Rafiq Orujov, a 47-year-old Baku father, who works as a builder and earns 250 manats, 312 US dollars, a month, is a typical example.

“I have a large family, and I’m the only one who works,” he said. “We get through three or four loaves a day. We used to buy it for 30 qapiks a time, but now it’s 40. That means we’re spending 30-40 qapiks more every day, even though my wage hasn’t increased in four years.

“If prices continue rising, then we’ll only be able to afford to eat bread, because there just won’t be the money for anything else.”

Normally the shortfall could be made up by importing grain, but experts say major regional producers Russia and Kazakstan have blocked sales abroad after suffering from severe drought over the summer.

Azerbaijan’s statistical agency says 1.85 million tons of grain have been imported so far this year, 970,000 tons less than at the same point last year.

Vugar Bayramov, head of the Centre for Economic and Social Development, said Azerbaijani importers were unused to looking further afield.

“Kazakstan’s grain is also the cheapest in the region,” he said. “Looking for new countries to buy grain from costs time and money. This whole process is contributing to the price rises.”

As a result, Bayramov said, Azerbaijan was facing a grain shortage, and he accused government agencies of not doing enough to deal with the situation.

They had “yet to take steps to meet the demand for bread and avoid shortages of this strategically important item”, he said.

The agriculture ministry said it had urged the government to drop the 18 per cent value-added tax, VAT, payable on imported grain, but this had been turned down.

Bayramov warned that as import prices rose, so would the cost of bread in Azerbaijan unless VAT on grain was abolished.

“If this trend continues unchanged, then by the end of the year the price of a standard loaf could reach 50 qapiks,” he said.

This year’s poor harvest may be due to adverse weather conditions, but low productivity is a longer-standing problem in Azerbaijan’s farming sector.

Farmers say they cannot afford to invest in modern machinery and methods.

Asaf Qasimov, a farmer in the Aghjabadi district, said that in a good year, his family could rent 20 or 30 hectares of land, but they would rarely bother to plant grain on it.

“There are no barns to store the crop, so you have to sell it in June or July for a very low price, which isn’t ideal,” he said. “Once a farmer has planted grain, he won’t do it a second time.”

Rovshan Agayev of the Social Union of Economic Initiatives, argues that in a climate where prices are rising globally, the only solution was to boost productivity in Azerbaijan. He also believes the government should buy up grain stocks to create a national reserve.

The agriculture ministry says yields are poor, sometimes as low as a third of what European farmers can achieve.

The ministry it says it is doing its best to help farmers by issuing grants to them.

Ilgar Mustafayev, a farmer in the Qazakh district, said the effect of the government assistance was dissipated by corruption.

“The government pays 80 manats [100 dollars] for every hectare of land, but the farmer only gets 50-60 manats of it, since some of the money has to be paid in bribes to officials,” he explained.

Azerbaijan
Economy
Connect with us