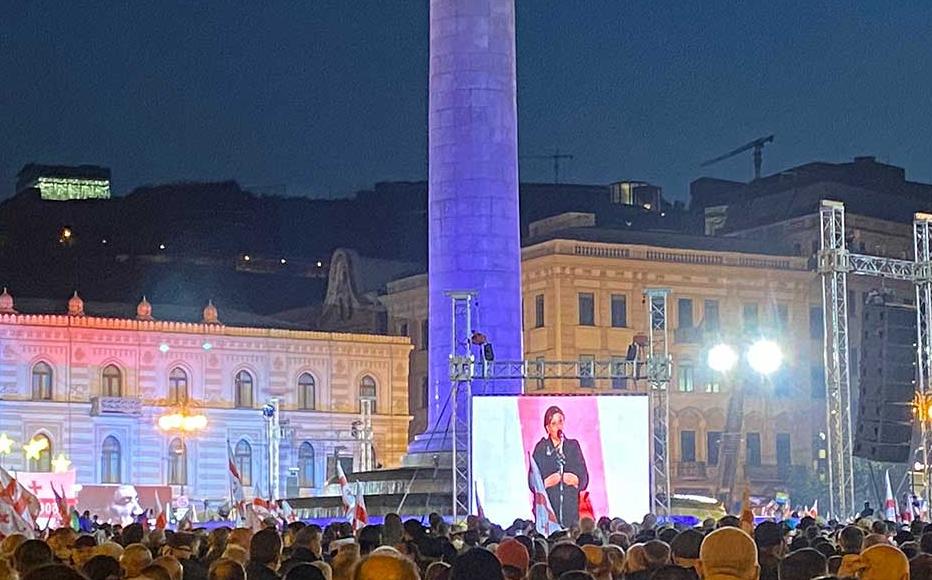 Thousands of protesters gathered in Freedom Square, in central Tbilisi, on October 14, 2021 and called for the release of former Georgian President MIkheil Saakashvili, who was arrested on October 1. © IWPR Posters by the opposition party European Georgia - Movement for Freedom mocks Bidzina Ivanishvili, Georgia's wealthiest man and founder of the ruling Georgian Dream party. He is still believed to be pulling the strings in the country's politics. © IWPR 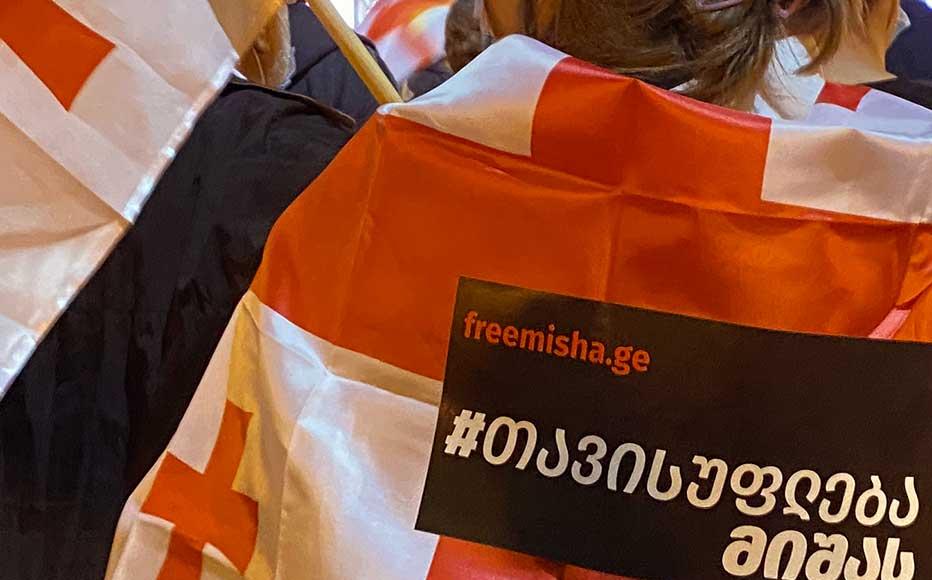 A supporter of former Georgian President MIkheil Saakashvili attends the rally calling for his release on October 14, 2021 with the poster #freemisha. © IWPR 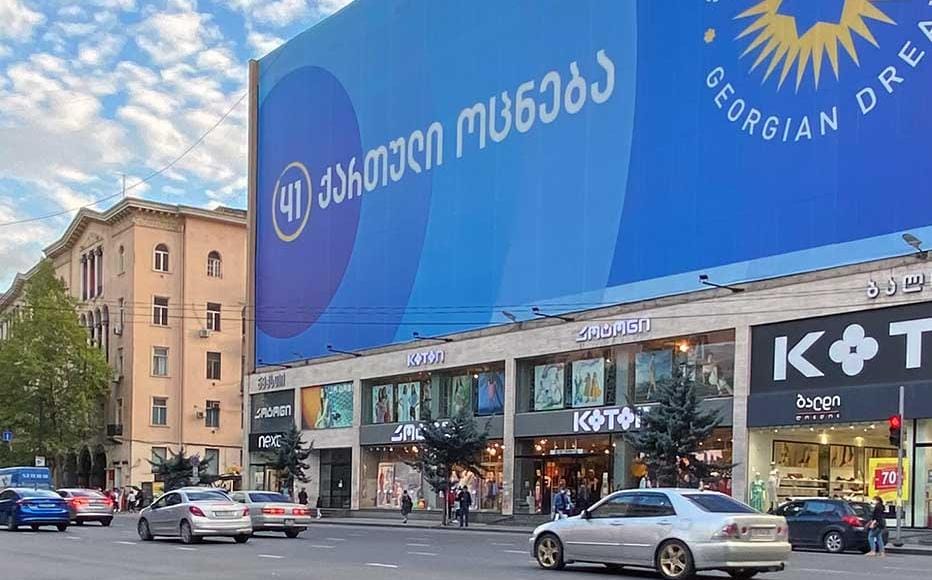 A gigantic banner of the ruling party, Georgian Dream, dominates Pekini Avenue, in one of the capital's busiest districts. International observers reported significant financial imbalances in the election campaign between Georgian Dream and the opposition. © IWPR 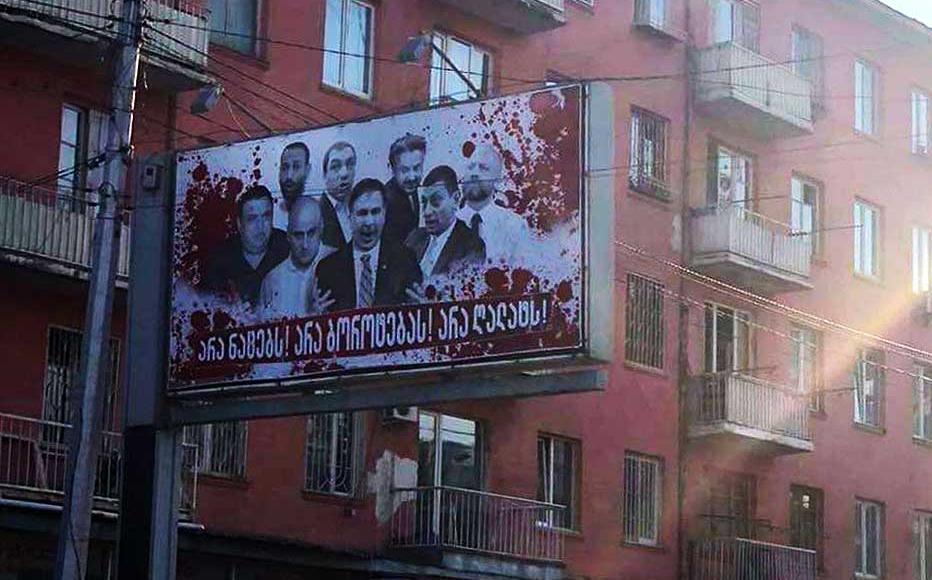 A banner portrays opposition politicians and journalists critical of the government surrounded by blood stains. The slogan "No to Nazi! No to evil! No to betrayal!" © Anastasia Mgaloblishvili
The link has been copied

Georgia is bracing itself for the second round of voting in municipal elections that will have an outsized impact on the power struggle between the ruling Georgian Dream (GD) party and opposition forces, in particular the United National Movement (UNM).

GD, in power since 2012, won a commanding lead of 46.7 per cent in the first round earlier this month in a vote overshadowed by the dramatic return of UNM founder Mikheil Saakashvili.

The arrival of Georgia’s third president, who defied charges of abuse of office and threat of arrest, caught the authorities off guard, enthralled the media and added fuel political tensions.

Arrested within hours, the pro-western politician remains behind bars on hunger strike. Concerns over his health are growing along with calls for his release in Georgia as well as his adopted home Ukraine, where he heads a government agency steering reforms. On October 27 an estimated 60,000 people gathered in the capital Tbilisi calling his arrest to be an act of political persecution.

Saakashvili supporters claim that his return tilted the UNM’s fortunes as the party bagged 3.53 per cent more votes than the 2020 controversial parliamentary elections, placing it as the second political force with 30.7 per cent.

The toxic rhetoric that has poisoned the political landscape for months has deepened the uncertainty. Opposition politicians, including GD ally-turned-foe former prime minister Giorgi Gakharia, have been accused of plotting against the state and the church. In a country where the Orthodox Church is regularly deemed to be the most trusted institution, this is a serious allegation.

“The government’s general rhetorical weapon is creating an enemy out of the opposition. Religion and xenophobia are the main topics used to create this image,” said Ghia Nodia, professor of politics at Ilia Chavchavadze State University.

Saakashvili’s return, he added, has “mobilised supporters of both the UNM and Georgian Dream… and increased the use of religion and other sensitive topics for Georgians to further polarise and divide the society”.

“People are lied to and cannot make an informed decision on election-day,” she said. “They are victims of superficially created discreditation campaigns, as a result of which they believe that some [politicians] are good and some are bad. And so, they end up circling around the ones that are artificially created as goo’ on election day.”

In September, Tbilisi was plastered with banners portraying various opposition politicians and critical media surrounded by blood stains and the slogan “No to Nazis, No to Evil, No to Betrayal.”

Two political parties, Droa and the UNM, along with Georgian election watchdog International Society for Free and Elections and Democracy (ISFED) filed complaints to the Central Election Commission (CEC). The ad, they argued, violated the Georgian Election Code, whichbans “propaganda for violence”.  The CEC responded that since the banners were ordered by an individual they could not be “considered a part of an election programme”.

Sulkhan Saladze, former chairman of the Georgian Young Lawyers’ Association, dismissed the CEC’s position, arguing that the ruling party were clearly behind the stunt.

“For some reason, ‘someone’ had the motive to do this right before an intense election campaign,” he said, adding that some posters ended up replacing Covid-19 vaccination ads “which could not happen without a prior green light [from the government]”.

For Buziashvili, the good-versus-evil narrative is also actively supported and intensified on social media. In October, the ruling party’s official Facebook page posted anti-UNM material, including a video collage of Saakashvili called “Let’s end Nazis” and another one captioned “United National Movement is a radical anti-church grouping”.

After the first round of municipal elections, an observer mission from the Organisation for Security and Cooperation in Europe (OSCE) described the campaign as “an unlevel playing field” and flagged huge in of financial means and misuse of administrative resources. While candidates were able to campaign freely, observers described a campaign “marred by wide-spread and consistent allegations of intimidation, vote-buying, pressure on candidates and voters”. NGOs monitoring the elections reported dozens of suspected cases of electoral fraud including “carousel voting”, with voters bussed into multiple polling stations as an organised group.

As parties focus on attacking each other, policies about how to support the country amid rising coronavirus cases and a struggling economy are overshadowed, if present at all. This has been the leitmotif since parliamentary elections in October 2020 were won by GD but rejected by the opposition, which boycotted parliament for seven months. A EU-brokered deal unlocked the political paralysis and foresaw early parliamentary elections in 2022 if Georgian Dream would get less than 43 per cent in the local vote, set rules for power-sharing and outlined reforms.

In July, however, the ruling party unilaterally withdrew from it, blaming the UNM for refusing to sign. The withdrawal stirred the ire of international partners from Brussels to Washington, whose patience is running thin by what the US called in a statement the “repeated setbacks to Georgia's democratic future”.