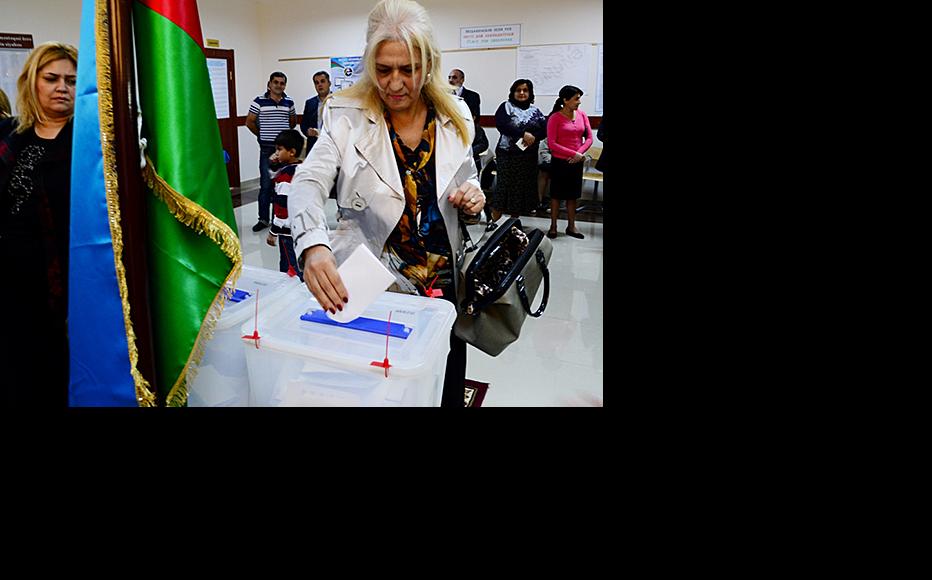 Officials and pro-government journalists in Azerbaijan are furious with the Organisation for Security and Cooperation in Europe (OSCE) after its observer team described the October 9 presidential election as “seriously flawed”.

According to official results, the sitting president, Ilham Aliyev, won the poll with 85 per cent of the vote, while his main challenger, joint opposition candidate Jamil Hasanli, scored just five per cent – an outcome that the OSCE said was at least partly the result of unfair practices.

“Looking at the facts our mission has gathered over the six weeks we have been observing the electoral process, the stark reality is that this process has fallen well short of OSCE commitments in most areas,” Tana de Zulueta, head of the long-term election observation mission deployed by the OSCE’s Office for Democratic Institutions and Human Rights, told reporters. “The limitations placed on the fundamental freedoms of assembly, association, and expression, the lack of a level playing field, the allegations of intimidation all came in the lead-up to an election day that our observers found to be seriously flawed.”

The monitors said they had seen clear cases of ballot-box stuffing in 37 polling stations, and irregularities of all kinds in “an unprecedented 58 per cent of the stations observed”.

Their assessment caused uproar at the press conference in Baku where the report was issued. Journalists from pro-government media, as well as bystanders, were so enraged that De Zulueta had to leave the room until the event ended.

“The OSCE is good for nothing any more. The OSCE must be destroyed,” shouted Ittafaq Mirzabeyli, a journalist with the Khalq newspaper, the official mouthpiece of the presidential administration. Other journalists at the event accused the OSCE of double standards and bias.

The US State Department agreed with the OSCE’s assessment. Spokesperson Marie Harf pointed out that Aliyev’s government had “maintained a repressive political environment” and had “interfered with the media and civil society routinely, sometimes violently interrupted political rallies and meetings… and jailed a number of opposition and youth activists”.

“It is with regret that we conclude that this election fell short of international standards,” she told journalists, according to a transcript issued by the State Department.

Most opposition politicians in Azerbaijan welcomed the OSCE’s summary, saying its observers had seen through a carefully constructed façade of fairness.

“What we’ve been witnessing is a theatrical performance, the kind of thing a concentration camp head would put on for the Red Cross. The prisoners all vote for him, and there’s some alternative candidate manufactured just for show. And then they bring in the Red Cross people and tell them it’s democracy,” Hikmet Hajizade, a leading figure in the opposition Musavat party, told IWPR.

IWPR reporters on the ground saw serious breaches of the rules taking place, such as groups of voters being taken from one polling station to another to cast multiple ballots. (See Azerbaijanis Vote, Again and Again.)

Not all international observers shared the OSCE’s low opinion of the vote, however. Monitors sent by the Commonwealth of Independent States, a former Soviet grouping, were full of praise for what they said was a free and fair election. And Robert Walter, a British Conservative politician who headed the observer mission sent by the Parliamentary Assembly of the Council of Europe, told a press conference that his team “did not witness a single serious violation”.

“It appears that they prefer to assess the election process not by the criteria of popular will, but by some considerations known only to them,” he said in comments published on the party’s official web site. “I think the preliminary report by the OSCE is biased and not objective. This report shows disrespect towards the expressed choice of the Azerbaijani people.”

Ali Hasanov, the head of the presidential administration’s political department, told Azertag news agency that Azerbaijan might now reconsider its membership of the OSCE.

“This announcement by the monitoring group is disrespectful of the wishes of the Azerbaijani voter, and simultaneously a blow to the prestige of the OSCE itself. It isn’t based on a single serious fact, and refers just to the lies spread by the opposition,” Hasanov said. “If things carry on like this, then Azerbaijanis will have to re-examine their relationship and cooperation with the OSCE.”