As official results show a resounding win for Ilham Aliyev, reporters on the ground spot voters so keen to vote that they do so repeatedly.

As official results show a resounding win for Ilham Aliyev, reporters on the ground spot voters so keen to vote that they do so repeatedly. 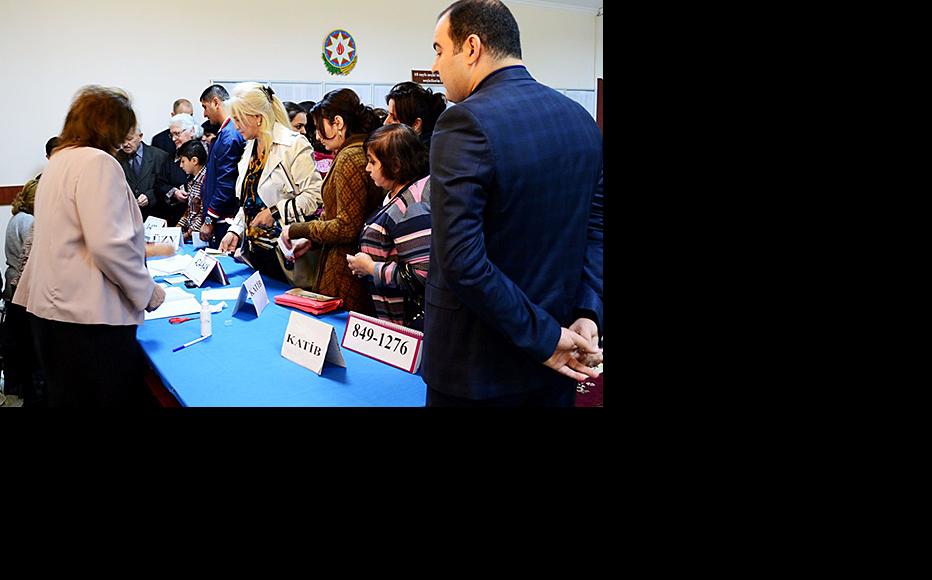 Voters go to the polls in Azerbaijan's presidential election. October 9, 2013. (Photo: Javid Gurbanov)
The link has been copied

Election officials in Azerbaijan have declared the incumbent Ilham Aliyev the winner of the October 9 presidential election with a massive 85 per cent of the vote, but opposition activists – whose candidate polled just five per cent – have declared the victory fraudulent.

Aliyev has dominated the country since inheriting the presidency from his father Heydar Aliyev in 2003. Opposition parties were hoping that by rallying behind a single candidate, Jamil Hasanli, they would have more chance of unseating him than in previous elections.

Isa Gambar, the leader of the opposition Musavat party, which backed Hasanli, said the election was a complete fraud and the results were fabricated.

In particular, he said, observers had seen multiple examples of a practice known as the “carousel”. Common in many of the former Soviet countries, this involves transporting people from one polling station to another so they can vote many times.

“The carousels amounted to a recognition by the government that it was unable to win the popular vote by honest means,” Gambar told the Turan news agency.

Eldar Namazov, who once worked as adviser to Heydar Aliyev but now heads the EL opposition party, agreed.

“There was falsification everywhere. That used to go on at the end of the voting process, but now it’s happening from the very start,” he told IWPR. “The government believes in itself so little that it commits fraud from morning onwards. These are the dirtiest elections in the history of Azerbaijan.”

Namazov said that when he went to vote at his local polling station, his name had been inexplicably left off the list of voters.

The first official exit polls predicted the results fairly accurately, crediting Aliyev with 84 per cent, just below his final tally. More worryingly, a smartphone app that offered users live updates on the vote showed Aliyev winning three-quarters of the vote before counting had even started.

The app was approved by the Central Election Commission, which said the commercial developer had been running tests beforehand and accidentally made these public. It said the testing was done using data from the 2008 presidential election. But that raised questions about why the candidates shown were from the 2013 polls.

IWPR reporters on the scene at polling stations spotted blatant breaches of the voting rules. One of them, Ayten Farhadova, was taken off to a police station when she tried to film people voting multiple times at Polling Station No. 5/District 43 in Sumgait, a town near the capital Baku.

“Someone who said he was a director of communal services handed out ballot papers to people whose names weren’t on the voter list. When I tried to film this happening, they called the police, who came in arrived cars. I was taken to the police station and let out only an hour later,” she said.

Jasur Sumerinli, another IWPR contributor, saw a group of school pupils being brought in to vote at Polling Station No. 7/District 27 in Baku. When he tried to ascertain whether they were eligible to vote, he was expelled from the polling station.

Ulviya Mamedova, 33, a Baku resident, told IWPR of her own experience of arriving at a polling station only to discover that someone had already voted in her name.

“They suggested that I take a ballot paper and vote in someone else’s name,” she said. “Naturally I refused and asked to file a complaint. Then they crossed out the [other person’s] signature beside my name and suggested I sign above it. I wrote out an official complaint and sent it to the Central Election Commission.”

Aliyev’s allies in the governing Yeni Azerbaijan party saw no problem with his victory, and had began celebrating in central Baku before the polling stations closed.

A monitoring team sent by the Commonwealth of Independent States (CIS), a grouping of former Soviet states led by Russia, was full of praise for what it said was a free and fair election.

“Observers are watching the voting process at a number of polling stations across the country. The presidential election has been organised to the highest standard,” said Alexei Sergeyev, secretary general of the CIS Parliamentary Assembly, according to APA news agency.

Monitors from the Organisation for Security and Cooperation, meanwhile, said “significant problems were observed throughout all stages of election day processes”, identifying in particular problems with the count and in some places, signs of ballot-stuffing.

That was aside from the weeks leading up to the polls, which Tana de Zulueta, head of the OSCE Office for Democratic Institutions and Human Rights said were marked by “limitations on the fundamental freedoms of assembly, association, and expression, the lack of a level playing field, the allegations of intimidation”.