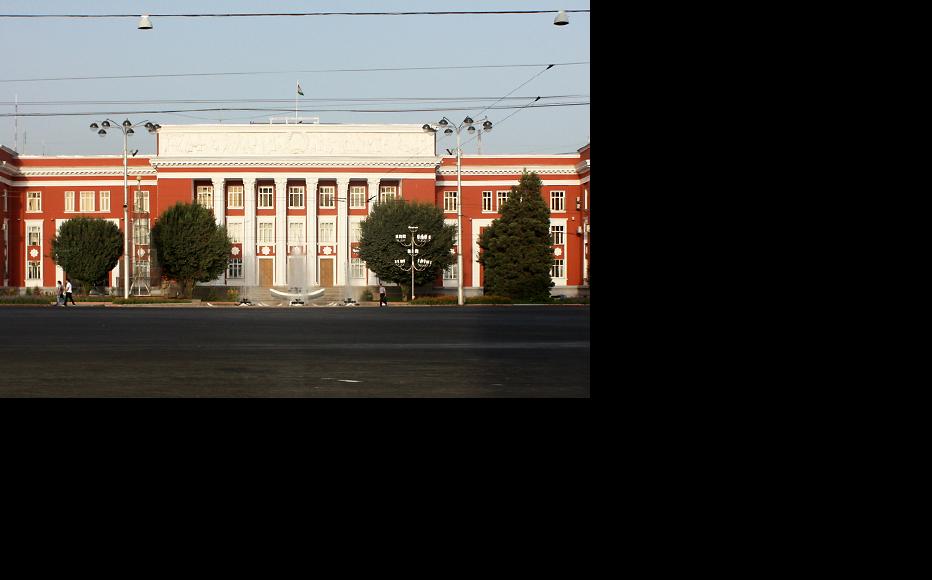 The Tajik parliament building in Dushanbe. (Phone: Rjruiziii/Wikimedia Commons)
The link has been copied

A new  law that will restrict the activities of charity organisations and human rights groups in Tajikistan is already having an effect, as human rights activists and others quietly leave the country.

Amendments to the existing law on non-government organisations (NGOs) were passed by both houses of Tajikistan’s parliament in June and July, and received the final sign-off from President Imomali Rahmon on November 23.

The changes are similar to similar restrictions introduced in Russia and Azerbaijan. A similar bill in Kazakstan will come into force after President Nursultan Nazarbaev gives his assent.

The amendments give the Tajik government greater powers to examine NGOs’ funding streams, including grants from foreign donors, as well as to track their expenditure. NGOs will be under an obligation to report how much funding they receive to the authorities.

In a presentation to the lower house of parliament in June, Justice Minister Rustam Shohmurod made it clear that the government wanted to exercise “scrutiny over the spending of funds that NGOs receive from foreign sources”.

He insisted the main aim was to curb financial flows that supported terrorism, crime and money-laundering.

No one in the NGO sector seems convinced.

A number of NGO leaders have simply resigned since the summer, while IWPR understands that at least ten others have gone abroad in recent months. The latter have taken up opportunities to study in various European countries, ostensibly to improve their skills. In reality, there is a danger that they will never return.

Over the last two decades, Tajikistan’s NGO sector has played an important role, bringing in donor funding – often to plug gaps in welfare provision that the government could not fill – and providing employment in a generally woeful economic climate.

As of January this year, Tajikistan had 2,800 registered NGOs, although not all were active. In 2013, the last year for which government data are available, these organisations received 4.5 billion somoni (around 675 million US dollars) in foreign funding.

Unlike the equivalent Russian legislation, the Tajik regulations do not categorise NGOs funded from abroad as “foreign agents”.

This summer, around the time the legislation went before parliament, a number of NGOs were subjected to financial inspections. What was particularly alarming was that they were carried out by the State National Security Committee, Tajikistan’s secret service, rather than by the financial authorities.

Oinikhol Bobonazarova, a highly-respected veteran rights activist who heads the Perspektiva Plus group, told IWPR that “these inspections are designed to punish rather than to correct errors. So whenever they uncover errors, they impose huge fines. Several organisations have been fined large sums of money so far.”

Addressing an OSCE meeting in the capital Dushanbe in July, Nigina Bahrieva, who heads the Nota Bene rights group, described the lack of clarity surrounding the latest inspections.

“We don’t know to whom we have to submit which documents. Each institution has its own rules,” she said.

According to Asomiddin Atoyev, head of the Association of Internet Service Providers in Tajikistan, certain kinds of NGO are singled out for trouble – human rights organisations, and groups that focus on the tax and financial authorities, corruption and other sensitive matters.

“For instance, one organisation that deals with economic issues, criticises the government’s economic activities, and offers economic solutions, is under pressure. Various human rights NGOs are under pressure, and some of them have paid huge fines,” Atoyev told IWPR.

The environment has worsened since September, when the government launched a wave of arrests of members of the Islamic Rebirth Party (IRP). The party held seats in parliament until earlier this year, and was regarded as the only real opposition force. As the campaign mounted, the authorities ordered the IRP to shut down and accused it of complicity in a coup plot. (See Tajikistan's Embattled Islamic Party.)

The arrests have had a chilling effect on NGOs, and some human rights defenders refrained from commenting on these cases, apparently for fear of running into problems themselves.

“The arrests of IRP members and the accusations of terrorism have affected civil society,” a local political expert told IWPR, on condition of anonymity. “Civic activists anticipate that they may be next, so they’ve quietly started to seek ways to survive. Most free-spirited intellectuals left the country some years ago, and those who stayed here were hoping for the best, until the last moment. Now, however, they see nothing positive. They can clearly see that life is getting more and more difficult. So they are leaving the country under various pretexts.”

The analyst predicts that things can only get worse.

“The government has wiped out the political opposition. Now that it [opposition] is out of the picture, the time has come to suppress civic activists, and after that it will be the turn of the free press and journalists. It isn’t possible to wipe out one segment and leave the rest.”