Neighbourhood Watches as Azerbaijan Arms Up

Neighbourhood Watches as Azerbaijan Arms Up 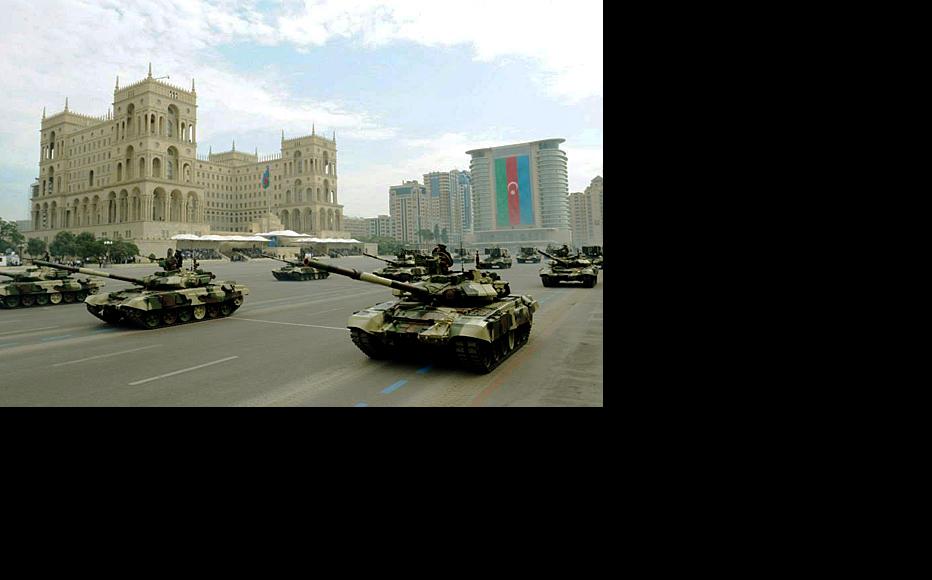 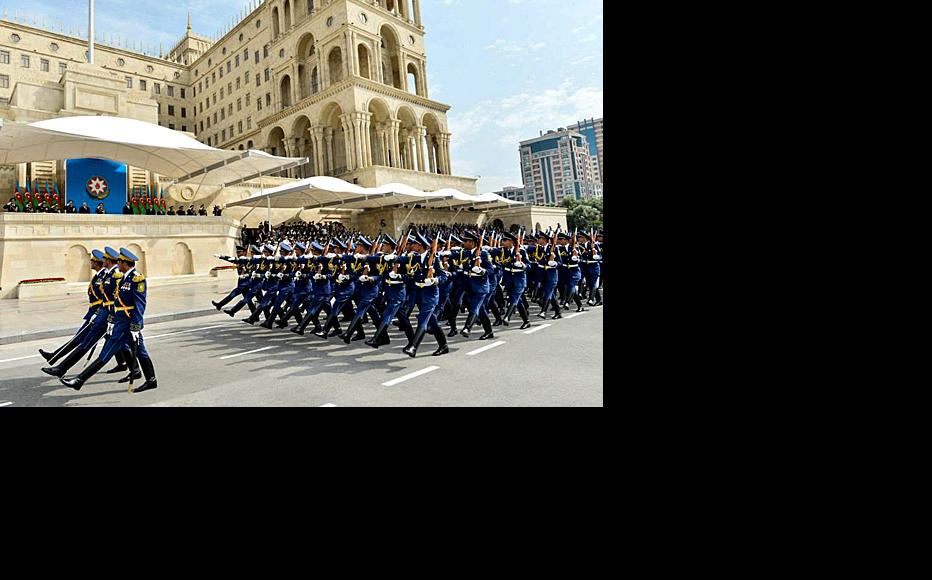 Soldiers march past in a military parade in Baku, June 6, 2013. (Photo: Official website of the president of Azerbaijan) President Aliyev addresses the crowds. (Photo: Official website of the President of the Republic of Azerbaijan)
The link has been copied

Azerbaijan’s rapid arms build-up is cause for concern in the region, with some defence analysts warning that it heightens the risk of renewed conflict.

President Ilham Aliyev frequently boasts of the amount of money his oil-rich state can afford to spend on weaponry. Appearing at a military parade in Baku on June 26. he took the opportunity to remind everyone that at 3.7 billion US dollars, annual defence expenditure is nearly twice the size of neighbouring Armenia’s entire government budget. A decade ago, Azerbaijan’s defence budget stood at 160 million dollars.

“In recent years we have purchased the most sophisticated hardware,” Aliyev said in his address at the parade. “We have purchased about 100 combat and transport helicopters, dozens of combat aircraft, and the most advanced anti-aircraft systems. [Our] armoured vehicles, modern tanks and artillery pieces are capable of destroying any enemy target.”

Aliyev noted that all this hardware was not just for show; it was needed because of the unresolved conflict with Armenia over Nagorny Karabakh.

In mid-June, the Moscow paper Vedomosti reported that Russia was supplying armoured vehicles and artillery worth up to one billion US dollars to Azerbaijan.

The news was of particular concern to Armenian officials, since Moscow is both a close ally and part of the three-member OSCE group mediating in the Karabakh conflict, but appears happy to profit from Azerbaijan’s spending spree.

On a visit to Armenia, Nikolai Patrushev, secretary of Russia’s Security Council, tried to portray the sales as no more than normal business, and argued that it would not change the military balance in the region.

“We must not fall into a panic because Azerbaijan has acquired military equipment from Russia. Azerbaijan buys weapons from other countries as well. Russia has its own relationship with Azerbaijan, and it bases that relationship on its own interests,” Baghdasaryan said.

Richard Giragosian, director of the Centre for Regional Studies in Yerevan, said reports of massive arms shipments from Russia had revived fears that the delicate balance of power in the South Caucasus was tipping in Azerbaijan’s favour. It might also indicate an intention to re-take Karabakh by force.

The Nagorny Karabakh region was part of Soviet-era Azerbaijan but has been controlled by a local Armenian administration since the early 1990s war that ended in a truce but no peace deal.

“Although international reactions to Azerbaijan’s latest procurement of offensive weapons have been largely muted, there is a clear imperative for greater concern over the now shifting balance of power between Armenia and Azerbaijan, which is an inherent threat to the fragile ceasefire,” he said.

“In the past two years, there’s been a marked upsurge in clashes along the so-called ‘line of contact’ that separates Karabakh forces from Azerbaijani troops. And the approximately 1,000 kilometre-long border [between Azerbaijan and Armenia itself] has also seen a spike in sniper fire and sporadic cross-border attacks. This further demonstrates the fragility of the security situation and the shifting balance of power, while at the same time confirming the risk that a localised conflict could rapidly escalate and expand, and possibly swiftly draw in external interested powers, including Russia, Turkey and perhaps even Iran.”

“What makes this current situation much more serious is the danger that Azerbaijan’s stronger threats will now be matched by an increasing readiness to use offensive military action to vent its frustration,” Giragosian added.

The OSCE Minsk group – consisting of Russia, the United States and France issued a joint statement on June 18 urging the leaders of Azerbaijan and Armenia to renew their commitment to neither use nor threaten force.

“We also appeal to them to refrain from any actions or rhetoric that could raise tension in the region and lead to escalation of the conflict,” the statement said. “The leaders should prepare their people for peace, not war.”

Those sentiments were not reflected in President Aliyev’s remarks at the parade eight days later. He made it clear the Karabakh conflict was not yet over.

“Our army must be prepared to restore the territorial integrity of our country at any time and in any way,” he said.

Nevertheless, Jafarli argues that such bellicose rhetoric is not necessarily cause for alarm. He said the Azerbaijani defence establishment’s enthusiasm for buying large quantities of expensive foreign weapons had a lot more to do with the kickbacks earned on the deals than with any real enthusiasm for going to war.

“It’s all about corruption and the illegal commissions that we call ‘shapka’ in the post-Soviet world. Armament is a very expensive business and needs the injection of a huge sum of money. The more you allocate, the more opportunities there are for corruption, for ‘shapka’,” he said.

Elkhan Mehdiyev, a political and defence affairs analyst at the Azerbaijan Atlantic Association, agreed that corruption was a major factor in the size of the contracts being signed.

“No report is ever delivered, even to parliament, on what the government has acquired and how much money was spent on it,” he said.

According to the Stockholm International Peace Research Institute, which publishes an annual report called “Trends in International Arms Transfers”, in 2011-12 Azerbaijan bought surface-to-air and anti-ship missiles from Israel, 60 armoured personnel carriers from South Africa, 39 helicopters including gunships from Russia, 30 heavy multiple rocket-launchers from Turkey. It also acquired 16 drone planes from Israel and another ten from Austria.

Those numbers do not include deliveries under the Russian contract revealed by Vedomosti, which includes a selection of conventional and rocket artillery units, armoured personnel carriers, and up to 94 T-90 tanks, a recent model that Armenia does not have.

Armenian officials are concerned about the implications of a rapid arms build-up in Azerbaijan, but point to the enduring security relationship with Russia, which maintains a large army base at Gyumri.

Defence minister Seyran Ohanyan said his country was not going to take place in an arms race, but was keeping a vigilant eye on developments.

“Azerbaijan’s weaponry can hardly not concern us,” he told reporters last month. “But we must bear in mind that our cooperation with our strategic partner Russia is at such a high level that we can maintain the regional balance of power not just quantitatively, but qualitatively.”

Sergei Markedonov, a political analyst and Caucasus expert at the Institute for Political and Military Analysis in Moscow, expressed a similar view, saying Russia’s bonds with Armenia were fundamentally different to its trade with Azerbaijan.

Hrachya Petrosyants, a defence expert with close links to Armenia’s defence ministry, said his own country was acquiring more arms.

“Although the weapons bought from Russia don’t upset the regional military balance, we must be attentive all the same. Armenia, too, is buying weapons and strengthening its arsenal, specifically with rocket artillery systems,” he said. “In addition, we are upgrading our T-72 tanks as part of a programme of cooperation with Poland. They are better in their class than the T-90 tanks bought by Azerbaijan.”

Petrosyants said more investment was needed in training Armenia’s armed forces to make the most of the weapons they had.

Yekaterina Poghosyan is a reporter for the Mediamax news agency in Armenia. Shahla Sultanova is a freelance reporter in Baku, Azerbaijan.

Armenia, Azerbaijan, Karabakh
Connect with us