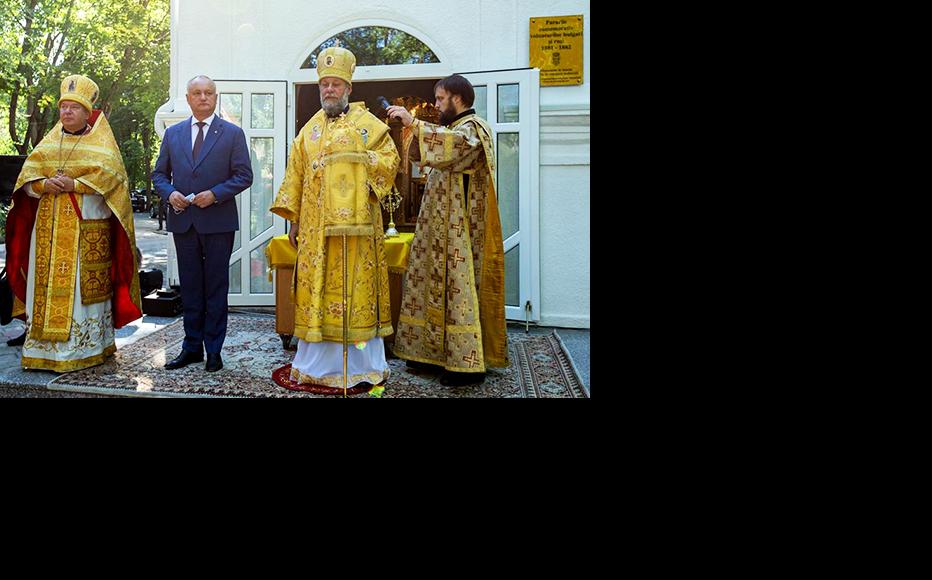 President Dodon met with the head of Moldovan Metropolitan Church, Vladimir on 15 July 2020. (Photo: presedintie.md)
The link has been copied

In May this year, Moldova’s Bishop of Balti and Falesti took to Youtube to warn the public that COVID-19 was a conspiracy spread by occult sources and the 5G network, referencing sinister globalist powers and Microsoft founder Bill Gates.

“Through satellites and antennas they track us where we have been and what places we have visited,” Bishop Marchel said in a video posted on May 18. “The new rules imposed on us by Satanist globalists are poisonous, like a devilish snake.”

The bishop went on to urge Moldovans to reject any prospective COVID-19 vaccines as they would be made by the same “satanist globalists who invented the coronavirus” and would in any case consist of a microchip allowing occult powers to control humanity.

Just weeks later Bishop Marchel, one of the seven bishops of the Moldovan Metropolitan Church, himself fell ill with coronavirus. Nonetheless, he has continued to vociferously support the same conspiracy theories.

In a country where 96 per cent of the population identifies as Orthodox Christian – and which has registered nearly 22,000 coronavirus cases with over 700 deaths – such disinformation can have extremely grave consequences.

Experts warn that the Moldovan Metropolitan Church, already a powerful political player, has fallen in line with the propaganda spread by the Russian state and its religious hierarchy.

Political analyst Ion Tabarta, who works for Chisinau-based NGO IDIS Viitorul, explained how the Church was directly involved in a campaign of disinformation based on Russian narratives.

"Even though we no longer live in the Middle Ages, the approach of many clergy remains so. The Moldovan church remains in line with the Russian one, which continues to refuse modernisation and, in line with Russian political interests, remains extremely conservative,” Tabarta said.

Another political analyst, Mihai Isac, explained that it was common in the former Soviet space for churches to routinely voice Russian propaganda.

“The Kremlin is successfully using religious soft power to promote its own message,” he said. “Similar statements were made at various levels in structures of the Russian Patriarchate in Belarus, Ukraine and other ex-Soviet states.”

The message was being spread through social media, he continued.

"The Russian Patriarchate and the Metropolitan Church of Moldova successfully use the latest technologies to maintain contact with followers and promote their words on Tik-Tok, Facebook, Odnoklasniki, YouTube or Vkontakte networks which have religious content and are administered by the Patriarchate clerics," Isac explained.

In Moldova, as in many ex-Soviet spaces, the church holds great sway over politics. With upcoming presidential elections in November, the pro-Russian president Igor Dodon appears to be looking towards the church to ensure his re-election.

Dodon has also downplayed the pandemic and spoken out against social distancing guidelines. Since the state of emergency was declared on March 17, Dodon has refused to wear a mask in public, repeatedly declaring that COVID-19 was simply just another type of flu.

During Easter, Dodon also assured priests that they would not be fined if they broke the restrictions imposed by the law to prevent the spread of the virus.

“The man who has faith in the soul, this man has a future and also respects his family and ancestral customs. Therefore, let's not forget about the Church, let's come to church, despite the pandemic, despite everything, let's pray and I think we will get over all the problems,” Igor Dodon declared on May 20 on Drochia TV.

Instead, the church was able to express its ire towards Prime Minister Ion Chicu, who continued to press for social distancing measures to be enforced

In an open letter addressed to Chicu on April 28, Metropolitan Vladimir demanded “the tempering of the hostile and contemptuous attitude towards the church, humiliated and kneeling lately”.

Pressure on the government increased after the Church demanded state compensation for the financial loss incurred by the ban on parishioners attending services.

On May 20, Chicu was threatened with “exclusion from the Church's prayers” if he did not relax the restrictions imposed around Easter, preventing the usual mass celebrations from taking place.

In response, Chicu announced, “Let us all pray for the lucidity and health of the people. Including the bureaucrats and employees of the Church. This crisis reminds us of how important it is to restore the education system in the country. In an elevated society, such ‘warnings’ would not be possible.”

Experts have also argued that it is imperative that the Church spend more time on social campaigns to help society amid the crisis rather than on symbolic exercises.

For instance, in April and June, priests of the Metropolitan Church organised symbolic Calvary Roads both across the country to pray for delivery from the coronavirus.

One of them was Bishop Petru of Ungheni and Niasporeni, who flew over Moldova on April 3 in a private jet carrying crosses, icons and prayer books.

Bishop Petru also hosted a recent meeting held in Ungheni city to oppose a draft bill issued by the Health Minister on the mandatory wearing of masks in schools.

This anti-mask narrative is actively promoted by Russian propaganda and conservative circles, which often base their arguments on freedom of expression and human rights.

In mid-June, about 100 pilgrims led by the priest Anatolie Cibric set off on foot to walk the “Road of the Cross” without respecting the measures imposed to stop the virus’ spread.

“Why don't you wear a mask? I'm not a dog to wear a muzzle. I am a man… I don't believe in doctors, I fear only God,” one of the participants in the march declared in an interview for TV 8.

“Instead of organising information and awareness campaigns to promote hygiene measures... the Metropolitan Church of Moldova organizes air and ground tours against COVID-19,” political analyst Victor Gotisan told IWPR, adding that the policy was clearly Russia-led.

Meanwhile, the epidemiological situation has continued to worsen. With the government extending the state of emergency until August 31, Isac said he believed that the propaganda efforts would eventually backfire, adding, “Ultimately, the involvement of the Moldovan Church in this disinformation effort will only prove to discredit the institution in the long-term.”

Coronavirus Pandemic, Giving Voice, Driving Change - from the Borderland to the Steppes, The Infodemic
Moldova, Belarus
Disinformation, Coronavirus
Connect with us