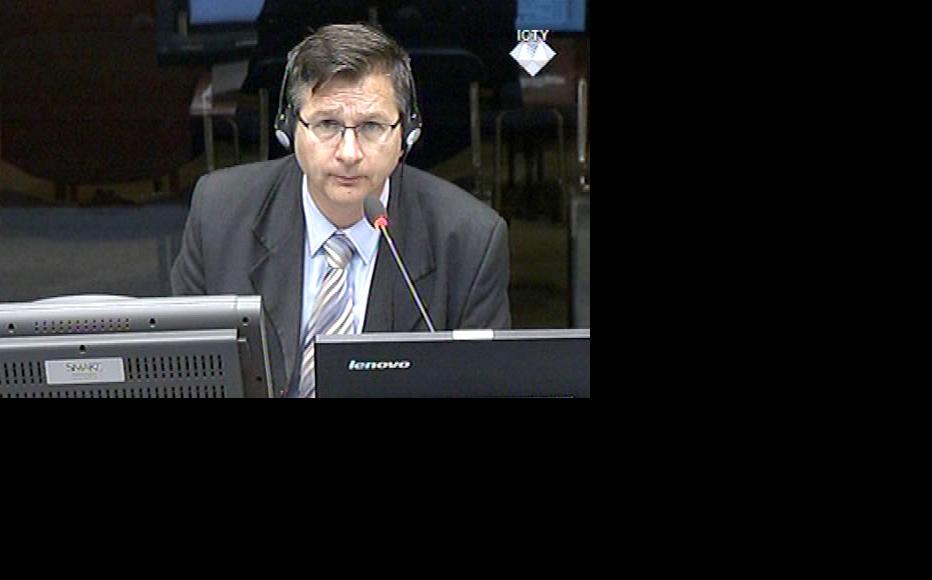 Historian Milos Kovic, defence witness at the Mladic trial. (Photo: ICTY)
The link has been copied

An expert witness in the trial of Ratko Mladic told judges this week that all three parties to the war committed ethnic cleansing and that it was “absurd” to focus solely on Bosnian Serb actions.

Historian Milos Kovic was tasked by the defence with analysing reports written by prosecution experts Robert Donia and Patrick Treanor. Their evidence focused on events in Sarajevo, the activities of the Bosnian Serb parliament and the wartime actions of the leadership.

Kovic’s submission to the court alleged there was “inherent bias” in Donia’s findings and that they relied on “facts taken out of their historical, geopolitical and chronological context, selectivity in supporting literature, use of double standards and omission of crucial information and data”.

He also criticised Treanor’s “one-sided use of sources, factual inaccuracies and non-inclusion of relevant context”. Both authors, he concluded, failed to satisfy “basic academic standards”.

Prosecutor Arthur Traldi put it to Kovic that he himself had been highly partial in his own report.

For instance, in one section Kovic included a quote from General Michael Rose, then commander of UNPROFOR (the United Nations peacekeeping force), about Bosnian government intransigence.

Traldi said that Kovic had chosen not to include Rose’s preceding sentence which had dealt with the behaviour of the Bosnian Serb army (VRS).

“It’s the VRS that was threatening the nascent state of Bosnia’s survival in 1992, right?” he asked.

“You know what? Separatists and secessionists amongst the leadership of the Muslims and Croats… took part in the destruction of the state of Yugoslavia,” Kovic replied. “With their paramilitary units they attacked regular units, that is, the JNA, the regular units of the Federal Republic of Yugoslavia, so they jeopardised the existence of Yugoslavia.”

Traldi went on to probe him further, asking, “Did you mention at any point in either report what happened to the non-Serbs that lived in the territory that the Bosnian government had lost?”

The witness replied that his sole task as an expert witness was “analysing the report of Robert Donia and Patrick Treanor, and there is no reference to that in this report”.

Traldi asked the witness whether he agreed with the statement made in Treanor’s report that the Bosnian Serbs “engaged in ethnic cleansing”.

“No, I contest it,” Kovic replied, adding that “the ethnic cleansing by the other sides is not even mentioned. I called that conclusion absurd and [Treanor’s report] says the VRS was arming its followers in the autumn of 1991, with complete silence covering the prior arming of the HDZ [Croatian Democratic Union] and SDA [Bosnian Party of Democratic Action]”.

“Do you contest that, as he says, the Bosnian Serbs engaged in ethnic cleansing during 1992, yes or no?” asked Traldi again.

Kovic repeated that ethnic cleansing was committed “by all three sides” in the Bosnian war.

Traldi noted that the witness had emphasised the importance of citing a variety of sources in any historical analysis.

“The most authoritative sources to evaluate whether General Mladic intended or planned that ethnic cleansing – those are his own words, right?” he asked.

“You cannot write the history of the events of Bosnia-Herzegovina based on one source, you have to compare it with other sources,” he said. “I should like, Prosecutor sir, if you had given us quotes by [Bosnian presidency member Ejup] Ganic or Abu Hamza al-Masri, the mujahedin who was fighting on the side of the Bosnian Muslims, and then I could answer your questions.”

“I understand that you would rather repeat the names of Muslim figures,” Traldi said. “What would Abu Hamza’s notes tell you about General Mladic’s intent?”

“In history, there is no action that takes place without some cause,” the witness replied. “All history of war is the history of action and reaction between warring parties.”

The prosecutor turned to a wartime interview with Mladic which was published in the Belgrade magazine NIN under the title “I am Just a Soldier”.

Asked about the reason for the conflict, Mladic said in the interview, “We all know who the Turks are. As a matter of fact these Muslims are not even Turks, they are converts, they’ve betrayed the Serb people and repressed them for 500 years. That was the worst scum, the Serb people who changed their religion.”

“This is the sort of statement that would assist a historian in evaluating General Mladic’s intent and purpose, right?” Traldi asked.

“In war that is called war propaganda,” the witness responded. “What was stated in an interview to a publication called NIN is proof of nothing that happened on the ground, our people often say things they don’t mean…words are one thing, actions are another.”

Traldi then read from a report by the Bosnian Serb army’s Sarajevo-Romanija Corps, drafted in 1994 and signed by Luka Dragicevic, then commander of the 2nd Podrinje Brigade.

This document said that Serbs were “genetically better, stronger, more handsome and cleverer. Try to remember how many Muslims there were among the top ten pupils, students or soldiers – only a few. Why? Because they are ‘poturice’ [derogatory term for Muslim converts] and only the weakest of the Serbs became ‘poturice’.”

“Now what we see here is the dissemination of General Mladic’s attitudes, as expressed in that earlier interview, through the organ for morale to troops in the VRS, right?” Traldi said.

The witness once again insisted that this was “only one fragment” of history.

“This is the fragment you’re currently being asked about. Are you able to answer the question?” the prosecutor responded.

“This is only part of the facts about the civil war in Bosnia-Herzegovina,” Kovic said.

Presiding Judge Alphons Orie intervened to remind the witness that he must answer the questions put to him by the prosecution.

“If you consistently insist not to answer the questions, then we have to think about how to deal with your testimony,” Judge Orie said.

After some more debate over the authenticity of the source, and another intervention by Judge Orie, the witness agreed that the quote from the Sarajevo-Romanija Corps report corresponded to what Mladic had said in his NIN interview.

“There is a certain similarity, you don’t need a historian to tell you that,” Kovic replied.

Prosecutors allege that Mladic is responsible for crimes of genocide, persecution, extermination, murder and forcible population transfer which “contributed to achieving the objective of the permanent removal of Bosnian Muslims and Bosnian Croats from Bosnian Serb-claimed territory”. He is accused of the massacre of more than 7,000 men and boys at Srebrenica in July 1995, and of planning and overseeing the siege of Sarajevo that left nearly 12,000 people dead.