Testimony examines a number of incidents in which the line of fire was unclear.

Testimony examines a number of incidents in which the line of fire was unclear. 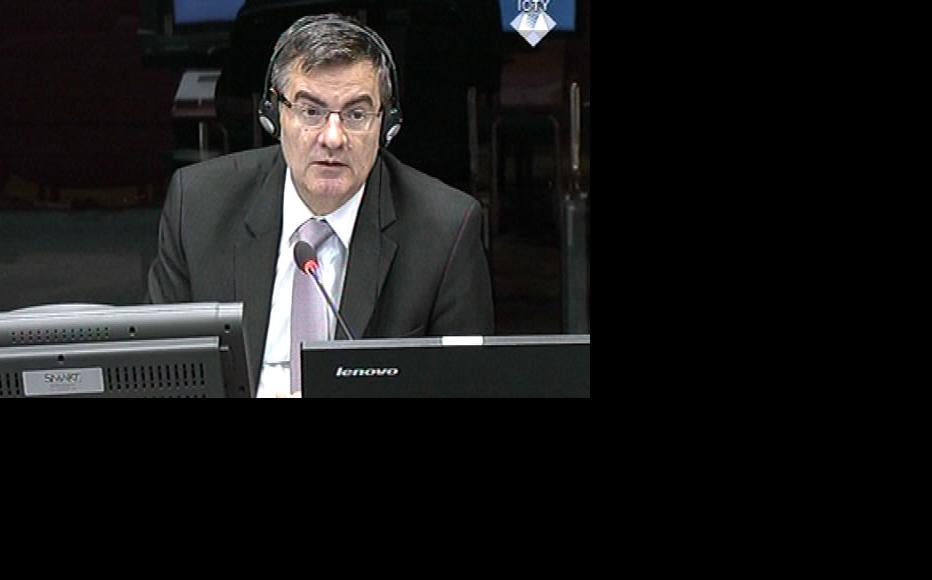 Mile Poparic, defence witness in the trial of Ratko Mladic. (Photo: ICTY)
The link has been copied

A ballistics expert testifying in the defence case of Ratko Mladic has listed a number of wartime sniper attacks in Sarajevo which he said could not have come from the Bosnian Serb side.

The indictment – which lists 11 counts in total – also alleges that Mladic is responsible for crimes of genocide, persecution, extermination, murder and forcible transfer which “contributed to achieving the objective of the permanent removal of Bosnian Muslims and Bosnian Croats from Bosnian Serb-claimed territory”.

Mile Poparic previously testified as a defence witness in the trial of former Bosnian Serb president Radovan Karadzic. In that case, he set out a number of incidents in which he concluded that it had been sniper fire from Bosnian government army positions that killed civilians during the siege of Sarajevo.

He laid out similar arguments in his testimony last week, using video and photographic evidence to support his statements.  Judges at one point asked him to draw them a sketch to illustrate the points he was making.

Defence lawyer Milan Lukic took the witness through a number of incidents in which civilians were shot and killed or injured during the siege.

In one attack in which a woman called Nafa Taric and her daughter Elma were wounded by a sniper in September 1993, Poparic said it would have been impossible for the fire to have come from the Bosnian Serb side.

“The basic conclusion is that the shooter would have had to fire the shot before he could see Nafa Taric,” he said, adding that “according to her statement”, the woman spent only 1.2 seconds out of cover. This would not have been long enough for a bullet to be fired and to reach her from the nearest Bosnian Serb position, he said.

The woman had only taken one step from behind a barricade when she was hit, he said.

“She did not expect any particular danger” as the area had not previously come under sniper fire, he said.

Another example which the witness examined was that of Ramiza Kundo, who was hit on November 2, 1994 as she was going to collect water from a spring near her house. She said she was standing in a doorway when she was shot from the direction of a depot held by the Bosnia Serbs, and hit in the lower part of her left leg.

Poparic said there had been conflicting reports as to both the direction she had been walking in and the position of the spring.

During a visit to the site, he himself had been unable to find a water source at the location indicated by Kundo.

“Further down the street, some 50 metres away I did find a pipe for water with a heavy concrete lid,” he added.

All this meant that he had been “unable to establish where she was hit from”.

“What I could establish with certainty is that positions of the army of Republika Srpska were visible from this place that was shown by Ramiza Kundo. However, on the right-hand side there was territory under the control of the army of Bosnia-Herzegovina,” the witness said.

In another incident, 16-year old Sanela Muratovic was shot in the shoulder on June 26, 1994 as she ran across a road with a friend.

Poparic said “she could only have been injured from a ricochet bullet” rather than shot by someone firing from the nearby Institute for the Blind, as the prosecution contends.

That building was held by Bosnian Serbs, but Poparic said he had examined still photographs taken from a video made of the area, and it would not have been possible for a sniper to have been stationed there.

“One can see that that part of the Institute for the Blind was devastated and no sniper or sharpshooter could have been there; it was too dangerous,” he said, adding that no one had ever presented evidence that there had been a firing position there “even though the place was examined after the Dayton Accords”.

The witness then moved on to the case of Alma Cutina, wounded in the right leg when sniper fire hit three trams on October 8, 1994.

He said his examination showed the fire could not have come from Bosnian Serb soldiers in the high-rise Metalka building nearby.

All three attacks on the trams, Poparic said, involved “someone shooting from the executive council building”, which was under the control of the Bosnian [government] army”.

At the start of her cross-examination, prosecutor Carolyn Edgerton said that there were serious flaws in Poparic’s methodology.

Looking at the incident in which Kundo was wounded, Edgerton said Poparic had made a mistake in identifying the site where the woman had been hit, placing it as far as 130 metres further along the road.

“The effect of plotting the incident location 130 metres down the road from where the witness we saw in the video yesterday said it actually happened gives a potentially wider field of fire that you could argue includes Bosnian-held territory, doesn’t it?” she asked. “That’s the effect of this 130-metre shift.”

“That is partially true,” the witness conceded.

Edgerton pointed out that she raised the same issue with him when he testified in the Karadzic case. She quoted Poparic’s testimony from that case, when he had told her that he “agreed that the area you marked is perhaps wider than the one marked by” the previous investigator.

“I allow for the fact that the boundaries might be wider,” the witness said.

The cross-examination continues this week.