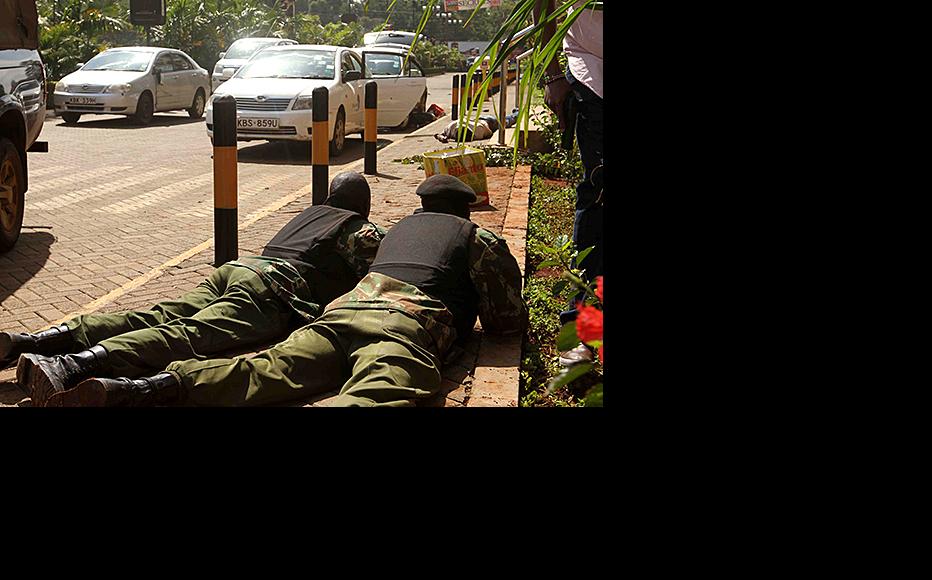 Soldiers positioned outside the Westgate mall in Nairobi, September 2013. (Photo courtesy of Capital FM)
The link has been copied

Rachel used to run a beauty salon in Nairobi’s Westgate shopping centre. A year ago, as she tried to escape from the carnage unleashed by Somali Islamist militants, she was hit by a grenade. She lost her right foot and still has shrapnel embedded in the other. Now on crutches, Rachel does not know whether she will be able to walk again and needs round-the-clock care from her family.

“Sometimes… I feel like running, but I remember my two feet were hurt. So I tell God to give me grace, but it is not easy,” she told IWPR. “Sitting in the house for long [periods] with pain here and there makes me feel more traumatised, but I know one day I will stand on my feet.”

A year on from the Westgate mall attack, Rachel is still coming to terms with her injuries.

“You don’t know what the doctors are going to tell you,” she said. “And then the nightmare of staying in the hospital for long – that is not what you had prepared for your life. It becomes more and more hard.”

According to the Kenyan government, 67 people died and more than 200 others were injured when al-Shabab militants stormed the four-storey shopping mall on September 21, 2013. The attackers took numerous hostages and retained control of the building for almost five days.

A bungled response by the security services meant police officers were shot by the military as they tried to take over the rescue operation.

On the first anniversary of the Westgate attack, analysts are questioning the nature of efforts made since then to upgrade the security agencies and combat the threat of al-Shabab.

Over the last 12 months, the Islamist group has carried out further attacks in Nairobi as well as in coastal parts of Kenya. In June, it carried out a raid in the town of Mpeketoni in the Lamu on the northeastern coast, killing more than 60 people.

Al-Shabab claims these attacks are retaliation for the Kenyan military’s ongoing intervention in southern Somalia, where it has been fighting the militants since 2011. The attacks are also a response to what the group sees as the Kenyan state’s mistreatment of Muslims, particularly in the coastal region where the killing of a number of clerics have gone unexplained. (For more on this, see Kenyan Police Challenged Over Shootings.)

The response from government leads some commentators to argue that it is not taking the threat seriously enough, and that improvements to the security system have fallen short of what is needed.

In April, the Kenyan security forces responded to a spate of attacks in the Nairobi suburb of Eastleigh by launching Operation Usalama Watch in this largely Somali-inhabited part of town. More than 4,000 suspected illegal immigrants and refugees, the bulk of them Somalis, were rounded up and held at a nearby stadium. (Kenyan Security Forces Accused of Stoking Tensions.)

A subsequent report on the operation from the Independent Police Oversight Authority found that police were responsible for widespread misconduct, including several instances where officers took bribes in exchange for releasing detainees.

Following the al-Shabab attack on Mpeketoni in June, President Uhuru Kenyatta denied that the group had been involved and instead blamed “local political networks”. Al-Shabab had already claimed responsibility, and Kenyatta’s remarks were widely interpreted as an attempt to shift the blame onto the domestic political opposition.

Nic Cheeseman, director of the African Studies Centre at Oxford University, said Kenyans were worried that the government appeared more concerned about making political capital out of the al-Shabab threat than tackling the problem head on.

“For a lot of people, that [Kenyatta’s response to Mpeketoni] has completely distorted the debate away from where it should be – which is capacity, ability to respond, quality of information on the ground – to a sort of political game,” Cheeseman said. “Do they [the authorities], behind the scenes, know that it is al-Shabab and they are working on that? Or are they investing more of their money in dealing with the domestic opposition than they are with al-Shabab?”

SHORTCOMINGS STILL TO BE ADDRESSED

Experts say that if the government is serious about reforming its security services and responding to the threat of al-Shabab, there are several areas it needs to focus on.

The parliamentary inquiry into the Westgate attack identified shortcomings across the police, the military, the intelligence services and various government departments. Among its findings the report referred to a “general laxity and unresponsiveness among the police” in response to terror alerts in Nairobi, as well as widespread indiscipline, particularly within the Kenya Defence Forces.

Closed circuit television footage shot inside the mall during the siege showed soldiers looting shops while they were supposed to be taking control of the building.

Some commentators say the response to subsequent attacks is proof that little has changed in the last 12 months.

Mustafa Ali, a security expert and director of the Arigatou International NGO in Nairobi, pointed to the police’s sluggish response to the Mpeketoni attack, and said the government lacked “a framework or a strategy for counter-radicalisation”.

“There hasn’t been much that has been done [in the last year] to address the lapses in the police force itself,” Ali said. “The police force is still the old lethargic force; it is incapable of professionally apprehending terrorists or preventing major attacks.”

Others take a more sympathetic view, arguing that criticism of the police response to the Westgate attack could be misplaced given the early stage at which the military took over the operation. Similarly, claims that intelligence on Westgate or subsequent attacks was ignored or not acted on quickly enough are very difficult to verify.

Cheeseman pointed out that many of the failings in the police force and other security services come down to an ingrained lack of professionalism. Changing this would require patient work that could not happen overnight, he said.

“That goes back to the training you give them, the amount you pay them, the cultural ethos within the organisation, the leadership from the top,” Cheeseman said. “You can’t deal with that easily and quickly. That is a kind of lifetime generational shift to really work on.”

Wider questions remain about what exactly is being done to tackle the threat posed by al-Shabab and prevent a repetition of the Westgate attack.

IWPR approached both the head of Kenya’s police force, Inspector General David Kimaiyo, and the interior minister, Joseph Ole Lenku, for comment on improvements made over the last year, but they declined to be interviewed.

However, in an interview with Kenya’s Citizen TV in May this year, Lenku said the government was “doing more than enough” to keep Kenyans secure.

“There is a very clear and very elaborate long-term strategy on security by government,” he said.

In Nairobi, and especially around the city’s many Western-style shopping centres, there is little sign of an increased security presence. Most premises rely on private security companies whose staff are badly paid and poorly- trained.

“The security forces will get there by the time a bunch of hostages have been taken and the attack has started,” Cheeseman said. “They won’t get there to prevent it most of the time.”

He added that more investment and training were needed if security personnel were to become capable of detecting and preventing attacks. He said advice should be sought internationally from forces like London’s Metropolitan Police, which was forced to learn the lessons of a series of linked terror attacks in July 2005.

But particularly where the police were concerned, Cheeseman questioned whether there was the political will to take such steps.

Again, experts believe Nairobi’s response to the attack in Mpeketoni highlights what is missing.

Communities such as those in Lamu harbour a deep-rooted mistrust of the Kenyan government, particularly over land they feel belongs to them but has been given to others, and the sense that they will be excluded from economic development plans.

In a recent policy paper for the Norwegian Peacebuilding Resource Centre, David Anderson, professor of African history at the University of Warwick, argued that these factors, coupled with the perception that Muslims were being victimised, made communities like this “soft targets” for recruitment by al-Shabab.

Turning a blind eye to these dynamics and alienating Muslim citizens with operations like Usalama Watch means that “the state is simply playing into al-Shabab’s hands”, he said.

When Kenyatta blamed the Lamu attacks on local politics, Anderson said, he was missing the point.

“Local politics was involved not to the exclusion of al-Shabab, but quite simply because al-Shabab is learning how to turn Kenya’s toxic politics to its own very dangerous and violent disadvantage,” Anderson wrote. “Al-Shabab recognises how effectively they can exploit local politics by harnessing it to their own cause.”