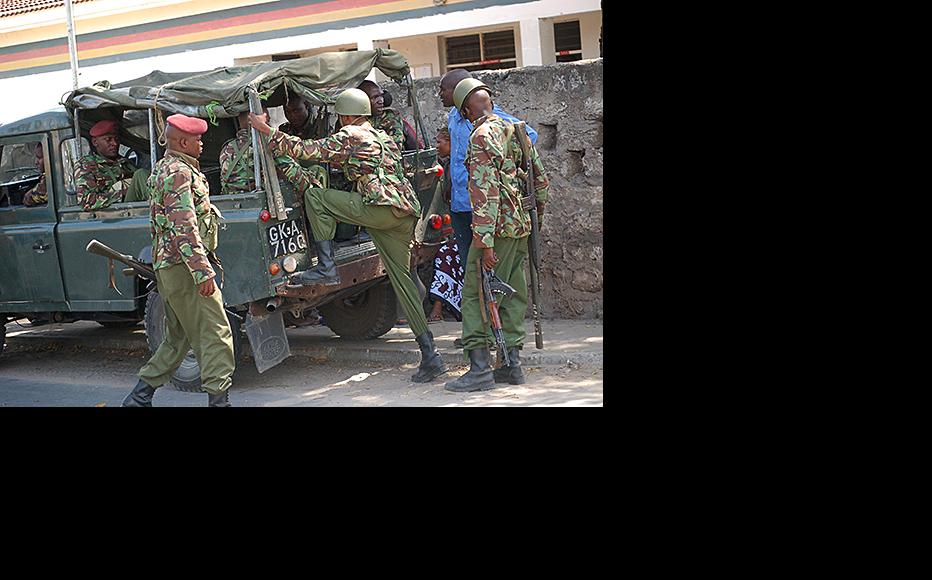 Officers depart on an operation from outside a Mombasa police station. (Photo: Joseph Akwiri)
The link has been copied

Outside his home on the outskirts of Mombasa, 29-year-old Swaleh Rama holds up a dry, bloodstained bedsheet.

He has vowed to keep it as evidence of what he says was the illegal shooting of his elder brother, Salim Mohammed Nyiro, by counter-terrorist officers from the Kenyan police force.

Nyiro was shot dead by officers on the morning of June 17 at his home in Mombasa, Kenya’s second largest city.

Police say that he was a member of the Islamist group al-Shabab, and that they were forced to shoot to kill after he opened fire on them at his home as they tried to arrest him.

Later that same day, police shot a second man, Kassim Omollo, who they say was a central figure in recruiting and radicalising Kenyans. They say he was involved in taking young men to Somalia where they were trained to fight for al-Shabab.

After shooting Nyiro, police found Omollo’s number stored in his mobile phone. They used this number and information from Nyiro’s wife to trace Omollo.

Police say Omollo was a senior member of al-Shabab and had been operating in both Kenya and Somalia. They had been looking for him and Nyiro for several months, suspecting them of planning attacks in Nairobi and Mombasa.

Following the two incidents, police reported that they had recovered an assortment of weapons – including grenades, automatic rifles and ammunition – from the residences of both men, as well as booklets about al-Shabab and training manuals written in Arabic..

According to the counter-terrorism force, the two men defied orders to surrender and shot at officers, prompting them to retaliate.

But friends and relatives of the two men dispute that version of events.

Nyiro’s brother Swaleh Rama insisted that he surrendered to the police and pleaded with them to spare his life.

“Salim [Nyiro] did not fire back at anyone. He did not even have any weapon,” Swaleh told IWPR. “The weapons that the police said were recovered from him were only planted by them. My brother was innocent, but they killed him.”

“He was a calm person, and did not deserve the kind of death he died. Police can be so brutal,” she said.

According to Swaleh, who was informed of the incident by Nyiro’s wife, police did not go directly to Nyiro’s home on June 17 but instead stopped a small public bus on which he was travelling. They arrested him on the bus and then took him to his house to search it.

“When they found nothing, instead of letting him free, they shot and killed him at close range. He had been very cooperative,” Swaleh said.

But police say they went directly to Nyiro’s home, where he resisted arrest and fired at officers.

FEARS OF SPREAD OF AL-SHABAB

In October 2011, Kenyan army units were deployed to Somalia to tackle al-Shabab militants operating in the south of the country. Since then, Kenya has suffered a number of attacks, mainly in Nairobi and Mombasa and along the north-eastern border with Somalia. According to the New York-based advocacy group, Human Rights Watch, at least 76 people have been killed and hundreds more injured in these attacks.

The attacks are thought to be in retaliation for Kenyan involvement in Somalia, although al-Shabab has only claimed responsibility in a few cases.

The deaths of the two men in Mombasa have sparked an outcry among rights groups who say the police have committed a number of extrajudicial killings and targeted the Muslim community.

Phylis Mwema, the executive director of the Kenya Community Support Centre, a non-government organisation that seeks to prevent the radicalisation of young Kenyans and the spread of extremist groups, has criticised the police for killing the two suspects and wasting a crucial opportunity to investigate a potential terrorism offence.

“Killing these suspects denies them and us the opportunity to interrogate the suspects and even get useful information to use in curbing terrorism,” Mwema said.

The police have strongly denied accusations of excessive force.

“We are not crazy,” Thomas Sangut, a senior police officer who oversaw both operations by the counter-terrorism police, said. “We cannot just get hold of someone and kill them when our role is to protect life. That would be a gross violation of human rights. Those complaining did not tell you that one of our officers was equally injured during the shootout and might have been killed had it not been for his bullet-proof jacket.”

“If they [the suspects] had managed to stage an attack and killed innocent citizens, the very people complaining would be accusing us of laxity, and saying our intelligence system is asleep,” Sangut added.

In August last year, Sheikh Aboud Rogo, a popular Muslim cleric who was on the international terrorism watchlist, was shot dead by unknown gunmen in broad daylight on a busy Mombasa highway.

The killing sparked days of angry and violent protests among his followers, who claimed the police were behind the incident.

Earlier in 2012, two other Muslim activists in Mombasa who had been linked to al-Shabab disappeared following reports that they had been arrested by police.

The body of one of them was later found in a national game reserve 180 kilometres from Mombasa.

Human Rights Watch has documented a number of abuses committed by the Kenyan police and has criticised them for failing to adequately investigate these cases.

A report released in May described how police were seen abusing Nairobi residents the day after seven people were killed in an explosion onboard a local bus.

Although it has not investigated the latest killings in Mombasa, Human Rights Watch has condemned what it described as the propensity of the Kenyan police to shoot first and ask questions later.

“The police need to stick to the law even when pursuing terrorism cases,” Otsieno Namwaya, a researcher for the organisation in Nairobi said. Human Rights Watch has previously called on the police to investigate cases of alleged extrajudicial killings and “disappearances” in Coast province.

“We fear that this has not been the case so far,” Namwaya said.

He described police investigations into such cases as “unsatisfactory”, saying there had been “near unwillingness by police” to establish the truth behind reported extrajudicial killings.

“The reluctance to investigate has heightened initial suspicion that indeed police are responsible for extrajudicial killings,” he added.

The Kenya National Commission on Human Rights has received complaints about the killings of Nyiro and Omollo, and says it is investigating them. The case has also been referred to the Independent Police Oversight Authority.

"In our investigations, we are seeking to establish whether the slain individuals were indeed terrorists, and even if they were, whether police were justified to shoot and kill them, because there might have
been a wasted opportunity to arrest and charge them in a court of law,” Mohamed Ruwange, legal officer for the human rights commission in Mombasa, said.

Other rights groups fear that more suspects are in danger of suffering arbitrary mistreatment at the hands of the police.

“We know there are more people, alleged to be terrorists, who the police are still looking for,” said Hussein Khalid, executive director of the Muslims for Human Rights group in Mombasa. “The courts have not found them guilty of any crime. It does not justify this kind of treatment on any Kenyan.”

The Kenyan police deny they have a policy of shooting suspects on sight.

“We are following the law,” Aggrey Adoli, police chief for the Coast region, told IWPR. “We have people we are monitoring, but that does not mean we want to kill them. It is normal investigations and gathering of intelligence, but one thing for sure is that you cannot arrest someone who is shooting at you.”

Joseph Akwiri is a freelance reporter in Mombasa.