The planned cascade of plants seems doomed as investment collapses.

The planned cascade of plants seems doomed as investment collapses. 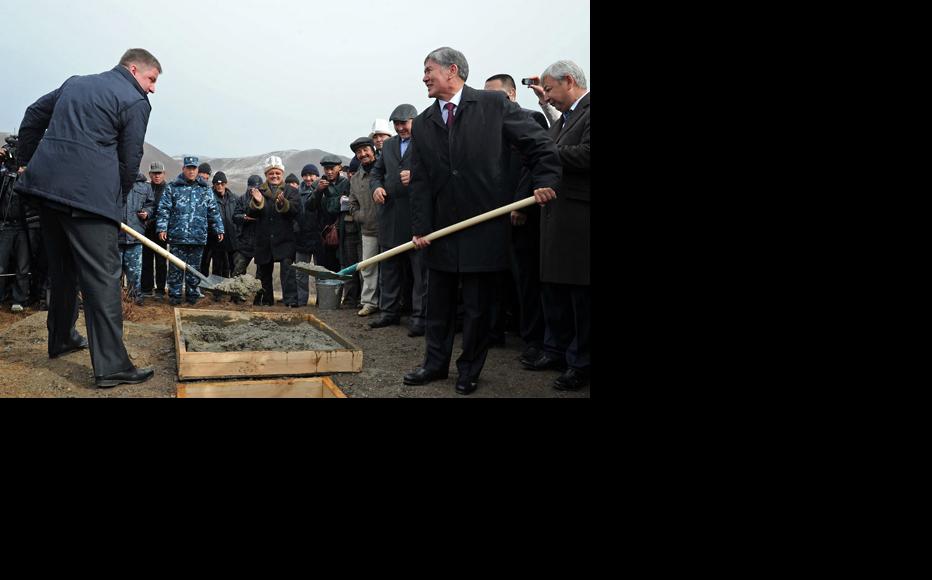 Kyrgyz president Almazbek Atambaev (r) and Evgeny Dod (l), former head of RusGidro, at the launch of the Higher Naryn project in 2013. (Photo: Press service of the President of Kyrgyz Republic) 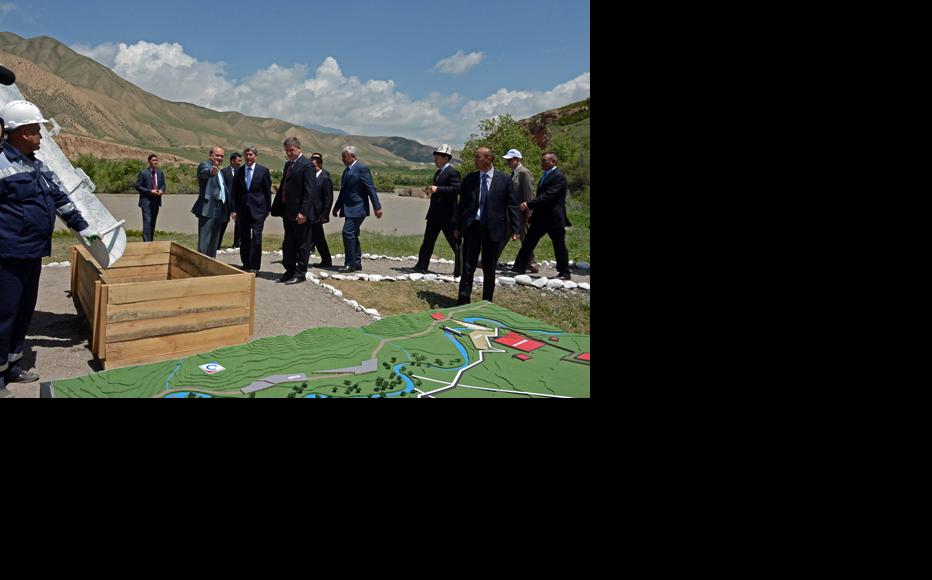 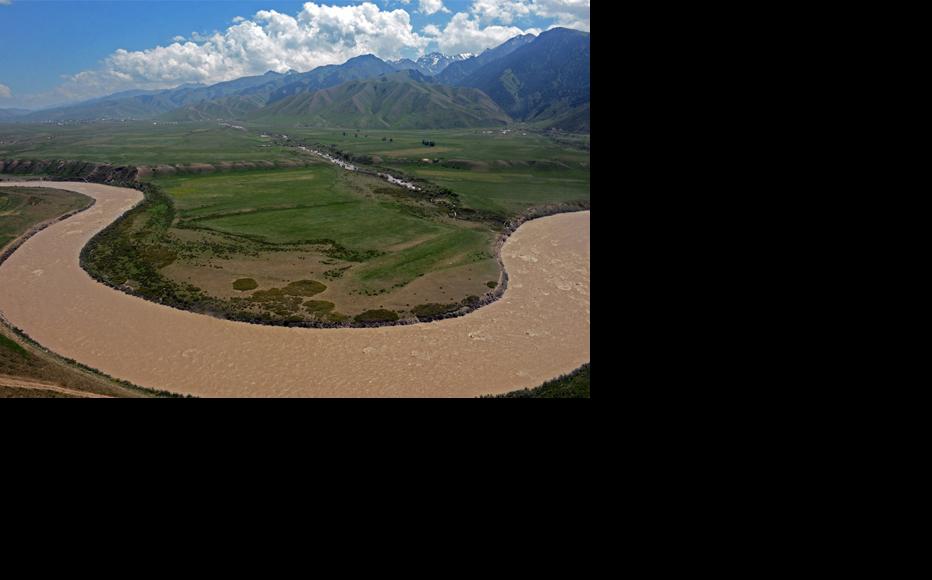 Naryn is one of the largest rivers in Central Asia. (Photo: Press-service of the President of Kyrgyz Republic) 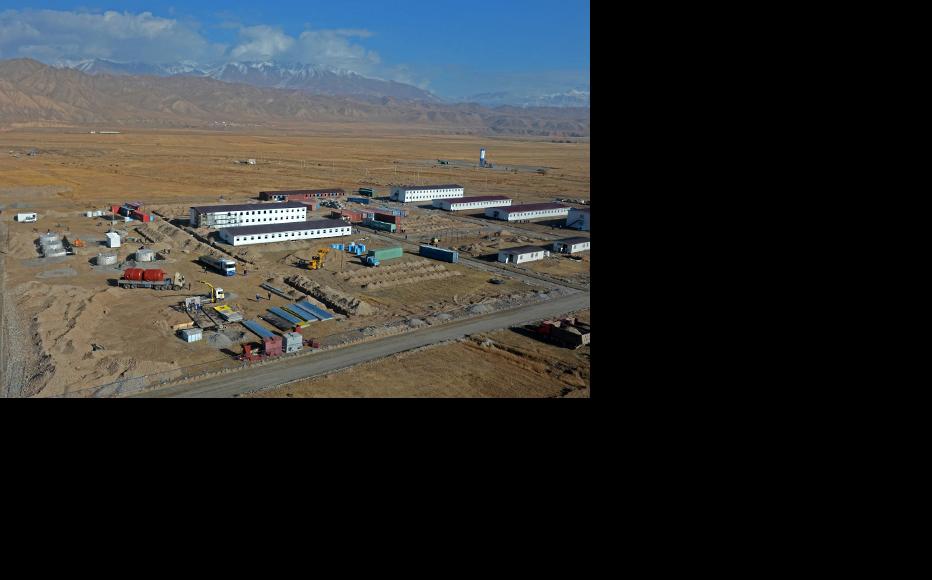 Construction has now been put on hold. (Photo: Press-service of the President of Kyrgyz Republic)
The link has been copied

The future of Kyrgyzstan’s largest hydropower project remains in doubt, with the government searching for new investors after a deal with Russia finally collapsed.

The planned Upper Naryn cascade and the Kambarata-1 plant at the Naryn river had been seen as not only a means by which the country could reach energy self-sufficiency but also become an exporter.

(See also The Cost of Privatising Power in Kyrgyzstan).

An agreement was signed with Russian monopoly RusHydro in April 2013, but began to falter two years later when RusHydro suggested costs be splits due to its own financial difficulties.

Energy independence is a key political concern in Kyrgyzstan. Although the country controls a third of Central Asia’s water reserves it cannot meet its own electricity needs.

Instead, Kyrgyzstan imports electricity from neighbouring Kazakstan and Tajikistan.

The Kyrgyz-Russian joint-stock company Verkhnenarynsky kaskad GES was created within the framework of the 2013 agreement to build and operate the hydropower plants.

The Russian side was expected to take care of all financial issues, while it would be the Kyrgyz responsibility to allot plots of land.

The first Upper Naryn unit was expected to be operational in 2016, with further hydropower stations Naryn HPP-1, 2 and 3, as well as the Akbulun plant, supposed to be in use by the end of 2019.

By the time the project collapsed, Russia claimed it had already invested some 37 million dollars in the joint venture.

While Kyrgyzstan has committed to paying this money back, it claims that the funds were misspent.

The Kyrgyz State Audit Chamber launched an enquiry into Verkhnenarynsky kaskad GES and its contractors.

At the beginning of August, Bishkek announced that it would return the Russian funds as soon as this audit was complete, according to the Kyrgyz RFE/RL Azattyk service.

Kyrgyz lawmaker Almambet Shykmamatov visited the site in 2016, and said it was clear that the Russians had exaggerated the work that had been done.

“Even with the naked eye one can see …that this amount [of 37 million dollars] could not have been spent,” he told IWPR. “We saw [it] when we came there with journalists.

“There are facilities that [according to the project] have been funded but they don’t actually exist. For example, a water drainage system... No one could see it there. There was just a natural river; nothing artificial about it. It raises the question: where is the money? Everything is complicated there.”

Verkhnenarynsky kaskad GES board member Chorobay Akunov acknowledged that the preparatory work had been more explenseive than expected due to the rising dollar.

But he denied any allegations of graft.

“RusHydro developed a feasibility study, the cost of work was agreed,” he told IWPR. “Our estimates were verified by the Naryn regional state examination. Tenders were announced for all operations.

“What do you mean by overpricing?” he asked. “If we speak about legislators visiting the site, what kind of earthworks could one see in winter?”

RusHydro has more than 70 renewable energy sector projects in Russia, but the Upper Naryn project would have been its first foreign investment.

Kyrgyzstan is searching for a new investor willing to re-launch construction and cover the full costs of the project.

In return, the state is offering joint management and a share of the revenue from future projects.

The total cost of the Upper Naryn project is estimated at 727 million dollars, with a payback period of over 12 years.

Kyrgyz media had suggested that negotiations regarding water energy might take place during an official visit by German chancellor Angela Merkel to Bishkek in July.

But the topic was never raised during the Atambaev-Merkel meeting.

However, it has stayed silent on the subject of investing in water energy projects.

Hydro engineer Ivan Naitko told IWPR it would be a challenge to find an investor since groundwork was still needed.

“Worldwide hydropower facilities are based on infrastructure. Almost always they are built with the state support because [such projects] make it possible to develop the whole area,” Naitko said.

“In turn, it allows other investors to be attracted to a number of spheres [such as transport and infrastructure]. As far as the Upper Naryn hydro power plant chain is concerned, no one will invest in it because there is no electricity and no roads there. Moreover, hydropower industry requires long-term [government guarantees] as it always does,” Naitko added.

Uzbekistan strongly opposes any hydro power plants upstream of the Syr Darya river in Kyrgyzstan due to possible reduction of the water flow, which may harm Uzbek agriculture.

Its government has repeatedly called for an independent international study into any such projects.

Despite Atambaev’s insistence that investment needed to be sought immediately, lawmaker Shykmamatov said that any movement was unlikely for at least another year.

“I think that new investor is unlikely to appear before presidential elections [scheduled for autumn of 2017] because all these issues are strongly linked to geopolitics,” he said.

Mariya Zozulya is a Bishkek-based journalist.

Kyrgyzstan
Water
Connect with us