Kyrgyzstan: A Taste of Secularism in Religious Schools

Kyrgyzstan: A Taste of Secularism in Religious Schools 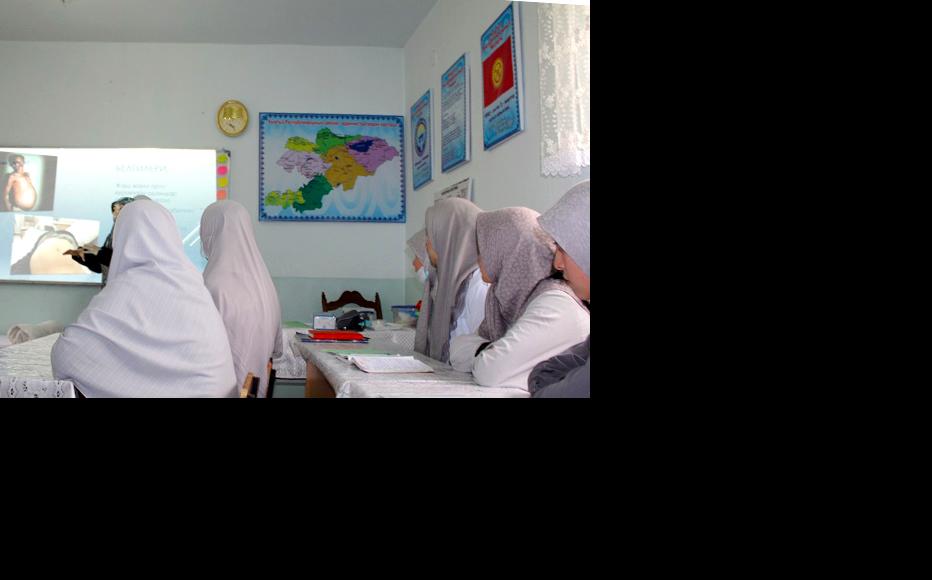 A madrasa in Kyrgyzstan. (Photo: muftiyat.kg)
The link has been copied

Kyrgyzstan is planning to introduce laws regulating studies at the country’s religious schools, or madrassahs, as part of ongoing efforts to increase state control over the religious sphere.

Although Kyrgyzstan remains a secular republic, the majority of the population is Muslim and interest in religion has grown rapidly over the last two decades. There are also concerns over radicalisation, with at least 600 Kyrgyz nationals known to have travelled to fight in Syria and Iraq.

According to the State Commission for Religious Affairs of the Kyrgyz Republic (GKDR), the country currently has 102 registered madrasahs and nine religious higher education institutions.

As of February 2017, there were about 6,000 pupils studying at madrasahs, although numbers are likely to be higher as not all of the religious schools are officially registered.

This lack of regulation is potentially problematic, both when it comes to the conditions the children study in and also due to fears over the spread of extremism.

A study carried out by the Bulan Institute, an NGO, looked at how unregistered institutions operated.

The new GKDR regulations will also make it compulsory for all secondary religious institutions, regardless of the religious affiliation, to introduce topics such as such society, the history of religion and Kyrgyz literature into their curricula.

“It specifies who is going to teach, what conditions should be met by a curriculum, conditions in the classroom, the uniform, whether the institution meets technical requirements and who is going to control the situation,” said GKDR head of analysis Gulnaz Isaeva. “Also, those students who want to obtain brief information about religion can take short-term expedited courses.”

She added, “We don’t want the students of religious schools to become outsiders in the social life of the country. Therefore, such subjects as History, Man and Society have been included.”

In addition, ten subjects will be mandatory at higher educational institutions, including the Kyrgyz and Russian languages, geography, sociology, world history and IT.

Osmonaliev supports the new legislation and said it should be strictly enforced.

“We can see the real size of the problem: no one controls this sphere,” he continued. “A lot of religious schools have been opened, either Islamic or Christian or sectarian. Anyone who feels like it has opened schools. No one controls them, no one cares what they teach there.”

Indira Aslanova, a religious studies scholar, said that this new document had gone farther than previous drafts and took into account the principles of the secular state.

“Moreover, the state does not interfere with the educational content, it only checks they don’t call for extremism and stipulates that the curriculum must contain secular disciplines,” she continued. “It’s very important, because some studies held in Kyrgyzstan have shown that the students of madrasahs are interested in having a broader curriculum as it would help them better integrate into the community. One of the studies found that they thought the president of the country was a mufti.”

Akimzhan Ergeshov, the head of the muftiate’s educational department, noted that madrasahs admit students after the end of the 9th grade, when they have already received some basic education.

“Some madrasahs teach some occupations in addition to religious education. For example, girls study sewing and boys study welding, plumbing, etc. However, not all madrasahs do the same. Moreover, some madrasahs invite teachers to teach secular subjects such as mathematics, Kyrgyz language, physics, chemistry,” Ergeshov said.

According to him, there also madrasah students who study simultaneously in secular schools to receive a certificate upon completion.

Nonetheless, despite the introduction of these ten secular subjects into the curriculum, madrasahs will not authorised to issue certificates of secondary education. For that, according to ministry of education regulations, they need to include 16 secular courses.

The authorities have made clear they would not subsidise these extra requirements.

“Many people mistakenly believe that if the state itself offers to introduce secular disciplines, it must pay them. But we have to take into account that all religious schools are private and they themselves must seek the money to pay salaries to teachers,” Isaeva said.

As to the nine religious higher education institutions currnelty operational in Kyrgyzstan, only the Kyrgyz Islamic University has been partially licensed by the ministry of education.

“The graduates of this university can apply to public posts,” Ergeshov said. “They have license from the ministry of education to teach three disciplines: the Arabic language and philology, theology and introduction to religion.”

Historian and educational expert Muratbek Imankulov said that the new curriculum would be a good investment into students’ futures and suggested that the state could provide extra incentives too.

“We suggest that the muftiate should give an opportunity to madrasah graduates to enter universities or continue studying along with the graduates of secondary schools,” he continued. “We emphasise that religious schools should prioritise the interests and prospects of children so that they can find a rightful place in the society, find a job and keep a family.”

Kyrgyzstan
Education
Connect with us