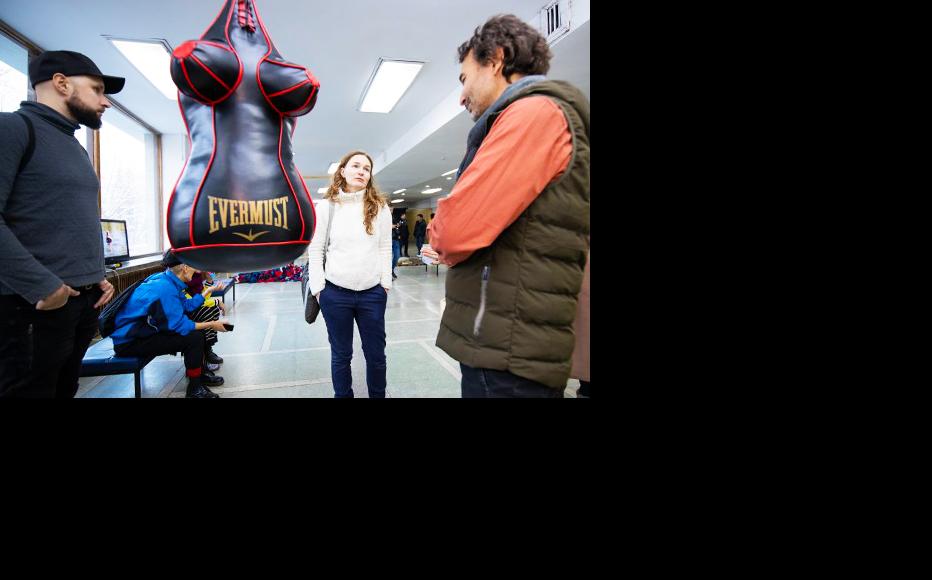 A punch bag as the symbol of domestic violence was removed from the exhibition. The committee found it provocative. (Photo courtesy of the Feminnale organisers) 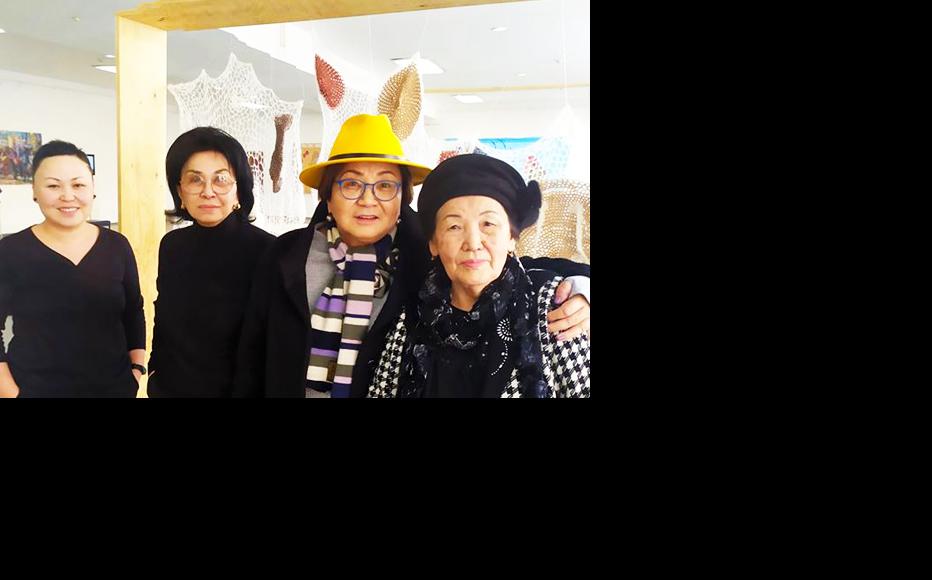 A groundbreaking exhibition in Bishkek dedicated to contemporary art and feminism has been forced to tone down its content after anger from conservative activists.

Titled Foster Mothers. Economic Freedom. Women, the so-called feminnale – a title intended to unite the idea of the art biennale with feminism – opened on November 27 at the Museum of Fine Arts.

Organisers had announced it would run for 17 days in memory of the number of young women who died in fire at a Moscow printing house in 2016. Out of the dead, 14 women were from Kyrgyzstan.

However, just five days after it opened, a group of activists gathered in front of the ministry of culture, information and tourism demanding it be closed down as it offended local cultural sensitivities.

“They come to our museum and force what is contrary to our mindset and traditions on us,” said one of the 15 protestors, Ilimbek Israilov, outside the museum. “It’s not our tradition to do such things.”

The protestors were granted a meeting with the minister, Azamat Dzhamankulov, and told him they were particularly offended by an installation made of lingerie that was dedicated to woman’s right to abortion, and a live performance piece in which a naked woman crossed a hall before getting dressed.

Altyn Kapalova, the exhibition’s art supervisor, said that these were legitimate expressions ofthe rights, freedoms and equal opportunities of women.

“This performance was supposed to make the audience think that a woman’s body is not a subject of a bargain or anyone else’s property. Even a female sex worker has a right to do what she wishes to do with her own body,” Kapalova said.

After the meeting, museum director Mira Dzhangaracheva said she was resigning at the request of the minister of culture.

The exhibition has continued, but with all content that had any images of allusion to the naked bodies removed, including one exhibit of a punching bag in the shape of a woman’s body.

“The exhibition will last once its purposes are good,” Dzhamankulov later told the vesti.kg website. “However, we should take into account our mindset and the fact that some pieces of art are provocative. We won’t tolerate another performance [of the naked woman dressing]. You can consider it censorship.”

Former Kyrgyz president Roza Otunbaeva defended the exhibition in a message posted on Facebook and shared by other media.

“This is the women’s exhibition of the problems they have, suffer from, die for, fight against, fail yet never give up! This is a heart cry, their call for the society to stop violence, change hoary obsolete views, a call for justice, lawful vengeance,” the message read.

A central theme of the exhibition was women’s lack of economic freedom, exploring how Kyrgyz women not only support their extended family but also often act as the breadwinner, including travelling abroad to work.

According to the State Migration Service of Kyrgyzstan, about 45 per cent of external migrant workers are women. The International Migration Organisation (IOM) has documented how these women are often stigmatised, subjected to violence and suffer family separation and broken social bonds.

Within Kyrgyzstan, women earn less than men, according to the National Statistical Committee, with figures showing that in 2018 women earned 71.1 per cent of men’s salary.

But Sumsarbek Mamyraly, a Bishkek-based entrepreneur and feminist activist, said that vulnerable groups such as women or LGBTI people were easy scapegoats for public frustration.

The wider public had more pressing interests than protecting artistic freedom, he continued, adding, “The main reason for such a reaction to art shown at the feminnale is poverty. The hungry can never perceive high ideas or stand for the rights of the vulnerable.”

Mamyraly stressed that those protesting about supposed immorality in art should not be judged too harshly.

“We should not hate them,” he continued. “We won’t reach any consensus if we condemn or suppress them in public. I stand for consistency. First, we should improve our economy, feed the hungry, and warm those in need. Only then people satisfied with their life can think about art and protection of those who are weaker.”

Director and artist Gennady Bazarov agreed that public awareness of the importance of arts and culture was low, including among the political elite.

“They don’t attend museums, exhibitions, theatres, film premieres,” he continued. “They are concerned only with their career and personal welfare. Our intellectual potential is very fragile and vulnerable. It should be protected, favoured and supported.”

Giving Voice, Driving Change - from the Borderland to the Steppes
Kyrgyzstan
Culture, Women's rights
Connect with us