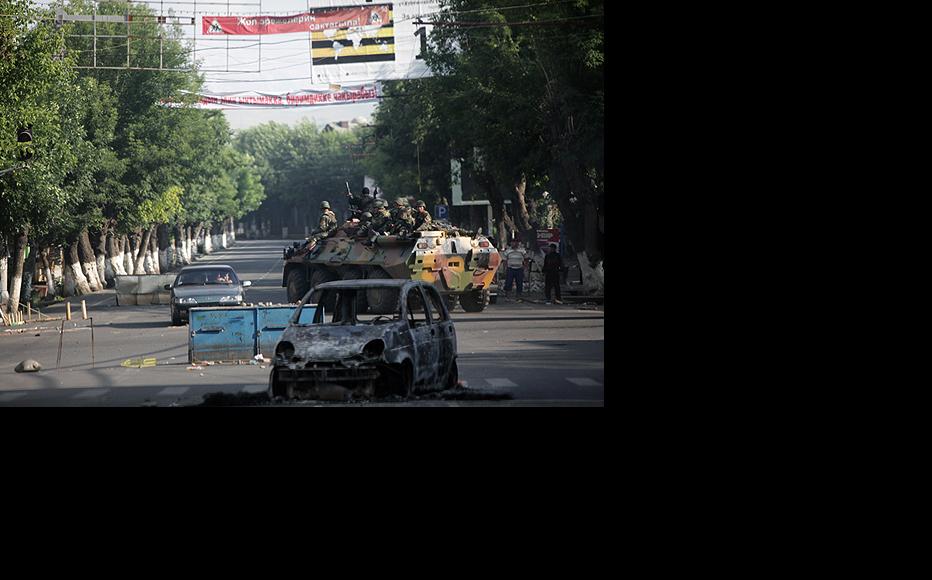 Kyrgyz security forces drive past a burnt-out car blocking a road in Osh. (Photo: Inga Sikorskaya)
The link has been copied

A fresh clash near Osh in southern Kyrgyzstan has raised tensions that have been slowly easing as people began putting their lives back together after the worst bloodshed in two decades.

A police unit met stiff resistence on June 21 when it was sent in to disarm residents of the ethnic Uzbek village of Nariman, two kilometres outside Osh.

The government’s press office said eight people were taken to hospital, and one of them later died. Human rights activists in the region believe four people died.

The official statement said police were acting on intelligence when they raided the village, and opened fire only when armed men put up a fight.

Seven arrests were made and two hand grenades, three Molotov cocktails and dozens of Kalashnikov rounds were seized in the raid.

Government spokesman Timur Sharshenaliev told IWPR the police action was prompted by a double murder in the village early on in ethnic clashes that first began in Osh overnight on June 10-11. The district police chief and his driver went to Nariman on June 13 to try to persuade residents to calm down, but were killed by angry locals.

As of June 22, the Kyrgyz health ministry said 251 people had died and about 2,200 required medical treatment in ethnic fighting in Osh and Jalalabad regions.

The official death toll remains much lower than the 2,000 cited by some international media outlets; this higher figure may have come from a comment which Kyrgyzstan’s interim leader Roza Otunbaeva made in an interview for the Russian newspaper Kommersant, to the effect that the real figure might be “ten times higher” than the official count, which at that point was around 190.

In Osh itself, there were signs of life slowly getting back to normal. Shops, markets and banks were beginning to reopen, there were more cars on the streets, and public transport resumed on some routes, except in the city centre where makeshift barricades were still being cleared away.

Kursan Asanov, deputy chief of police in Osh province, said gunfire was petering out. “Several districts of Osh [region] remain hot-spots, but even in those areas no shots are being heard.”

Food shortages have led to rocketing prices, but humanitarian aid is now coming into the city on a regular basis, even if there is still not enough to go round.

Like other parts of Kyrgyzstan, Osh is preparing for a June 27 nationwide referendum in which voters will be asked to approve a new, more democratic constitution, and also to confirm Otunbaeva as interim president until an election can be held at the end of 2011.

Otunbaeva is currently visiting areas affected by the violence.

In the city, volunteer groups are being set up to accompany police on patrol.

A member of one of these groups, Hikmatullo, who served in the 1980s Soviet war in , said the idea was that veterans like him would lead squads of younger men. Their role would be to support the police, mediate between them and the local population, and generally keep an eye on them to prevent them, for example, planting drugs on suspects.

Meanwhile, some refugees are beginning to return to their homes. The United Nations refugee agency UNHCR estimates that 400,000 people were displaced from their home by violence, intimidation and arson attacks. (See Desperate Refugees Wait on Kyrgyz-Uzbek Border.)

The head of Kyrgyzstan’s border guards, Cholponbek Turusbekov, said 4,419 people had returned from camps over the border in Uzbekistan since the beginning of this week, bringing the total who had come back to their own country to about 35,000. Turusbekov predicted that the estimated 40,000 refugees still in Uzbekistan would return by the end of this week.

An Uzbek from Osh who gave his first name as Zainabiddin told IWPR that his daughter, who fled to Uzbekistan with her children and mother-in-law during the violence, was not planning to come back yet.

“The Uzbek authorities have made speeches explaining that anyone who wishes to leave can return home to Kyrgyzstan, but that if they don’t wish to go, they can remain in Uzbekistan,” said Zainabiddin, adding that his daughter was among the latter.

The confrontation in Nariman highlighted one of the dilemmas facing the Kyrgyz authorities – when force is necessary to restore law and order, and when such actions risk fuelling tensions unnecessarily.

The heads of two leading rights groups, Tolekan Ismailova of Citizens Against Corruption and Aziza Abdirasulova of Kylym Shamy, issued a warning to the interim government that heavy-handed tactics could impede reconciliation attempts.

“During this so-called disarmament operation [in Nariman] a young man… died of a bullet wound, two others were beaten up and died the next day and a fourth died of a heart attack,” Abdirasulova said. “What the law-enforcement bodies did is contrary to Kyrgyz legislation.”

Security officials in Osh rejected allegations that the police action was excessive, and said Nariman residents were warned of the raid a day in advance. They also deny suggestions that more than one person died.

Leonid Bondarets, an expert on security matters, told IWPR that resolute policing was necessary, but when such measures were taken, they must be demonstrably even-handed, and must be communicated clearly to the public.

Sahira Nazarova, a member of the Advocacy Centre for Human Rights Defenders and is currently part of a mobile team monitoring the distribution of humanitarian aid, also believes the police have to take action to disarm the armed men who caused the violence. In addition, she says, local residents must clear roadblocks when they are instructed to do so, as they were before the police moved into Nariman.

Nazarova said these measures would help restore law and order and get humanitarian aid through.