Case highlights wider concerns about an executive that seems to be trying to mould the constitutional court into a weak, pliable institution.

Case highlights wider concerns about an executive that seems to be trying to mould the constitutional court into a weak, pliable institution. 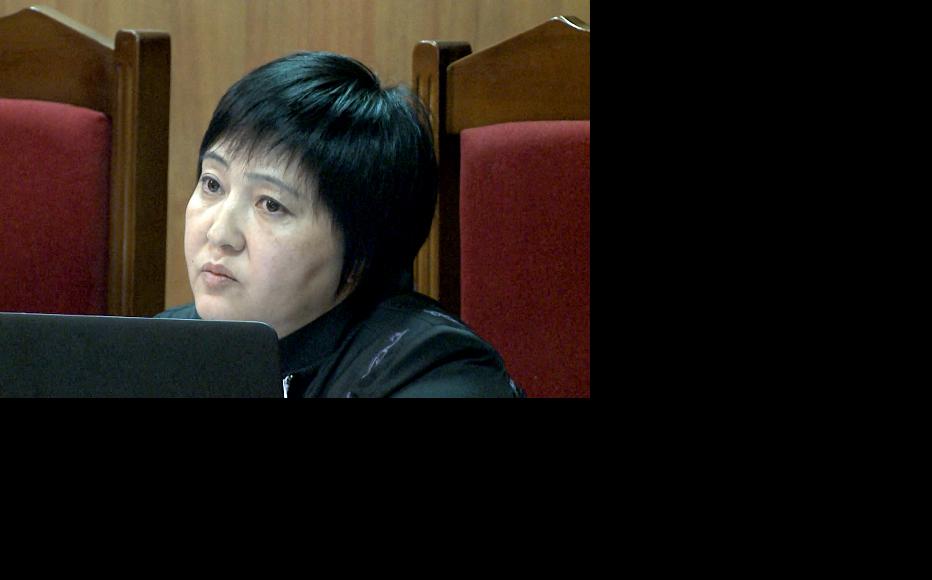 Judge Klara Sooronkulova at the Constitutional Chamber meeting where she was taken off the biometric law case. May 27, 2015. (Photo: Timur Toktonaliev) 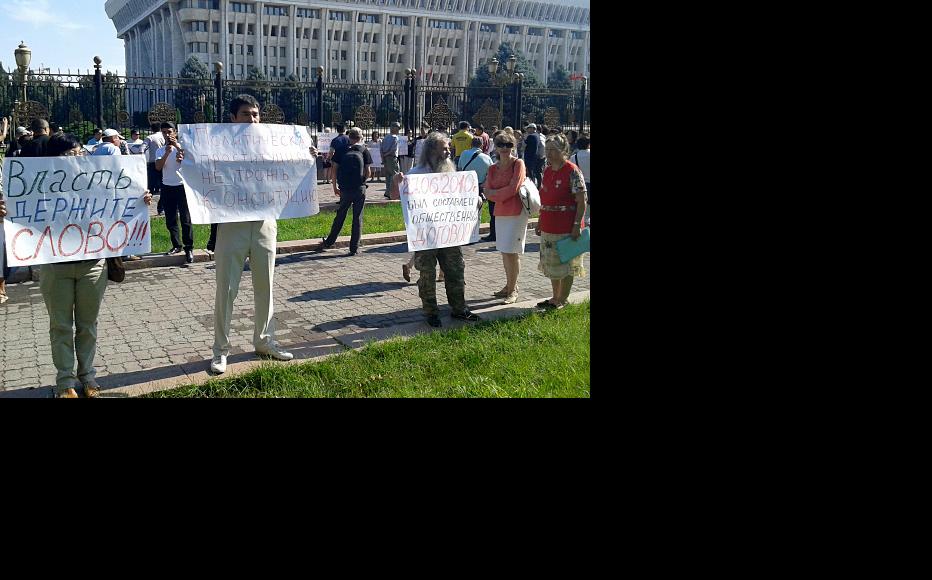 Protest in support of Sooronkulova and against weakening the judiciary. June 26, 2015. (Photo: Timur Toktonaliev)
The link has been copied

The ousting of a Supreme Court judge in Kyrgyzstan has raised difficult questions about the independence of the judiciary, just when the government is planning changes that could erode its powers. A second judge has now been reprimanded for supporting his beleaguered colleague.

She claims that the judges who voted against her were subject to undue influence from the office of President Almazbek Atambaev, which was afraid she was going to rule a government-sponsored law unconstitutional.

Sooronkulova had been appointed lead judge in an examination of whether legislation on biometric data collection passed last year was constitutional. After civil activists filed a case with the Constitutional Chamber in November 2014, Sooronkulova spent six months looking at the law, during which time she sought international legal advice.

The law sets out a process for nationwide biometric data registration, which is voluntary – except that voters must do so in order to vote in the parliamentary election due this autumn.

Before Sooronkula could announce her ruling on the case, a lawyer acting for parliament’s legal affairs committee, Svetlana Boljurova, presented the Constitutional Chamber with allegations against her. She said Sooronkulova had revealed her views – that the biometric law was unconstitutional – ahead of announcing them publicly, in breach of procedure.

Boldurova also claimed that because Toktayim Umetalieva, a leading human rights defender involved in the case filed with the Constitutional Chamber, comes from the same part of Kyrgyzstan as Sooronkulova, this was liable to bias her judgement.

In the Constitutional Chamber vote, the eight other judges were split 50-50. But chairman Mukanbet Kasymaliev had the casting vote, so the decision was to take Sooronkulova off the case.

At Boljurova’s instigation, the Judicial Council then reviewed an allegation that Sooronkulova had shown “insubordination” for criticising Kasymaliev and other judges who voted against her. The council ordered Sooronkulova to step down before her term in office expired. The decision has to be approved by President Atambaev before it takes effect.

The decision seems to have been pushed through hastily. By law, disciplinary procedures against sitting judges require a two-month investigation in which evidence is gathered and witnesses questioned. In this instance, the decision took six working days from when Boldjurova filed her complaint. Sooronkulova was not interviewed, and Judicial Council chairman Jakyp Abdyrahmanov refused to examine what she said was documentary evidence demonstrating how the president’s office put pressure on the judiciary to act against her.

Cholpon Jakupova, who heads the Adilet legal aid clinic, said Sooronkulova should have been given the right to produce evidence to defend herself, since she was within her rights to speak publicly after the Constitutional Chamber took her off the case, and she was also in a position to present evidence pointing to undue influence on judges.

“We human rights activists who were present during the litigation on the biometric registration law volunteered to be witnesses. But… Abdyrahmanov, said the council would interview whomsoever it thought fit,” Jakupova told IWPR.

Abdyrahmanov told IWPR that Sooronkulova was in the wrong for speaking out against her colleagues.

“This was an internal matter for the Constitutional Chamber, and she should not have let it go beyond the chamber. If there were any issues, they should have been addressed within the body,” he said.

Sooronkulova says that a representative of Atambaev’s office was present in the room throughout the Judicial Council proceedings.

“This was an open, brazen show of power,” she told IWPR.

CONSTITUTIONAL COURT A BUFFER AGAINST TOTALITARIANISM

Jakupova believes the president’s office wants to subdue the Constitutional Chamber before proceeding to dismantle it.

Draft amendments to the constitution agreed in May will give the president new powers to appoint the head and deputy head of the Supreme Court. At the moment, judges elect their own chairman. In another change, the Constitutional Chamber will be separated off from the Supreme Court, which is likely to remove its ability to make binding decisions and relegate it to an advisory role. (See Constitutional Tinkering in Kyrgyzstan .)

The Civic Council for Monitoring the Judicial System, an advocacy group, has written to Atambaev and parliament warning that the move will turn the Constitutional Chamber into “the president’s legal department”.

Jakupova warns that “legislators will be able to pass illegal laws and decrees proposed by the president”.

“If an independent Constitutional Chamber is abolished, the country will simply be taken to pieces and devastated, and no one will be able to prevent it,” she added.

Under the current set-up, constitutional judges have made several rulings against the government. In one such case, they decided that only the prosecution service could bring criminal cases and file charges. This was a challenge to the president, who had granted Kyrgyzstan’s intelligence service to do this.

Sooronkulova says the government feels threatened by the judiciary.

“Judges who are not compliant pose a threat to the government. Given its status, the Constitutional Chamber is generally a threat to a totalitarian state. It can annul orders, laws and presidential decrees.”

Assuming the amendments are approved by parliament and the president, the changes will go to a nationwide referendum.

Biometric data collection, underpinned by last year’s law, is a central plank of government policy. Officials say that just over 2.5 million people – most adults and hence most voters – had entered their fingerprints into the system as of May 30.

Although it is not compulsory to submit biometric data, it will be required in order to vote from now on.

Officials say the system will guarantee free and fair elections.

“People have sought voting rights for hundreds and thousands of years,” Atambaev told a conference on parliamentary democracy on June 11. “Yet today, some people don’t even bother to go and give their fingerprints. They shouldn’t be part of the election.”

Critics of the scheme say that is exactly the point – people are being blackmailed into providing their fingerprints, with the threat that they will lose the basic right to vote if they do not do so. Dinara Oshurakhunova, head of the Coalition for Democracy and Civil Society, says that any election in which the right to vote is constrained in this way will be illegitimate.

Others note concerns about how secure the data will be, following the loss of a number of USB drives containing citizens’ personal details.

Sooronkulova plans to appeal against the Judicial Council’s decision. She has some public support – on June 24, civil society activists held a demonstration near the president’s office and parliament to express support for her and opposition to both the biometrics law and the proposed changes to the constitution.

But the judge says she has few illusions about the outcome of the process.

“I’m going to try to appeal, but I realise what the result will be,” she said. “What is the Judicial Council? It is as rotten, subordinate, rubber-stamping and controllable as the rest of the judicial system.”

On June 26, a judge who expressed support for Sooronkulova received a reprimand from the Judicial Council. Emil Oskonbaev was one of the four who opposed taking her off the biometric law case when the Constitutional Chamber voted last month. At the time, Oskonbaev tried to step down from the chamber in protest, but his request was refused on the grounds that a quorum of judges was needed.

Anna Yalovkina is an IWPR contributor in Bishkek.

Kyrgyzstan
Rule of Law
Connect with us