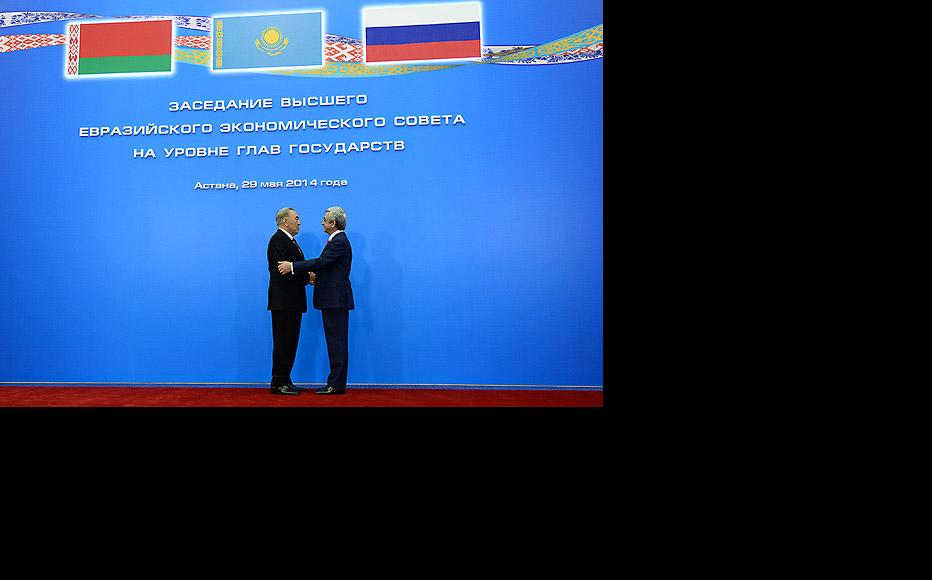 Armenian president Serzh Sargsyan (right) with his Kazak counterpart Nursultan Nazarbaev at the Astana summit, May 29, 2014. (Photo: Armenian president&#039;s website)
The link has been copied

After months of delay, Kyrgyz president Almazbek Atambayev agreed a final road map at a Customs Union summit in the Kazak capital Astana on May 29, which also saw the bloc’s three members – Russia, Belarus and Kazakstan – formalise the creation of a more comprehensive Eurasian Economic Union that should come into being from next January.

The road map document had been held up because of a Kyrgyz bid for concessionary terms to ease the transition.

The Russian leadership was no doubt motivated to take action to accelerate Kyrgyz accession by its worsening relations with the West, prompting a new east-facing policy direction. As well as pushing ahead with the Eurasian Economic Union, Russia signed a deal on May 21 to supply natural gas to China via a new pipeline in eastern Siberia.

The Russian shift made it easier for the Kyrgyz government to shore up domestic support for Customs Union membership by ensuring that national interests would be protected. Kyrgyz officials had argued that their economy was in poorer shape than those of the existing bloc members. Membership will bring an end to the low trade tariffs Kyrgyzstan currently enjoys with eastern neighbour China, as a fellow-member the World Trade Organisation. The trade in cheap Chinese goods, re-exported to the wider region, is a major income source for many Kyrgyz families.

Kyrgyz economy minister Temir Sariev says the country needs 377 million US dollars to implement the road map, which includes an action plan to change legislation to comply with Customs Union regulations, harmonise rules on the movement of goods and vehicles, train customs officers and strengthen borders controls. Russia has agreed to contribute 200 million dollars of this, and Kazakstan will cover the rest.

Russia and Kyrgyzstan also signed an agreement to set up a Development Fund worth one billion dollars, which will be managed jointly and will work to ease Customs Union integration.

Adding Kyrgyzstan to the Customs Union and later the Eurasian Economic Union benefits Russia, too, which wants to forge a major global trade bloc that could one day rival the European Union. Speeding up the process became an imperative because of Moscow’s deteriorating relations with the West. Kyrgyzstan offers the added bonus of a strategic location close to China as well as Uzbekistan and Tajikistan. In practical terms, the Customs Union will gain a border with Tajikistan, which has indicated that it too might like to join the bloc.

An expanded bloc will give Russia a stronger position in Central Asia, which is increasingly falling under China’s economic influence. And it will – with Tajikistan as a future member – enable Moscow to play a greater role in protecting Central Asia’s borders with Afghanistan and combat drug trafficking.

Finally, it would give Russia more scope for dealing with Uzbekistan, the most populous country in the region, which has to date opted out of Moscow-led economic and security groupings, and has sometimes uneasy relations with its neighbours. Russia will be more able to address long-running disputes over hydroelectric dam projects in Kyrgyzstan and Tajikistan, Uzbekistan objects to these because it fears they will starve it of irrigation water. On the one hand, Moscow will be in a good position to mediate a solution; on the other, it may find that having a measure of control over the sources of Uzbekistan’s water is useful leverage.

In the circumstances, offering the Kyrgyz a financial incentive seems a price worth paying for Moscow.

The decision on membership now needs to be approved by Kyrgyzstan parliament. At the Astana summit, President Atambaev said his government would do its best to implement the road map, and expressed hope that Kyrgyzstan would also join the Eurasian Economic Union in January 2015. Warning that the transition would not be easy, he insisted that Customs Union membership was an “absolute necessity”.

Ahead of the meeting, Atambaev also made it clear there was little alternative. “Either we join now with good conditions that are beneficial to us, or else we’ll have to join sooner or later, having missed the moment to do so on favourable terms,” he said on a visit to China on May 17-21.

Atambaev’s talk of “necessity” most likely refers to the negative consequences of remaining outside the bloc, especially since Kazakstan, a major trading partner, has introduced new import tariffs. In addition to the gradual increase in barriers to re-exports of Chinese goods, Kyrgyz traders have been hard hit by currency devaluation in Russia last autumn and Kazakstan earlier this year, and many came close to bankruptcy. That explains why this important merchant class switched from strong opposition to the Customs Union to broad support for accession.

Kyrgyzstan’s parliament is likely to wait until after the summer recess before debating the road map package, as it would be well-nigh impossible for the government to finalise the documentation.

Legislators are widely expected to back Customs Union membership. In a straw poll of Kyrgyz parliamentarians after the Astana summit, there was unanimous backing for entry, even from opposition Ata Jurt members.

Some of them did caution that when the government tried to sell the deal to the public, it should refrain from painting too rosy a picture, for example by promising agricultural and textile producers access to a market of 170 million people. They said ministers should focus instead on helping Kyrgyz businesses comply with new trading requirements, since competing with Russian and Belarussian producers was going to be tough.