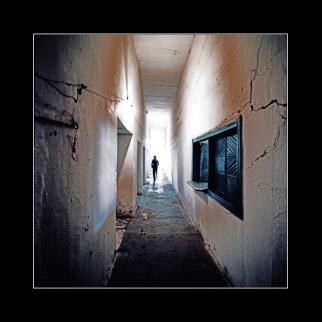 A Month in Prison in Kyrgyzstan © Eric Gourlan

A Month in Prison in Kyrgyzstan 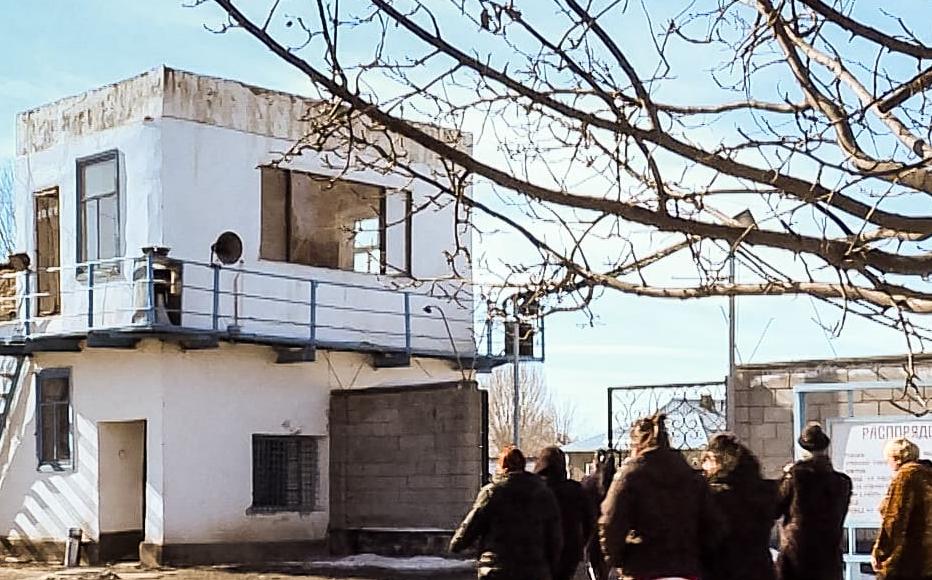 Convicts going for a walk at Kyrgyzstan's only women's prison at Stepnoe. © IWPR 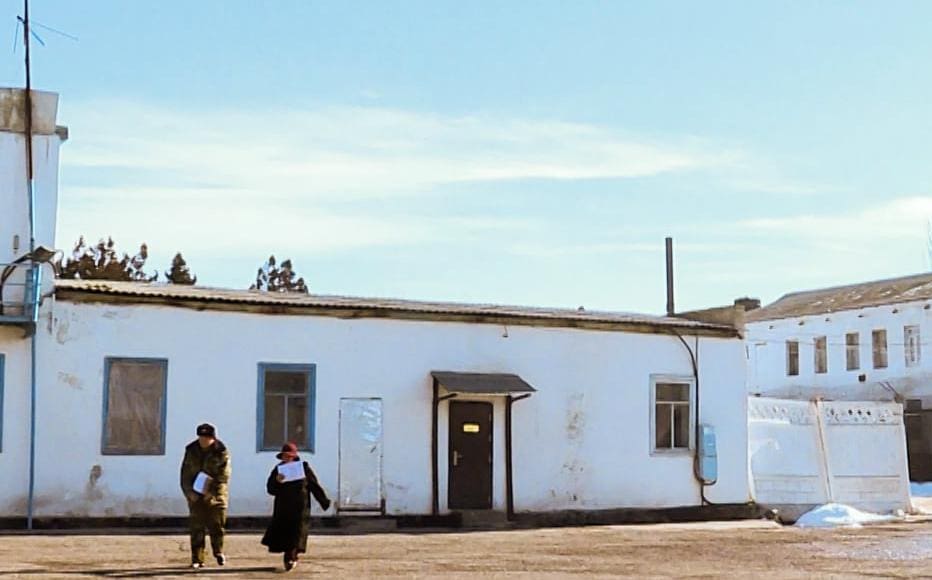 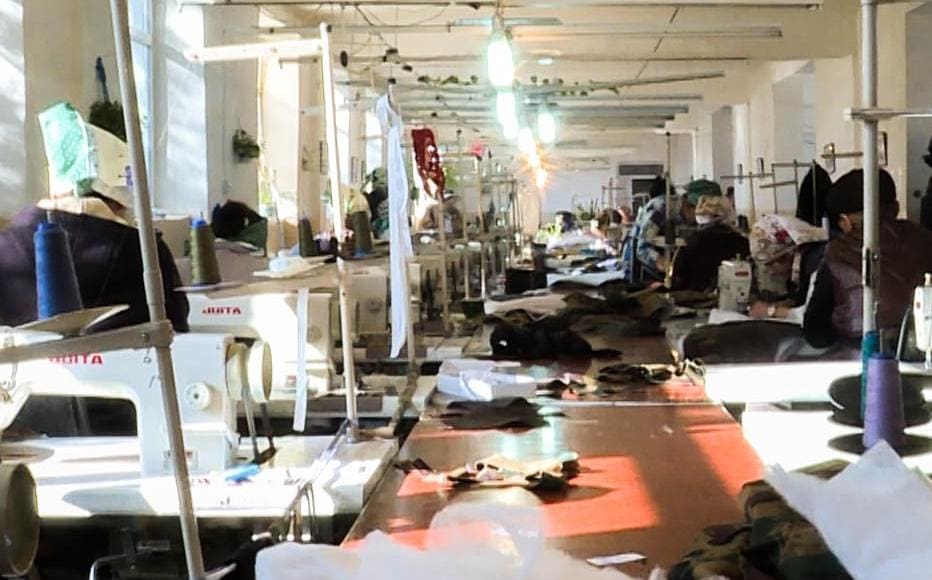 One can do menial tasks while in prison, such as sewing, baking, making army boots and producing soybean milk. © IWPR 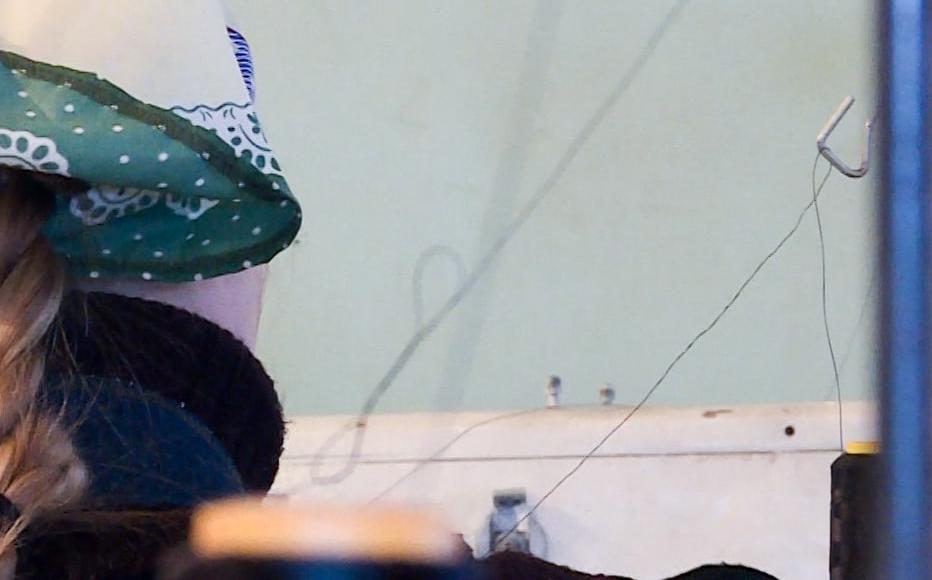 At a prison workshop. © IWPR 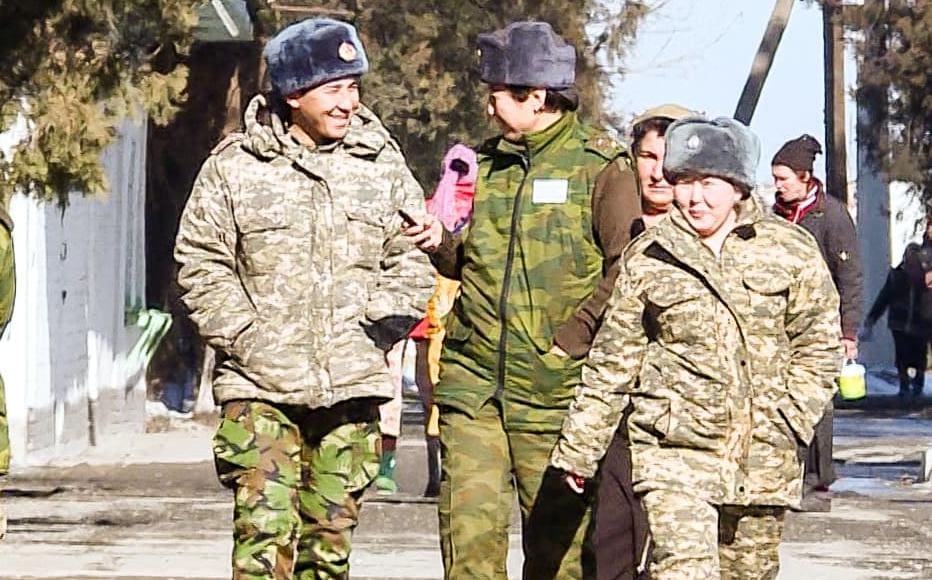 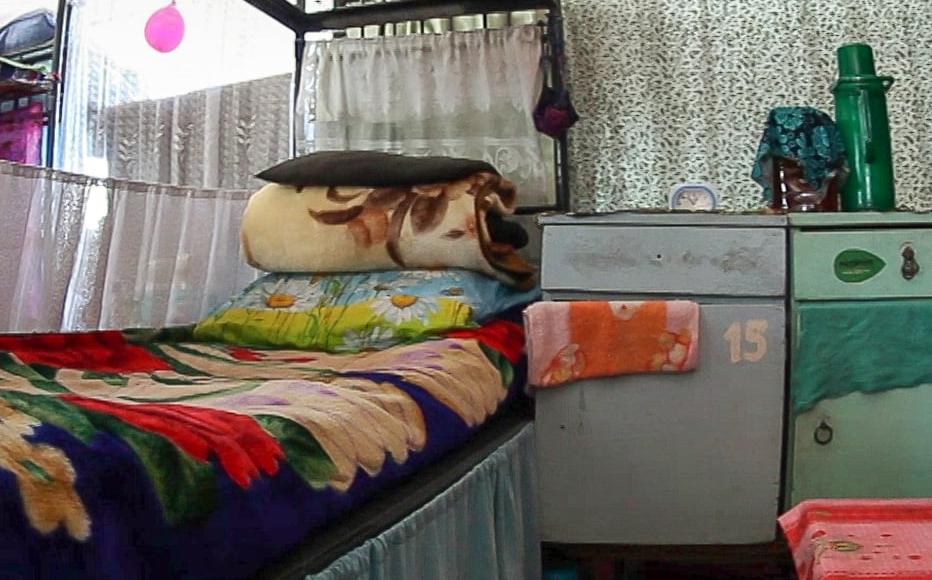 Compared to male prisons, the facility for female convicts is well maintained. © IWPR 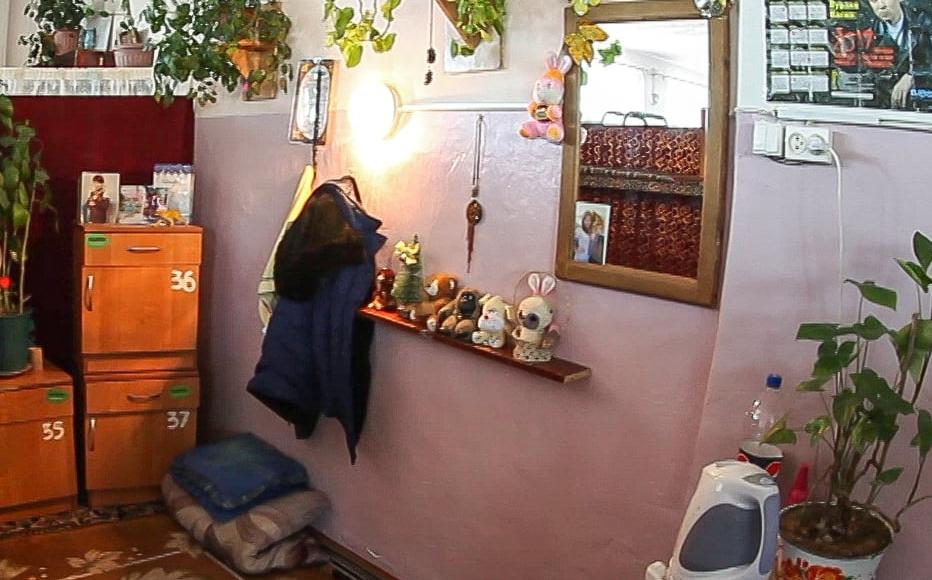 One can see photos of relatives and loved ones at each living space. © IWPR 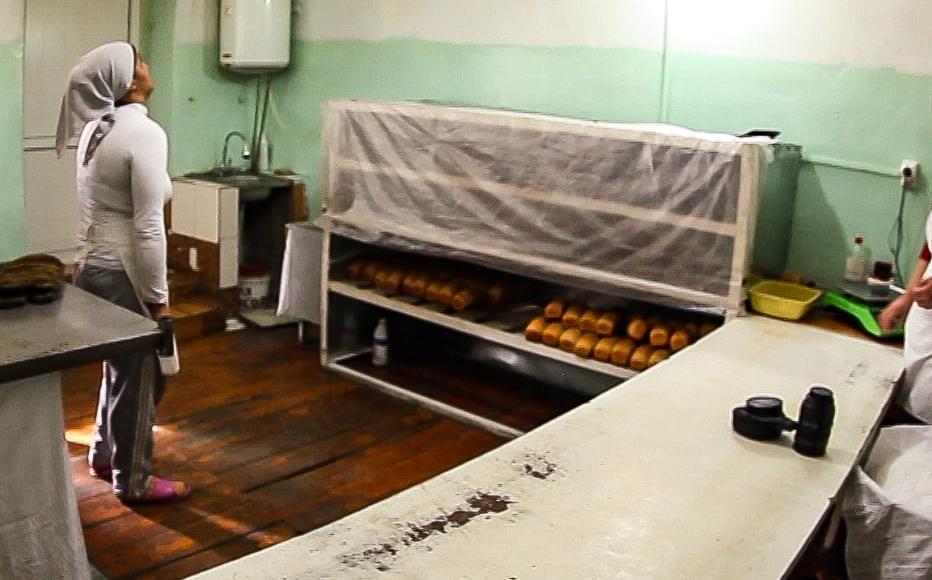 At the prison bakery. © IWPR 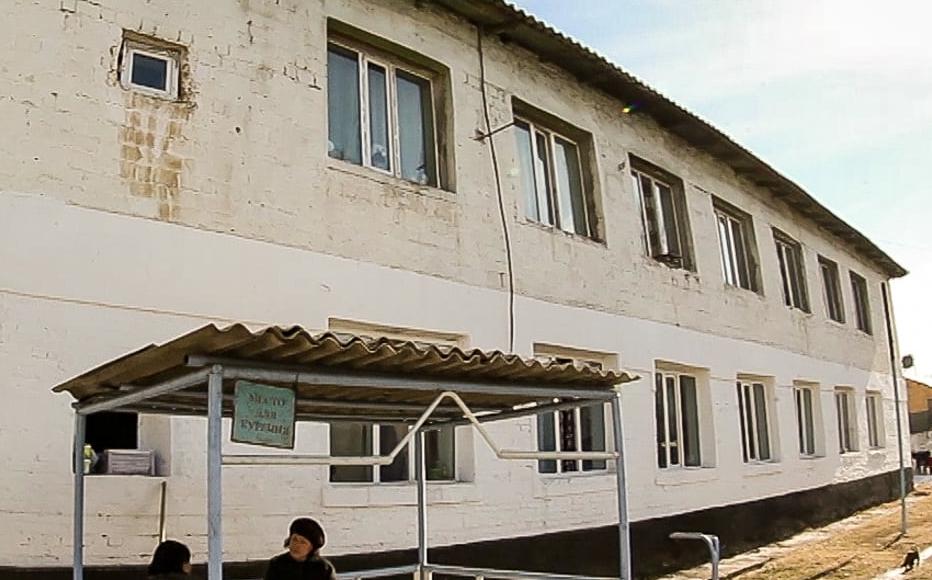 The majority of women serving sentence at Stepnoe were convicted for murder. The second most frequent crime here is fraud. © IWPR
The link has been copied

The day starts early at Kyrgyzstan’s only women’s prison.

Around 300 inmates are woken at 6.30am at the facility in Stepnoe, a village close to Bishkek.

The youngest convict is 15 while the oldest is over 70. Most have been convicted of murder or fraud. There are also three women living here with young children.

After breakfast at 7am, they fill their day doing menial tasks including sewing, baking, making army boots and producing soya milk.

Begayim, 35, is a single mother-of-five who was convicted for her part in a criminal enterprise.

She said she was grateful for her job in a prison workshop sewing uniforms for the Kyrgyz military and other government agencies.

Not only does she earn some money that she can either use to purchase goods at the prison store or save for her release, but keeping busy distracted her from gloomy thoughts.

“My eldest daughter is 17, the rest are nine, eight, five years old, the youngest one is only a year and eight months. All of them are now in an orphanage,” she said.

She has nine more years to serve.

(See A Month in Prison in Kyrgyzstan)

But while prison conditions are not too onerous, convicts face further problems when they finish serving their sentences.

More than 2,000 women are convicted of criminal and civil offences each year in Kyrgyzstan, a country of six million, with around 15 per cent going on to serve a jail term.

Although the numbers of female inmates are not large, the social repercussions of serving time in prison can be far-reaching.

According to the Kyrgyz Penal Service, 30 per cent of women released from prison go on to reoffend.

“[Those who reoffend] are mainly married women with children who have been imprisoned in their 30s and served from between ten to 15 years in jail,” explained Jamal Frontbek kyzy, who heads the women's NGO Mutakalim and who has worked with female offenders for many years.

Often rejected by their families, women faced a bleak future after their release from prison, she continued.

“While [women] serve their sentence in prison, their husbands marry other women. Children conceal the fact that their mothers are in prison and prefer to say that they are working in Russia or Kazakstan,” Frontbek kyzy said. “Upon release, mothers are usually not welcome in their own families and are asked not to interfere in their children’s lives. These women are left with no families, no children. Many commit another crime and end up in jail again.”

Even those with university degrees could only hope for low-paid physical jobs, she stressed.

“Those who served five to 10 years in prison find it difficult to adapt to society unless their relatives are ready to help them [with jobs],” Frontbek kyzy concluded.

“If one is imprisoned once, he or she joins the ranks of potential criminals [forever],” he said.

Mayram (not her real name) was recently released from prison after serving a six-month sentence for drug-dealing. She fears that her time inside has marked her for the rest of her life.

Despite working as a schoolteacher for 30 years, the 55-year-old told IWPR she now doubted she would ever find another job within the largely state-run education system.

“I sold drugs because of poverty. Life is complicated. Only after I was imprisoned did I realize that it was possible to survive on a teacher’s salary,” Mayram said.

“If you have a criminal record, you won’t be employed by the state,” she continued. “Now I don’t know what will happen, it is unlikely I will ever be employed again. I can just retire.”

Efforts are already underway to improve Kyrgyzstan’s criminal code. A reform process initiated in 2015 led to a year of expert consultations, with a new draft published on October 5, 2016. The public is now welcome to make suggestions.

Some experts think that greater efforts should be made to keep female criminals out of prison, suggesting, for instance, that more minor economic offences be covered by civil rather than criminal law.

Shoola Kachkyn kyzy, the head of the women’s prison unit, told IWPR that while most female convicts were serving time with murder, the second largest group were serving sentences for fraud.

“We have a lot of women caught for fraud. Everyone takes out loans nowadays. Those that fail to pay back on time [are convicted],” Kachkyn kyzy said.

Kayipov argued that debtors should be given a chance to repay debt under the civil code instead of being incarcerated.

“If a person commits a minor offence for the first time, he or she should be eligible for a non-custodial punishment…[even repeat offenders] must pay the damage caused to the aggrieved party. If the damage is fully paid, there should be no imprisonment,” the former justice minister said.

Kyrgyz ombudsman Kubat Otorbaev questioned the use of bringing criminal charges against people for non-payment of debts.

"I visited the women’s prison and talked to convicts. I looked at their cases. Thirty to 40 per cent of [them] were convicted for fraud. Many of them used to sell stuff on the market. When prices fall, they borrow money from someone, then they fail to pay, and the other party files a claim against them. That’s how they get arrested,” Otorbaev told IWPR.

“That’s not how it should be. It should be the civil court’s prerogative to consider these trade relations,” Otorbaev said.

His office has established a working group to mitigate punishment for women committed for minor crimes because of the wider societal impact.

Anara (not her real name) was sentenced to eight and-a-half years for fraud after she was unable to repay a bank loan she had taken out to develop her business.

“I will turn 60 in September. My heart aches,” Anara said. “My arrest had a dreadful impact on my family. My husband left me. Upset at what his father had done, my son left for Russia. I have two-and-a-half more years to serve.”

Kyrgyzstan
Detentions, Women
Connect with us