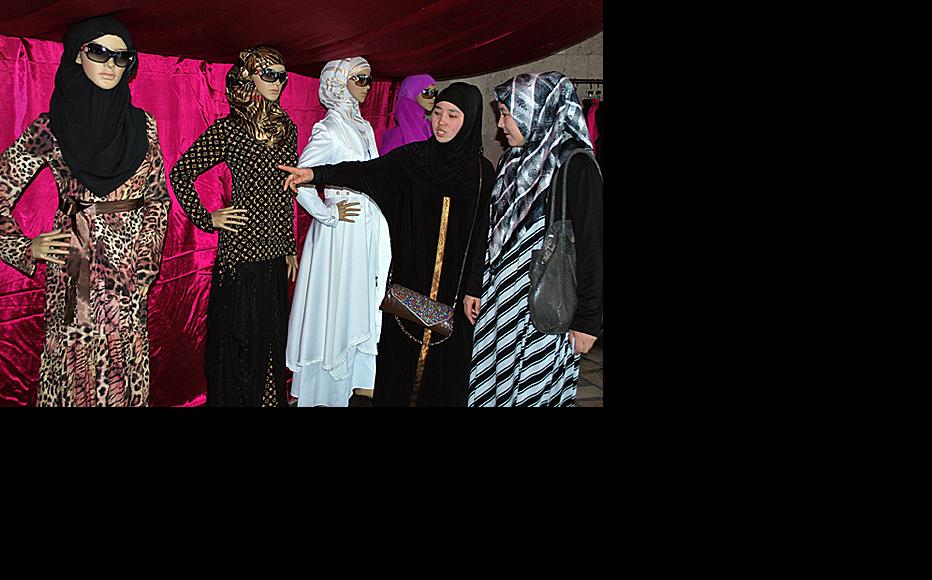 For the last six months, 17 year-old Zarina Barinova has worn a Muslim-style headscarf whenever she goes out in northern Kyrgyzstan’s Chui province.

A confident and outspoken student from the town of Karabalta, Barinova defies the common stereotype in Kyrgyzstan that women wearing “hijab” or Islamic dress should be shy and retiring, typically from rural backgrounds, and raised only to be obedient housewives.

“As a rule, they’re seen as quiet, dull, obedient and submissive people who can’t speak Russian,” she said. “In reality, that’s far from being the case. I went to a Russian-language school, I’ve done well at my studies and I’m involved in various activities at college.”

Women in urban areas are more likely to know Russian, the lingua franca, in addition to Kyrgyz or a minority language.

Barinova knows that when people see her head-covering, they may jump to conclusions. But that does not matter to her.

“I am answerable only to Allah,” she said.

“When I’m wearing hijab, I feel protected. Young men don’t harass me, and I feel I get treated with more respect within my group."

Since adopting hijab, Barinova has not altered her plans – she still intends to complete her studies, find a job and get married.

Barinova was raised in a religious household; her parents are devout Muslims who pray and have made the pilgrimage to Mecca.

But increasing numbers of women from non-religious backgrounds are taking up Islam and adopting hijab, often as a matter of personal choice rather because of family background.

The growth in hijab-wearing is happening in the more secular north of Kyrgyzstan as well as in the south, where Islamic observance was traditionally stronger and more women covered their heads as a matter of course.

The situation is changing in the south, too. Whereas women often just wore a local-style headscarf, now many opt for a more enveloping form that covers the neck as well as the head.

The changing patterns nationwide reflect an evolution in developing attitudes towards Islam, which used to be viewed as backward-looking – a legacy of Soviet atheism – but now is seen by many as a source of spiritual guidance through turbulent times.

Since the collapse of the Soviet Union, Kyrgyzstan has undergone bouts of instability. Its first president, Askar Akayev, was ousted in a popular uprising in 2005. He was replaced by Kurmanbek Bakiev, but he too was forced out in April 2010. In June that year, more than 400 people were killed in ethnic clashes in southern Kyrgyzstan.

Analysts believe that in the north especially, people are embracing Islam as part of an attempt to fill the post-Soviet ideological vacuum.

He believes the differences between religious attitudes in the north and south are disappearing.

“Even in the north, you now see many women wearing hijab, with the rising number of observant people, including women,” he said.

Kadyr Malikov, an Islamic expert and head of the Religion, Law and Politics Centre, said many people turned to Islam through “a personal quest, struggle and reflection” rather than because they were brought up that way.

Thirty nine-year-old Saltanat (not her real name) was born and raised in the capital Bishkek and has worn hijab for more than a decade.

She has a higher education degree, and became more interested in religion while lecturing at a foreign-funded university, where she taught alongside Arab colleagues. She initially wore modern fashions before making the change.

“No one ever asked me to start wearing Islamic dress. I came to [Islam] on my own terms, out of respect to the people I worked with. I wanted to study Arabic, learn more about Islam and read the Koran,” Saltanat said. “For me, hijab is not just clothing. It’s about responsibility before Allah, faith and choice.”

Like many of her peers who grew up under Soviet rule, Saltanat grew up in a secular household. She remembers when hijab-wearing women began appearing in the Kyrgyz capital after the Soviet Union broke up in 1991 and Muslim missionaries started arriving from abroad.

“I remember clearly what I thought of the first young women who appeared in hijab on the streets of Bishkek,” Saltanat said. “I regarded them as backward, narrow-minded village women who weren’t very well educated.”

As part of the general revival of Islam in Kyrgyzstan, many mosques have been built and more people attend them than before.

Nonetheless, negative attitudes towards Islam still persist. Some see outward signs of devotion like hijab as the products of unwelcome outside influence, and as a departure from Kyrgyzstan’s own tradition, in which faith was largely a private matter and public life was secular.

Saltanat described how a woman she knows was pressured not to wear a Muslim headscarf at work.

“An acquaintance of mine who’s a nurse at a state hospital had to fight for her right to wear the hijab,” Saltanat said, adding that she had experienced similar pressure herself, though to a lesser extent.

Nazira Jusupova, a journalist based in the northwestern town of Talas, said hijab was becoming a normal fixture of life there. And in another northern town, Naryn, city resident Erkingul Bokoeva said Muslim headscarves were less common there, but this was starting to change.

The trend has fostered a growth in the number of shops selling headscarves and halal-certified cosmetics that contain neither alcohol nor animal extracts.

Ayjan, a 27-year-old shop assistant in Karabalta, said her store was doing a brisk trade.

“Our shop opened six months ago and the number of clients is on the up,” she said. “We get women of various ethnicities coming in – Kyrgyz, Uzbeks, Uighurs, Dungans [ethnic Chinese Muslims], and even Russians who’ve converted to Islam. We help them to choose hijab for both casual wear and festive occasions.”

Ayjan has worn hijab for almost a year, and says she was influenced to do so by friends at university in Bishkek.

“We used to live in the same student house and we had conversations – that’s how I came to Islam,” she said. “My parents welcomed it, and because of the example I set, they too started fulfilling the Muslim obligations.”

The shops are a significant development – according to Saltanat, ten years ago no one sold Muslim headscarves, and no one knew how to make them if you tried to order one.

Mayramgul Kadyrova owns a clothing business that makes the headscarves.

“Most of the workshops make inexpensive, standard headscarves, as if they’re just testing the market. I think some of them will specialise in hijab in future, and quality will improve accordingly,” she said. “For now, women who want to buy a beautiful hijab prefer to buy imports from Turkey or Syria.”

As well as adopting the hijab, some women are also spurning cosmetics.

Saltanat usd to wear light make-up in public, but now only puts it on at home.

“When I see girls in hijab and wearing make-up in public, I understand that they’re just at the beginning of the road,” she said.