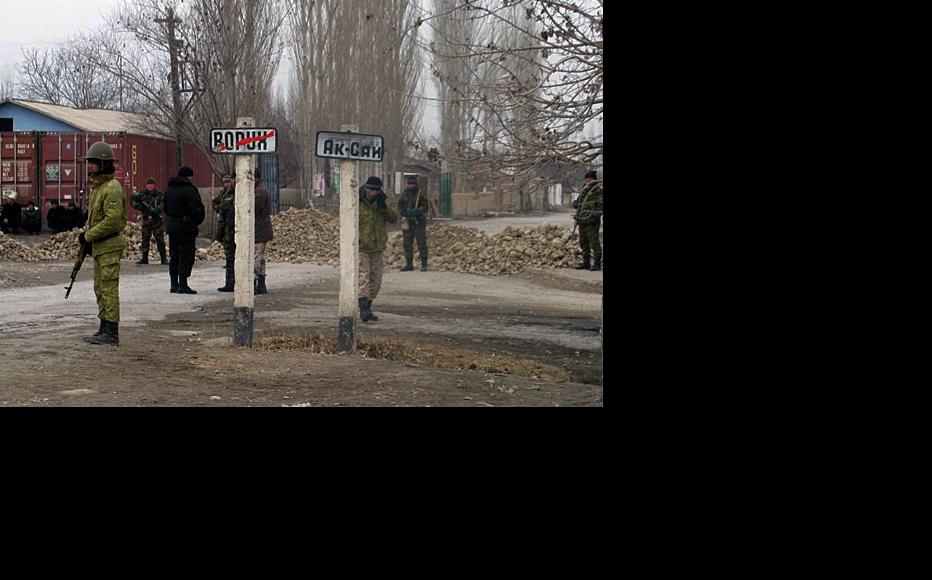 Tajik troops patrol the outer limits of the Vorukh enclave. (Photo courtesy of RFE/RL Tajik Service. © RFE/RL)
The link has been copied

Tensions are still running high around a Tajik enclave in southern Kyrgyzstan after border troops clashed on January 11. While frictions are common on the complex borders that run through the Ferghana Valley, this latest incident stands out because it escalated into a full-scale diplomatic row.

Kyrgyzstan recalled its ambassador from Dushanbe for consultations, and the country’s border protection service issued an angry statement after its Tajik counterparts turned up for talks on the ground in full combat gear. The January 14 statement said Kyrgyzstan’s frontier guards were coordinating with other parts of the security services and were ready for anything, even to “repel a possible armed attack”.

A later press release the same day sounded a more conciliatory note. It said the heads of the two countries’ border services had talked by phone and “resolved” the immediate crisis. The Kyrgyz received assurances that Tajikistan was seeking to deal with the dispute through diplomatic channels and was keen to avoid any further escalation of tensions.

The January 11 incident took place on the outskirts of Vorukh, an island of Tajik territory entirely enclosed within Kyrgyzstan’s Batken region. It is home to around 40,000 ethnic Tajiks, and Kyrgyz residents living on either side of it used to have to drive through it to get to different parts of Batken, To avoid the occasional frictions this caused, the Kyrgyz authorities are building a road intended to bypass the enclave completely. (See Tajiks, Kyrgyz Grapple With Frontier Issues on a clash that occurred last year.)

Trouble broke out when Tajik frontier guards stationed in Vorukh confronted workers laying a section of the road running through an area whose sovereignty is disputed.

In the ensuing standoff, Kyrgyz and Tajik border forces fired shots – each later accused the other of starting it – and two of the former and three of the latter were injured.

While firearms have been used in past incidents, this is the first time the deployment of heavier weapons has been reported. The Kyrgyz border service alleged that the Tajiks fired mortar shells and rocket-propelled grenades, a claim Dushanbe has not responded to.

The Tajik and Kyrgyz governments generally enjoy good relations, in stark contrast to either’s relations with Uzbekistan, which also has common borders and enclaves within Batken. (See Enclave Issues Challenge Uzbek, Kyrgyz Leaders on this issue.) That means they often act together to defuse tensions on the ground.

On this occasion, however, both sides took a stand. Tajikistan’s foreign ministry insisted its troops had every right to block work on the contested stretch of road. The Kyrgyz authorities issued two protest notes, closed frontier crossings and said they planned to press on with the highway regardless. Both countries sent regular army units up to their respective borders.

In administrative terms, Vorukh comes under Isfara district, part of the Soghd region of northern Tajikistan. Murtazo Egamov, a local member of the People’s Democratic Party, told IWPR that Soghd’s deputy governor, Jumaboy Sanginov, met residents to pass on a message from central government that “Tajikistan is not going to compromise on even a centimetre of its territory”.

A spokesperson for Kyrgyzstan’s border service, Gulmira Borubaeva, told IWPR that only half of the 970-kilometre-long boundary with Tajikistan had been agreed and properly marked out.

“Unfortunately, border delimitation is a very complex issue which requires both sides to be willing to step back and make compromises,” she said.

“We believe the Tajiks are categorically against the bypass as they fears that one of the Tajik villages [within Vorukh] will be cut off, even though we have offered assurances that we will not let that happen.”

Razia Osorova, the local government head in Kok-Tash, a Kyrgyz village close to Vorukh, told IWPR that the highway was an essential lifeline for people living in either part of Batken, who are currently separated by the enclave.

“This bypass is very important to us. It would allow free movement to other parts of the country for residents of four villages,” she said, adding that the far eastern part of Batken risked turning into a kind of enclave. “That’s exactly what the Tajiks want, so they’re opposed to the road being built.”

“We would rather die than leave our land,” she added.

Osorova said residents of Kok-Tash and the nearby settlement of Aksay no longer felt safe.

“At least five or six conflicts of various kinds occur on a monthly basis. The Tajiks outnumber us several times over. Sometimes they block the road, sometimes they start a fight or harass our women,” she said.

Akyl, who lives in another Kyrgyz village, Bozadyr agreed that driving through Vorukh could be dangerous, as people sometimes got assaulted by local residents.

Relations between the two communities were not always bad, Akyl said, attributing the deterioration to disputes about the border.

“The Tajiks say this is their ancestral land, hence it is their’s. The Kyrgyz say, ‘No, it’s our land.’ It’s a source of constant conflict,” he said.

Things are made worse by a demographic imbalance, Akyl said.

“They [Tajiks] feel an acute shortage of land, so they stake claims on our side. They move out half a metre and plant a tree or divert water,” he said. “We’ve tried to ignore it all. It’s only been in recent years that we’ve started standing up for ourselves. The disagreements used to be about access to pasture land and water, but now the road has added to the tensions.

“Frankly speaking, we’re tired of living like this,” he concluded. Officials came and went and made promises but nothing ever got done. “The only thing we want is for someone to come and resolve our border problems,” he said.

In Dushanbe, Saifullo Safarov, deputy director of the Center for Strategic Studies, a think tank affiliated with the Tajik president's office, claimed that the conflict was being fuelled by businessmen in Kyrgyzstan who had vested interests in building the bypass.

“This group of businessmen are pursuing their own financial interests… There was no need for this road. It’s only now that they are saying it’s vitally necessary to build it,” Safarov said.

On the allegations that Kyrgyz nationals are harassed when they go through Vorukh, Safarov pointed out that traders from Kyrgyzstan were a common sight in Tajikistan.

“The Kyrgyz don’t feel uncomfortable at our markets,” he said.

Nemat Mirsaidov, a political analyst in northern Tajikistan, said the authorities had been doing their best to defuse the sense of frustration among Vorukh residents.

“But tolerance has its limits, too,” he said.

Mirsaidov said it was important to hold onto the disputed areas of land that lay between Vorukh and nearby Kyrgyz settlements.

“If we now give up those territories and hand them over to our neighbours, we’ll face economic as well as cultural losses,” he said. “What’s needed is for the presidents of both countries to come to the area to see with their eyes what’s happening here and how people live. We need them to intervene,” Mirsaidov said.

A Dushanbe-based analyst who asked to remain anonymous said escalating tensions was not in the interests of either Kyrgyzstan or Tajikistan. Both have a troubled relationship with Uzbekistan, which routinely obstructs traffic heading to Tajikistan.

“Since 2010, when Uzbekistan refused to allow its railway to be used by trains going to [Tajikistan’s] southern Hatlon region, all freight goes through Kyrgyz territory,” he said. “It [Kyrgyzstan] is an important transit route for bringing construction materials and food stuffs to Tajikistan from Russia via Kazakstan,” the analyst said.

Salamat Alamanov, an expert on border issues in Kyrgyzstan, pointed to wider problems with the way local disputes were dealt with.

“They resort to force when things could be resolved through negotiations. It’s an emotional response, not an intelligent one,” Alamanov said. “Until the border is demarcated, conflicts will continue to happen.”

Timur Toktonaliev is an IWPR contributor in Bishkek. Lola Olimova is IWPR Tajikistan editor. Nazarali Pirnazarov is a correspondent for the CA-news agency in Tajikistan.