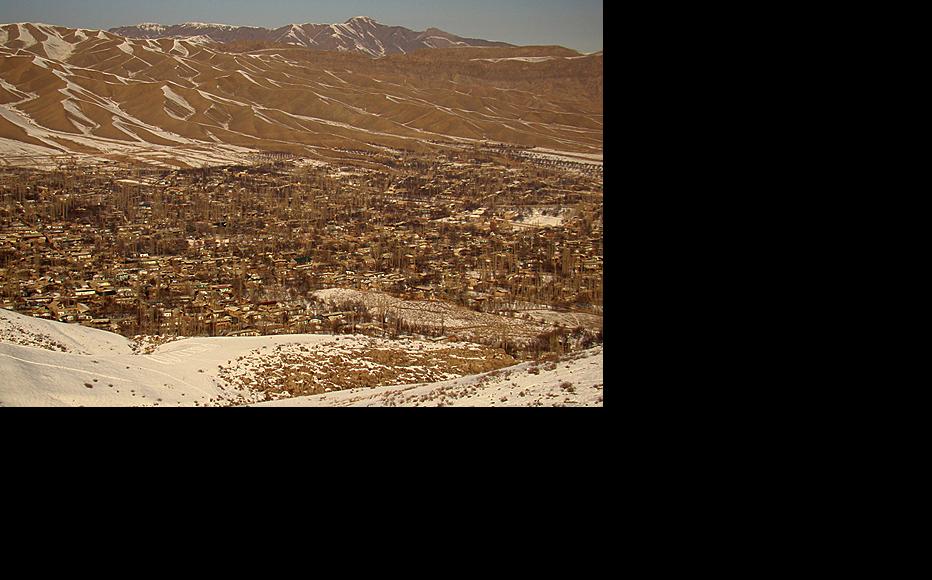 View of the Sokh enclave, which belongs to Uzbekistan but is located inside Kyrgyz territory. (Photo: IWPR)
The link has been copied

Life in Sokh, a piece of Uzbek territory inside Kyrgyzstan, may be getting back to normal, but experts warn that the many unresolved issues around the enclave could lead to further tensions.

Trouble broke out on January 5 when Sokh residents confronted Kyrgyz electricity workers who had strayed across a road that forms the boundary with Uzbek territory. The following day, a group of people from Sokh raided the nearby Kyrgyz village of Charbak, damaging property and holding a number of residents captive for a while.

“It was like being in a war,” one eyewitness told IWPR. (For a report on the clashes, see Kyrgyzstan Enclave in Turmoil.)

As a way of containing the unrest, Sokh was effectively cut off from the rest of Uzbekistan. The border crossing on the road that leads through Kyrgyz territory to the enclave was shut, halting all travel and trade.

The Uzbek authorities made a conciliatory gesture by paying compensation for the damage done in Charbak.

The border was fully reopened after talks between officials from the two countries, Gulmira Borubaeva, spokesperson for Kyrgyzstan’s border guards, said on February 1.

The tensions had practical implications for residents of the area. It took more than a week to negotiate deliveries of aid and basic supplies to Sokh, and migrant workers returning to the enclave had to wait for the border to reopen.

Sokh sits in the middle of southern Kyrgyzstan’s Batken region, a sliver of land sandwiched between Uzbekistan to the north and Tajikistan to the south. The main way of travelling between Batken’s eastern and western parts is via Sokh – in other words, foreign territory.

Borubaeva said that as part of their agreement, officials committed to “ensuring unhindered travel for residents of Batken region via the Sokh and Shahimardan enclaves”.

Shahimardan is another Uzbek enclave located further east in Batken.

Experts in both countries told IWPR that long-running frictions specific to territorial enclaves, in addition to a general failure to demarcate and manage the long Kyrgyz-Uzbek border winding through the Ferghana Valley, meant further problems were likely.

Mars Sariev, an analyst in the Kyrgyz capital Bishkek, explained that Uzbekistan has long been concerned by the lack of direct access to its territory in Sokh. Travellers using the connecting road have to go through Kyrgyz border controls.

Uzbekistan has in the past proposed a swap where the Kyrgyz would cede the road in exchange for another chunk of land. But Sariev said this was unlikely as Kyrgyzstan would not want to create a long barrier that all but divided Batken.

Then there is the issue of frontier demarcation, which remains only partially complete. In the case of Sokh, the formal boundary line separating it from the surrounding Kyrgyz lands has yet to be drawn, except from one seven-kilometre stretch fenced off with barbed wire.

“The rest is still disputed, and barbed wire can’t be laid as there’s been no process of delimitation,” Sariev said.

Kyrgyz border guards spokesperson Borubaeva confirmed to IWPR that defensive structures like fences could only exist along “sections of the frontier stretches that have been agreed by both sides”.

The population of Sokh – a town and some nearby villages – consists mainly of ethnic Tajiks rather than Uzbeks. The numbers have risen to close to 70,000, and the residents need access to farmland and pastures. So do the nearby Kyrgyz villages, and land disputes are more than likely to occur when no one is really clear about what belongs to each country.

“I can understand the Tajiks. It’s a small territory and they need pastures to feed their livestock,” Sariev commented. “It’s a no-win situation. Either they’ll be forced to leave, or the situation will deteriorate.”

An additional obstacle to resolving questions about Sokh is that Uzbekistan continues to exploit underground natural gas deposits at a nearby site called Borgondu, despite a past agreement on paper to cede it to Kyrgyzstan.

“This area has been officially handed over, but Uzbekistan’s infrastructure for gas production and storage remains there and is still in use,” Sariev said.

These local issues relate to the specific problems of managing an enclave so that neither state lose out. But they are also part of the much larger picture of difficult relations between Uzbekistan and Kyrgyzstan.

Uzbek president Islam Karimov keeps his own population firmly under control, and he is mistrustful of Kyrgyzstan for its occasional revolutions and attempts to create democratic institutions. Mass violence between ethnic Kyrgyz and Uzbeks in the south of Kyrgyzstan in June 2010 further eroded Tashkent’s confidence in its neighbour.

From a Kyrgyz perspective, Uzbekistan is an uncertain neighbour prone to cut off natural gas supplies and seal the border whenever it is irked.

Tashkent oppose plans to build new hydroelectric plants in Kyrgyzstan, as it fears they will dam up water it needs for irrigation. Sariev believes that until Uzbekistan can be confident of derailing Kyrgyzstan’s dam schemes, it will be reluctant to conclude negotiations on border demarcation.

On a more practical level, negotiations on border issues are complicated by the rigidly hierarchical system in Uzbekistan. Kyrgyz officials who attend bilateral complain that their Uzbek opposite numbers constantly have to refer back to Tashkent, obstructing progress.

Kurbanbay Iskandarov, a member of the Kyrgyz delegations on frontier demarcation, told the Fergana.ru news agency that while his team engaged local experts from disputed areas and listened to their ideas, the Uzbeks took advice only from their superiors in Tashkent.

Sukhrob Ismailov, head of the Expert Working Group, a think-tank in Tashkent, agreed that the talks process was slow because no decision could be taken without President Karimov’s approval.

Uzbek negotiators, he said, “may discuss things, they may propose something, but once they return to Tashkent, it becomes apparent that these matters are going to under discussion for a long time yet”.

“In Tashkent, everything is up to Karimov,” he added.