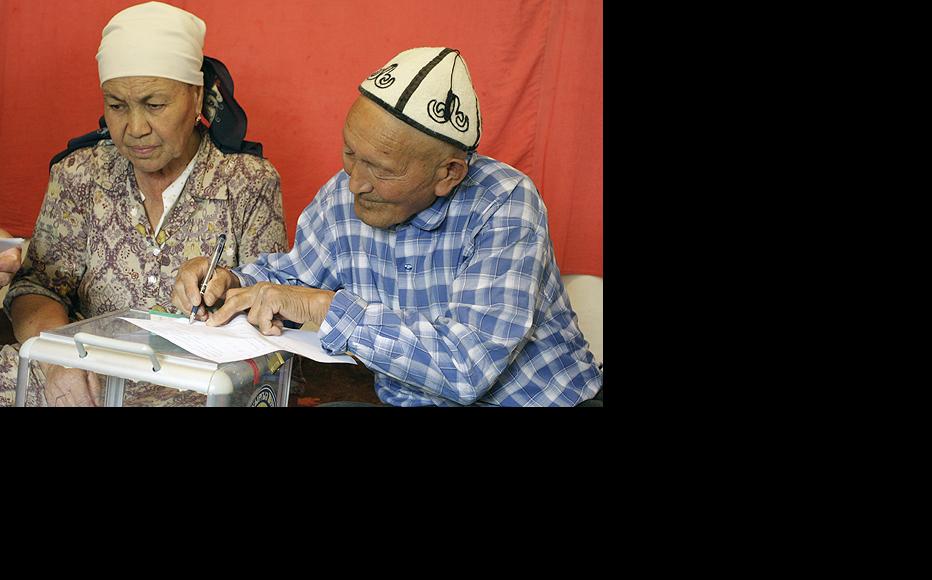 Rural voters are seen as prone to conservative choices, but political parties are keen to woo them as they account for such a high percentage of the population. (Photo: Igor Kovalenko)
The link has been copied

Ahead of the October 10 election, political parties in Kyrgyzstan are busily courting voters in the countryside. Not only does the rural electorate represent a significant chunk of the population, it is seen as more receptive to campaign pledges than people in the towns.

A record 29 parties are taking part in the parliamentary ballot which analysts expect to be the closest to a free and fair parliamentary race Kyrgyzstan has ever had.

This time round, competition is keener than ever as a large number of political parties, with no obvious front-runner, battle for a share of the vote in which they have to win over five per cent nationwide and 0.5 per cent in each province.

The election follows months of political turbulence which began in April when the then president Kurmanbek Bakiev was ousted from power. This was followed, in June, by ethnic clashes in and around the southern cities of Osh and Jalalabad, which left over 400 dead and caused massive devastation.

Rural voters, unlike their urban counterparts, tend to live in stable, homogenous communities where kinship ties are strong. But analysts say voting patterns in the countryside are not dissimilar to the overall picture – some have already have made up their minds and will choose the party they have backed over a long period; others are undecided, and a proportion will not take part, either because they are disillusioned with politics or because they are too preoccupied with day-to-day survival to think about other things.

Pavel Dyatlenko, a political analyst with the Polis Asia think-tank, says the rural population is a magnet for parties for numerical reasons alone, since it accounts for some 65 per cent of the nation as a whole.

“The focus on the rural electorate is evident from the content and style of the parties’ advertising material,” he said.

VOTERS MOVED BY ISSUES AS WELL AS TRADITIONAL PARTY ALLEGIANCE

Dyatlenko described the varying mood among voters in the countryside. Some know exactly who they will vote for, one of the established parties with a strong presence in the particular region they live in, some are still wavering, and “a proportion have absolutely lost faith given that elections over the past 15 or 20 years have involved procedural irregularities and candidates have failed to keep their promises”.

In a straw poll of voters around the country, IWPR found quite a few who planned to vote either for a longstanding local favourite, or for a party whose pledges they believed.

“The majority of people in our village will vote for Ata-Meken,” Jyldyz Baygojoeva, a teacher from the village of Jemish in the northern Talas region, said, arguing that people trusted the party’s leader Omurbek Tekebaev and had no faith in other groups.

The main issue Baygojoeva wanted to see addressed was the shortage of staff and low salaries in Kyrgyzstan’s schools.

“I am sure [Ata-Meken] will fulfil its promises,” she said.

In the southern town of Kara-Suu, Nurayim Beynazarova, whose main concern is economic revival and job creation, said she would back the Social Democratic Party.

“I’m drawn to the position of [party leader Almazbek] Atambaev, by what he says and by the party’s programme,” she said.

Both Ata-Meken and the Social Democrats are closely aligned with the current interim administration that came in after Bakiev’s removal.

People in rural areas tend to respond more to campaigning, according to Olga Churakova, a Bishkek-based PR consultant who is part of an election monitoring project..

“Educational levels are lower and people are less well-off, so they have a stronger desire to improve their lives,” she explained, adding that when parties held public meetings in villages, it was something of an event and people would come along because there was not much else to do.

Tatiana Vygovskaya, a conflict studies expert and director of an NGO called Égalité, says rural voters take the political process personally, and parties ensure they have people on the ground to engage with them.

“To put it bluntly, if an urban resident doesn’t like something about a slogan, they’ll talk about it, and that’s that. People in rural communities, however, can express their dislike through physical action,” she said.

Dyatlenko said rural communities in the countryside tended to be more ethnically homogenous, leading to the risk that politicians would play on Kyrgyz nationalist sentiment in the wake of the recent violence, in addition to exploiting older traditions of regional and clan affiliation.

Vygovskaya said that while party campaign material was not overtly nationalist in tone, the issue was undoubtedly a live and sensitive one.

“There’s been so much talk of ethnic conflict in the media and on internet forums – most of it conducted in an unprofessional and inappropriate manner – that it’s resulted in a build-up of societal aggression. For some, it’s the sense that they’re been made to feel guilty, while for others it’s about fear,” Vygovskaya said.

Assertions by some politicians that “Kyrgyzstan belongs to the Kyrgyz” thus find a ready audience, she said, while other parties deliver more subtle messages in the same vein.

“The most important thing is that slogans don’t translate into actions, since there’s a risk that in such circumstances, new ethnic conflicts could arise with no justification,” Vygovskaya warned.

One of the parties that has been accused of exploiting nationalist sentiment is Ata-Jurt, a new group which numbers several Bakiev-era officials among its leadership. Particular offence was caused by an interview in which its leader said the Kyrgyz must not be “at a lower level than other ethnic groups”.

Ata-Jurt representative Imankadyr Rysaliev rebuffed allegations of nationalism during an IWPR-organised debate on September 28. The party consisted of “national patriots”, not nationalists, he said.

A voter in Osh who asked to remain anonymous said he would be backing Ata-Jurt precisely because it was not associated with the interim government.

“I’m not saying Ata-Jurt is an ideal party, but it has lots of people with practical experience,” he said. “When the June events happened, we were surprised that the authorities didn’t do anything…. Osh is a small city, and it wouldn’t be not difficult to come and restore order, and impose a curfew. But they arrived only several days later.”

Meanwhile, he said, “Ata-Jurt leaders were here and – without thinking that they might be shot dead – they were shuttling between the two communities [Kyrgyz and Uzbek] to reconcile them. They did something, they supported people, they spent their own money, so I think that they will be able to achieve something.”

For Uzbeks living in rural parts of southern Kyrgyzstan, the main issues that might affect voting patterns are security and the rebuilding of property destroyed during the violence. Many are pessimistic about the election and critical of the way the authorities behaved.

Nevertheless, Halima, an Uzbek voter in the village of Sharq, said she would be voting, although she did not say who for.

“I’m not particularly politically engaged but the most important thing that’s needed is security, and only an elected authority can provide that,” she said.

As winter was approaching, Halima was also hopeful that the government that emerges after the election would speed up reconstruction work.

“We’re very much hoping the new authorities, the new parliament will help us to put a roof over our heads in good time,” she said.

Dyatlenko noted in some of Kyrgyzstan’s poorer areas, a number of parties were using the time-honoured practice of buying votes.

“Sometimes it’s small sums of money and big promises, food may be given out, and agreements are made with respected local figures who can mobilise relatives and fellow-villagers to vote for this or that party,” he said.

At the same time, Vygovskaya said the electorate in Kyrgyzstan was much more clued up than in previous elections, and less susceptible to sloganeering. The recent political turmoil – “too many events in too short a space of time”, as she put it – had put people on their guard.

The rural voter, she said, was naturally conservative as well. “Rural populations have a more measured lifestyle with less risk-taking. They will choose outcomes with the least negative consequences for themselves,” she explained.

However, another group of voters, the “internal migrants”, are likely to behave in a more volatile way at the polls. Large numbers of people have gravitated from depressed villages in the countryside to Kyrgyzstan’s larger towns. They often find it hard to find work and accommodation, and are left only partially integrated into urban life.

Since they feel marginalised but harbour hopes of improving their lives, they may be more open to electioneering, and easier to mobilise for street protests.

“The internal migrants include many lot of people who’ve been driven to a state of despair. This is especially true of young people, who want everything and want it now,” Vygovskaya said.

Many migrants will nevertheless stay away on election day, either through apathy or because of the requirement that they vote where they are officially registered as resident, meaning an arduous and costly trip back home.

Mother-of-six Kadyra Nurieva, originally from Uzgen in southern Kyrgyzstan, now earns a living by selling vegetables from a street stall in Bishkek.

“I’m not taking part in the election; I won’t be giving my vote to anyone,” she said, explaining that the ballot would change nothing because elected politicians “don’t care” about creating workplaces.

Bulbul Mamatsaeva, from Kulja in the south and now selling bread in the capital, added, “I don’t like any of the politicians…. They all come along and promise to do this and that. But in the end, no one does anything.”