Kyrgyz Parties Gear Up for Election

Kyrgyz Parties Gear Up for Election 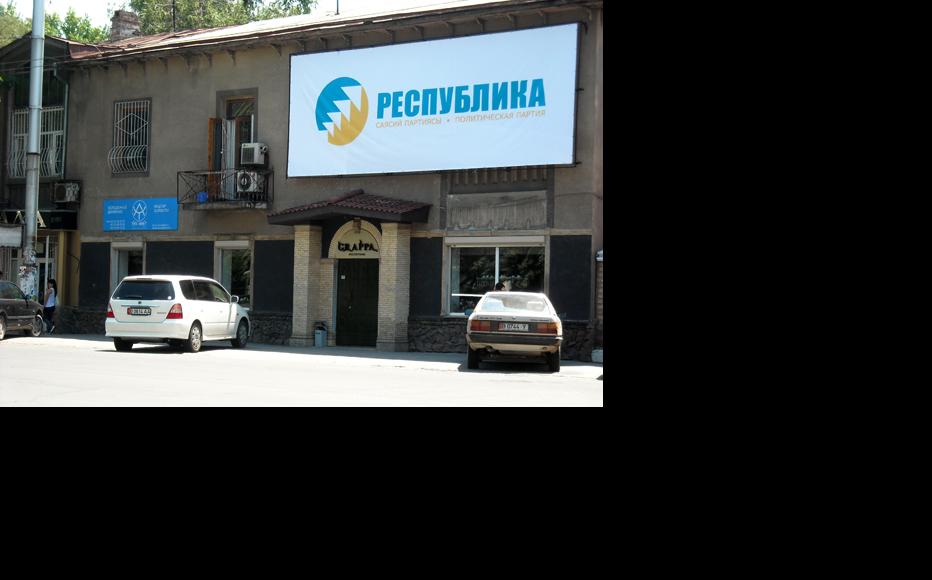 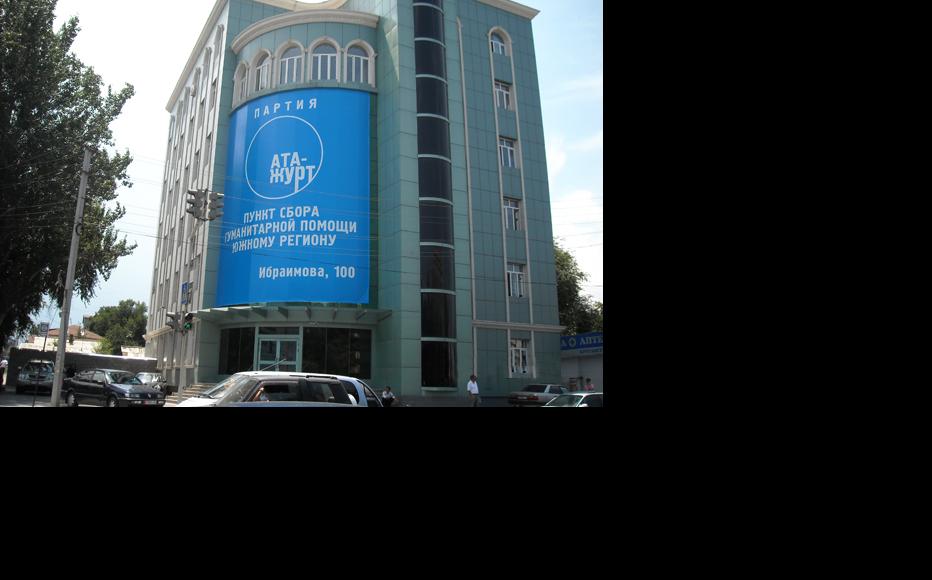 The Ata-Jurt party has made its name by delivering aid to conflict-stricken southern Kyrgyzstan in June. This giant poster is for donations collected in Bishkek. (Photo: Pavel Dyatlenko) 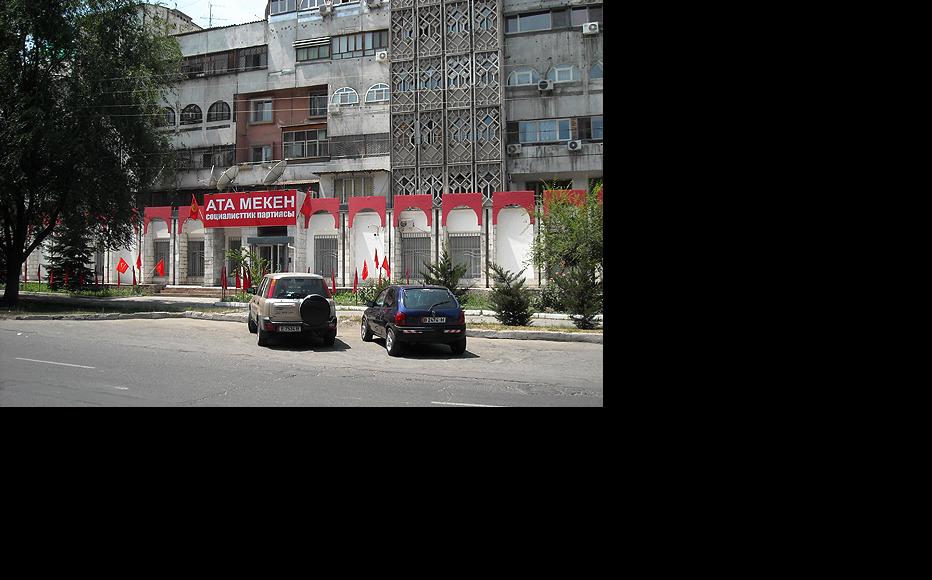 Offices of Ata-Meken, one of the longer-established parties that are expected to compete among themselves for pole position in the October election. (Photo: Pavel Dyatlenko)
The link has been copied

While Kyrgyzstan’s forthcoming parliamentary election is intended to produce the most democratic system ever seen in Central Asia, there are fears it could widen political divisions in a country still reeling from recent ethnic violence.

As senior members of the transitional government that came to power in April step down so that they can run for parliament, some political analysts have expressed alarm at the prospect of a political-free-for-all coming so soon after last month’s violence.

At least 330 people have been confirmed dead in several days of fighting, looting and arson attacks involving members of the Kyrgyz and Uzbek communities.

The authorities have decided against an earlier plan to bring the election forward and get it over with – and also against proposals to delay it to let tensions subside – and it will now take place on October 10. By law, official campaigning needs to begin at least two months beforehand.

In theory, the election could be a watershed, drawing a line under the recent violence and the more general political instability that has persisted since April, when the present leadership came to power after sitting president Kurmanbek Bakiev was driven from presidential office by popular protests.

Under a new constitution approved in a national referendum on June 27, parliament acquires more powers while the presidency becomes weaker. The winning party will get to pick a prime minister, who in turn chooses a cabinet.

To overcome past problems with dominant parties, another provision in the constitution limits the majority that any one group can get to 50 per cent plus five seats, meaning 65 seats in the expanded 120-member legislature. The authorities have also streamlined the procedures for setting up parties, allowing several to be set up in time for the October ballot.

The fact that the referendum went off largely peacefully and achieved a high turnout, despite the fear and disruption created by the violence in Osh and Jalalabad, has been used as an argument in favour of going ahead with the election despite concerns about the potentially divisive effects of political competition.

Acting head of state Roza Otunbaeva, whose appointment as interim president was approved in the same referendum, has pledged to ensure the vote is free and fair, and specifically to prevent politicians from using the power of the state to underpin their campaigns.

“No member of the interim government or member of staff of a government agency who is taking part in the election as part of a political party will use any public resources to support their activities; I mean state offices, transport, communications and so on,” Otunbaeva said on July 16, addressing the first meeting of the caretaker cabinet set up to replace ministers who have resigned to join the political fray.

For some commentators like political analyst Tamerlan Ibraimov, the stage is set for the most open contest Kyrgyzstan has seen to date.

“Today we have a truly pluralist political scene where any political force that believes itself worthy of representation in parliament can declare its intentions,” Ibraimov said.

Others argue that the multiplicity of factions and polarisation of views that are part and parcel of elections may not be what Kyrgyzstan needs right now.

“On the plus side, the presence of a large number of parties creates competition among them, which has the side-effect of preventing anyone monopolising the political scene,” Pavel Dyatlenko of the Polis Asia think-tank said. “The minus is that most of the parties are weak and show no tendency to merge.”

During the election campaign, rivalries between politicians who until now were united in the interim administration will undoubtedly come out into the open, and there is a risk that the heightened political tensions could be exploited by troublemakers seeking to incite more violence.

Although the precise causes of the mass violence in south Kyrgyzstan remain unclear, the government has pinned the blame for that and earlier localised unrest on diehard supporters of Kurmanbek Bakiev, who was driven from presidential office by popular protests.

Political analyst Marat Kazakpaev warns that the forthcoming election could be a source of further conflict.

“There might be attempts to create provocation,” he said, adding that this could be avoided if the authorities worked to ensure the election was scrupulously fair.

Before formal campaigning gets under way, political parties seem to break down into two distinct groups.

First, there are the groups led by politicians who until recently were prominent members of the interim government.

Almazbek Atabaev, who leads the Social Democratic Party, and Ata Meken leader Omurbek Tekebaev served as deputy prime ministers, and Temir Sariev of Ak Shumkar was finance minister. Another leading figure, Azimbek Beknazarov, has aligned himself with the United People’s Movement, formerly a broad opposition coalition when Bakiev was in power and now reconstituted as s separate party using its Kyrgyz acronym BEK.

Analysts predict that this group of heavyweight parties will make most of the running in the election race.

But these groups may be weakened by the perception that their leaders, as government members, did too little to halt last month’s ethnic violence. That could be particularly bad news for those whose traditional constituencies are in southern Kyrgyzstan.

“All the pro-government parties have a problem – the south,” Kazakpaev said. “They’re viewed there as senior officials who were ineffectual at the start of the conflict. The outgoing government enjoys very little authority in the south, and that’s going to make it very hard for them to pick up votes there.”

The second grouping consists of smaller parties, many of them newcomers, which could benefit from if the reputation of more established groups is seen to be tarnished.

These parties, Ibraimov said, “are only just gathering pace, so it’s a bit too early to say they are serious players. I think things will become more or less clear in four to six weeks’ time.”

Respublika, which was set up in late June by former Social Democrat Omurbek Babanov, positions itself as a centrist force with a focus on the economy.

Kazakpaev says this party is so small that Babanov will have little option but to seek a merger with other parties, providing they will accept it.

Similarly, Butun Kyrgyzstan (All Kyrgyzstan) was founded only in early June, 2010, and again talks mainly about social and economic matters.

It benefits from having as its leader Adakhan Madumarov, a former Bakiev official and speaker of parliament.

“Butun Kyrgyzstan is a promising party because Madumarov is an experienced politician… but it will have to merge with other parties as it has very few members – it has supporters in Jalalabad, and a few in Osh and Uzgen,” Kazakpaev commented. “Madumarov is an intelligent politician, and his party is potentially the second opposition force after Ata-Jurt. It would probably make more sense for the party to merge with Ata-Jurt if it wants to secure seats in parliament”.

The Azattyk (Freedom) Party was formed in early July by Ismail Isakov, a former defence minister who was part of the interim government. It combines support for the free market with a commitment to social welfare provision.

Marat Kazakpaev says that despite Isakov’s personal popularity, this party too will survive only through a merger because “it has no support in the north, and not everyone supports it in the south”.

According to analysts, Ata-Jurt is undoubtedly the strongest of the relative newscomers, and stands out for its Kyrgyz nationalist views.

It is led by Kamchybek Tashiev and .Akhmatbek Keldibekov, who served respectively as government minister for emergencies and tax office chief under Bakiev, the party has been around for a few years but came to prominence by delivering aid consignments to southern Kyrgyzstan last month.

“Ata-Jurt is a promising party, and represents the main opposition at the moment, as it will in the new parliament,” Kazakpaev said. “The party has substantial financial backing. The party’s leaders… have continuing voter support in the south. I am certain this party will be strong enough to get into parliament and form a new opposition there.”

One thing that unites many parties in Kyrgyzstan is that they are generally built around prominent political personalities.

“Unfortunately, what we have are leader-based parties, which has no future as a direction. Parties should be founded for ideological reasons, but that… doesn’t happen in Kyrgyzstan at the moment,” Kazakpaev said. “Parties are still weak, as they should have constant funding sources but don’t have them right now. They are trying to find sufficient resources to take them up to this parliamentary election.”

The parties have everything to fight for in the autumn election, given that the winners will wield significantly more power than any previous legislators. However, just getting that far will be an achievement for Kyrgyzstan’s fragile political system.

Political commentator Mars Sariev sees this election as a third major attempt to overhaul the Kyrgyz political system, following the “Tulip Revolution” of 2005 which brought Bakiev to power and the April 2010 revolt that toppled him.

“If this one fails, it will be fatal for Kyrgyzstan,” he said.