Once-powerful politician miscalculates by attempting to take over parliament.

Once-powerful politician miscalculates by attempting to take over parliament. 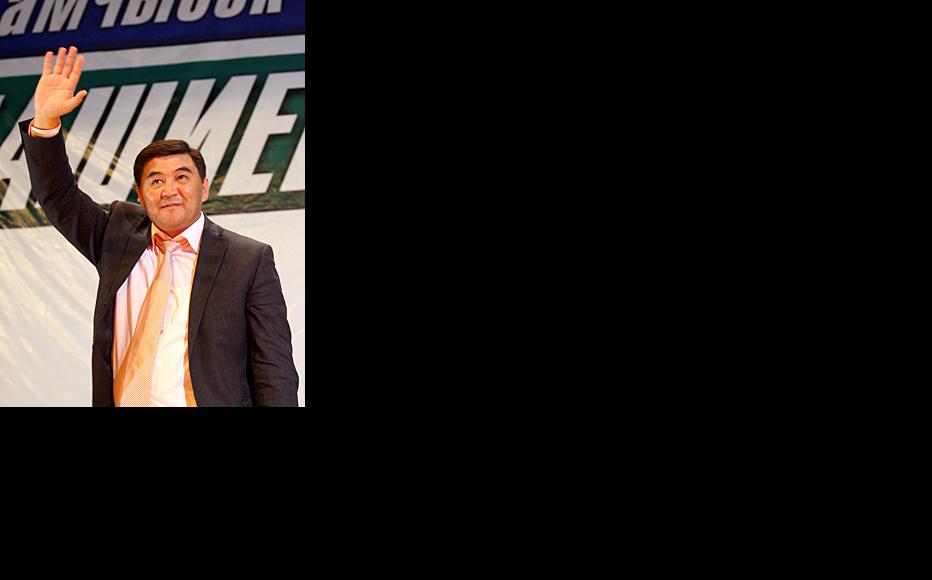 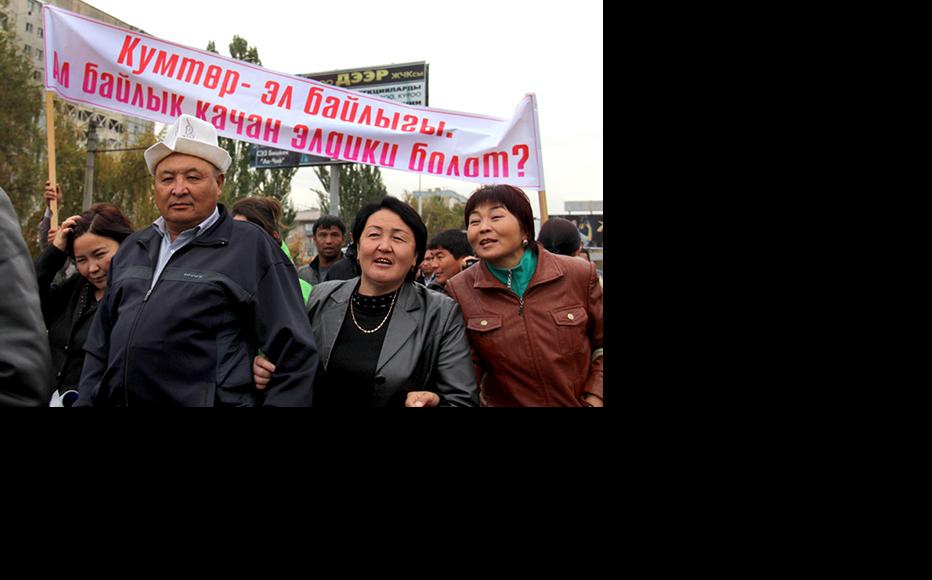 Demonstration in Bishkek on October 17 calling for the release of Kamchibek Tashiev and two other leaders of the Ata-Jurt party. (Photo: Svetlana Zelenskaya, courtesy of kloop.kg) 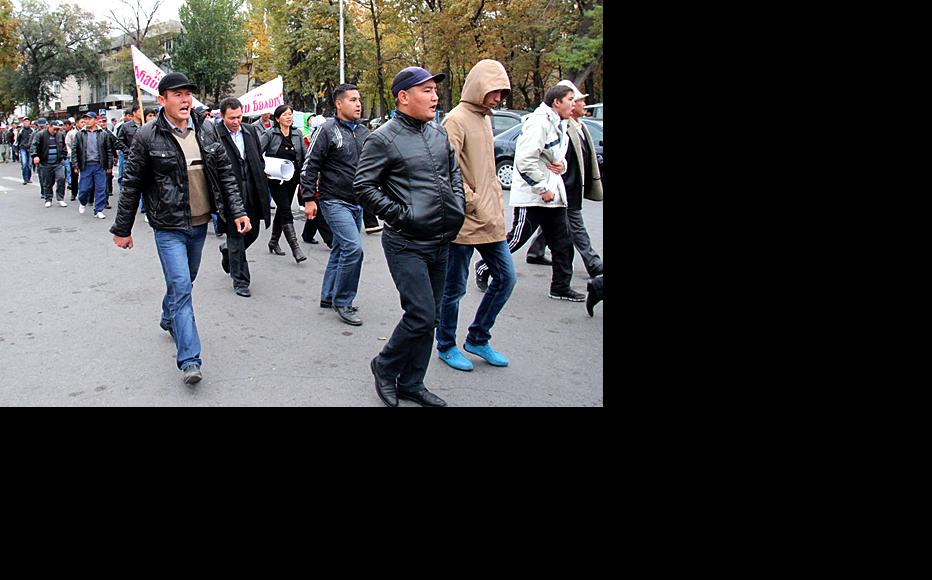 Ata-Jurt can still field loyalists, but no longer seems to have mass appeal. (Photo: Svetlana Zelenskaya, courtesy of kloop.kg) 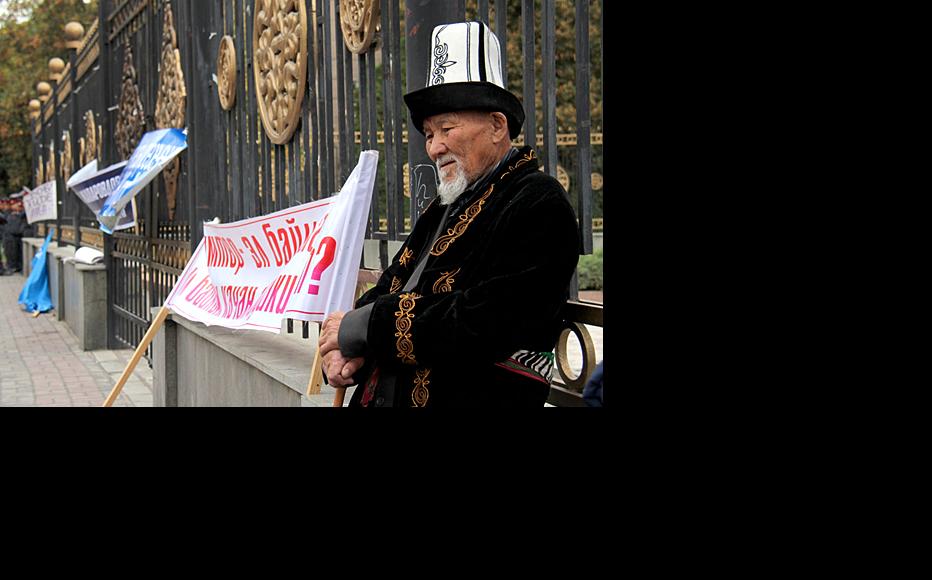 Kyrgyz nationalist leader Kamchibek Tashiev’s failed attempt to storm parliament suggests that the public no longer has an appetite for regime change of the kind seen in 2005 and 2010. It may also be a sign that Tashiev and his Ata-Jurt party are a spent force.

Tashiev and two other leading Ata-Jurt figures, Talant Mamytov and Sadyr Japarov, were arrested on October 3 after leading a crowd of supporters in an attempt to storm the Kyrgyz parliament.

They have been charged with publicly calling for a coup d’etat – a serious offence that can carry a 20-year jail term.

The day began as a rally of several hundred Ata-Jurt supporters outside the parliament building in Bishkek. They were calling for the Kumtor gold mine, currently worked by Canadian firm Centerra Gold, to be re-nationalised.

Addressing the crowd, Tashiev asked whether anyone would join him and seize power. He then led a group of some 50 men who climbed over the perimeter fence and tried to break into the parliament – of which he himself is a member. One politician has since given it the facetious title the “Fence Revolution”.

The security forces used tear gas and police dogs to hold off the attacking force. Three people were taken to hospital with gunshot wounds and seven more with minor injuries.

The parallels with the revolutions of 2005 and 2010 were obvious – massed crowds storming the seats of power and ousting their rulers.

This one, though, was an unmitigated fiasco. It resembled an unscripted amateur performance in which the leading actors showed little concern for those they pressed into service as revolutionaries, or for the potential casualties, which could have been a lot worse.

Ata-Jurt is greatly diminished from 2010, when it emerged out of nowhere in the wake of the large-scale ethnic violence that hit southern Kyrgyzstan in June that year.

Its Kyrgyz nationalist rhetoric caught the public mood of the time, and it won a majority – though not an absolute one – in the October 2010 parliamentary election, and became part of a governing coalition. By the end of 2011, however, it had been shoved out by its coalition partners.

Now in opposition, its leaders have bickered publicly this year and its nationalist agenda no longer seems to capture the public imagination.

With Tashiev in custody following what looks to have been a misjudged stunt, Ata-Jurt’s reputation looks badly damaged. This is at a time when the party was hoping to win seats in the capital Bishkek in the November 25 local elections.

Support for Ata Jurt remains strong in its powerbase, southern Kyrgyzstan. One rally there in early October drew several hundred supporters. But again, the wider public stayed away.

Smaller-scale protests over Tashiev’s arrest have taken place in Osh and Jalalabad, as well in Bishkek. The influential mayor of Osh, Melis Myrzakmatov, has lent his support, calling for the three politicians to be placed under house arrest rather than pre-trial detention, although he made it clear he did not approve of their actions.

The assault on parliament showed that the broader population is not ready for a repeat of the mass protests seen in 2005 and 2010. This phenomenon, known as “ketsin-ism”, from the Kyrgyz word for “out with him”, worked when the national leadership had so completely lost touch with the people that public anger at social and economic conditions boiled over. That no longer seems to be the case.

The parliamentary system introduced in 2010 reduces the power of the president as the single centre of power. Now there are several centres, and even the strengthened legislature does not make a valid target. Tashiev’s call to seize power was an abstract notion – did he mean overthrowing parliament, of which he is a sitting member, the president, the government or all three? It was not coherent enough for people to take it seriously.

Tashiev’s actions fit into a broader pattern of behaviour. Whenever he has felt ignored by the authorities, his default position has been to call his supporters out into the streets. This spring, his party was behind protests in the south of the country, which were really about Tashiev trying to get the government of then prime minister Omurbek Babanov to award posts to members of his party. In an interview he gave at the time, he said protests were his way of putting pressure on the government – but not an attempt to stage a revolution.

The issue Tashiev picked on this time was the Kumtor mine, and specifically the government’s “unpatriotic” refusal to nationalise it. In a vote this summer, most members of parliament supported the cabinet’s position.

The contract with Centerra may not be the best possible, and environmental concerns about the mine do need to be looked at. But that does not mean nationalisation is the answer. Those calling for have failed to explain how it would bring in more profits than now, when the state has a 30 per cent holding in the mine.

In the politics of Kyrgyzstan, it remains difficult to draw a distinction between personal political ambition and sloganeering, and genuine expressions of public discontent, albeit exploited by particular interest groups.

When Tashiev’s right hand man Japarov announced early on in the October 3 rally that this was not about scoring political points, but was instead about real social and economic issues, it might have seemed for a moment that the party had moved on from personality-based politics. But the ensuing events put an end to any such ideas, as indeed it did for the image he has tried to project of a mature, considered politician.

Asel Doolotkeldieva comes from Kyrgyzstan and is a PhD student at the University of Exeter.