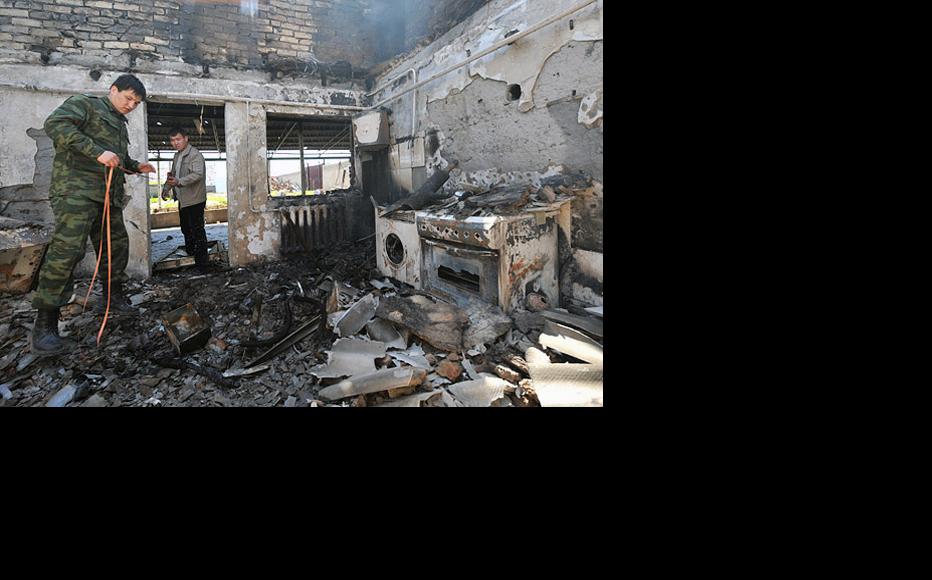 Homes in Mayevka were gutted by fire during the violence. Photo by Anara Yusupova. 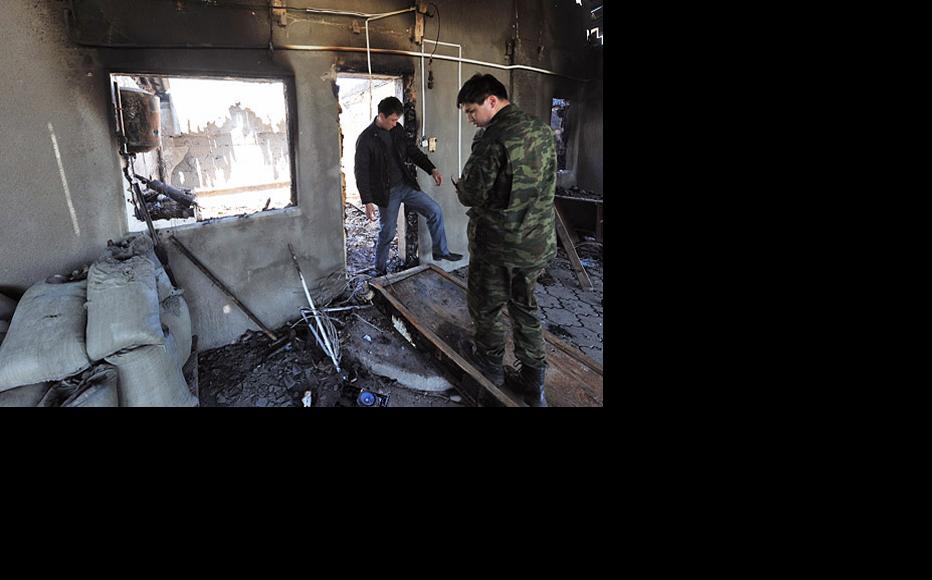 Homes in Mayevka were gutted by fire during the violence. Photo by Asyl Osmonalieva.
The link has been copied

The new government in Kyrgyzstan is under pressure to restore law and order after violent clashes over land near the capital Bishkek.

Although the land invasions are an anarchic free-for-all driven by genuine grievances, some analysts suspect there is a degree of coordination, possibly by diehard opponents of the new regime.

The Kyrgyz interior ministry said five people died and 40 were injured on April 19 as police battled several hundred people who had seized land around the village of Mayevka, on the northern outskirts of Bishkek.

Such land grabs, generally by migrant populations seeking a better life close to the capital, have been a recurring feature of post-independence Kyrgyzstan, especially at moments of political turbulence. The latest wave was set off by the mass protests in Bishkek on April 6-7 when President Kurmanbek Bakiev was toppled and the opposition took over to form a new interim government.

Thousands of people marked out pieces of land they wanted to take over in areas around the capital, despite warnings from the new government that action would be taken to stop them.

In Mayevka, incomers staked out plots and then set off en masse towards the centre of Bishkek to demand recognition for their claims.

Acting city mayor Isa Omurkulov, who went to meet the marchers, said afterwards that he had promised them only that the land issue would be discussed by municipal officials. He told IWPR, “There is no free land within the city perimeter. As for private property and agricultural land, we won’t allow anyone to grab it.”

When the would-be squatters returned to Mayevka, violence erupted between them and the village’s residents, who were alarmed at the invasion of their home territory.

The village, several kilometres outside Bishkek, is home to ethnic Kyrgyz, Russians and Meskhetian Turks, a community which Stalin deported from the Caucasus to Central Asia during the Second World War.

An IWPR reporter who visited Mayevka after the violence saw smoke still hanging over the village, burnt-out houses and outbuildings, and cars gutted by fire.

One resident, a Turkish woman whose house was among those attacked by the raiders, said they justified their actions by claiming they had been part of the protests that ousted Bakiev, and now they wanted payback.

She recalled that they said of the new administration, “We gave you the White House [seat of government] – now you give us land!”

Like this woman, other villagers interviewed by IWPR were still in a state of shock. While the invaders were ethnic Kyrgyz, the residents believed they were targeted indiscriminately, regardless of their ethnicity.

“I am not scared of living among Kyrgyz people,” said one Russian from the village. “We have lived peaceably for many, many years. But I am now filled with apprehension about living in Kyrgyzstan.”

Police were sent in the same evening to quell the violence, assisted by the “Patriots”, a volunteer civilian force, and arrested more than 100 people. They say order has now been restored.

The following day, April 20, there was another outbreak of land seizures, but this time the action went off peacefully. A group of people, including families with children and elderly people, marked out plots of land with ropes, and set up tents to underline their intention to stay. No violence was reported.

Mayor Omurkulov told IWPR that the area claimed by the would-be settlers was greenbelt land, but that the authorities planned to develop it and build affordable, multi-storey apartments.

The day after the violence in Mayevka, interim prime minister Roza Otunbaeva issued a statement saying that law-enforcement agencies had orders to ensure public security, protect lives and prevent attacks on homes and other private property, as well as on facilities such as military bases. She warned that police were under instructions to open fire on anyone committing such offences.

Interior ministry spokesman Rahmatullo Ahmedov said investigations were under way to establish the causes and circumstances of the violence, and to identify and detain ringleaders and other participants.

Following the removal of Bakiev from power, the Kyrgyz police appeared to waver in their loyalties, especially with the appointment of a new interior minister.

Hinting at this, Bishkek’s mayor insisted that “the law enforcement agencies that were demoralised during the events of April are now capable of protecting the public”.

Residents of Leninskoye, a village near Mayevka, were less convinced that the police would come to their aid in the event of a land invasion, and set up their own self-defence units after spotting some people in their fields.

“We will not let them take our land,” said a resident, who did not want to give her name, adding that Leninskoye was relying on its own resources as police had only arrived in Mayevka late in the day.

In Jalalabad in the south of the country, Bakiev supporters who invaded local government offices and a television station earlier in the week again clashed with police on April 21. There are some suspicions that the land invasions have been covertly encouraged and even coordinated by opponents of the new government.

“The actions of those who are grabbing land are being skilfully coordinated,” said Omurkulov. “If that were not so, ordinary people coming from outside Bishkek would not be aware of where land plots exist.”

One of the volunteers from the Patriot force which went into Mayevka to support the police said that while the land claims were based on genuine hardship, someone seemed to be organising those involved.

“The land raiders are mainly young people aged between 15 and 25. We managed to talk to them, and many of them had come from other places and are working in the city. They really don’t have homes of their own - they either rent accommodation or live with relatives,” said the volunteer, Erlan Jusupov. “But some of the young people told us they wouldn’t have resorted to such extreme measures if their actions hadn’t been organised.

“The land grab is being managed by certain individuals. They [protesters] are being fed and given alcohol; we could see many of them were intoxicated. I believe that this confrontation has been organised so as to provoke a forceful response and to suggest that the new authorities are not in control of the situation, and also that they’re capable of spilling blood [as the Bakiev administration is accused of doing]. The ethnic factor is an additional thing, once again designed to attract attention.”

Tatiana Vygovskaya, a conflict studies expert and director of an NGO called Égalité, said the land clashes were really about economics, despite the “ethnic colouring” they had acquired.

“There is no such thing as ethnic conflict per se,” she said. “Conflicts are always centred around wealth that’s in short supply. The main motivation for those who went off to smash up homes was this – ‘You have everything, we have nothing. There’s been a revolution so now we’re going to take it all.’ Ethnicity comes into play only when there’s a public perception that one ethnic group has more wealth than another.”

News headlines about ethnic strife present a real challenge to the new government as it struggles to win credibility abroad as well at home.
The day after the Mayevka clashes, Russian president Dmitry Medvedev – who has been generally supportive of Kyrgyzstan’s new rulers - ordered his defense minister to protect Russian citizens and property in the Central Asian state. It was unclear precisely from his statement precisely what steps the Russian military – which has an airbase in Kyrgyzstan – might take.
Although the Meskhetian Turks do not originate from Turkey, that country has also indicated its concern for their safety. Ambassador Nejat Akcal visited Mayevka, and his embassy is to provide humanitarian aid to the village.

Despite allegations of covert political backing for the land invasions, local analysts agree that the fundamental issues are real.

A young man who was among those who invaded Mayevka told IWPR their actions were justified.

“It’s really simple – all they have to do is give people land plots and the conflict will be over. We don’t understand why they won’t give us land,” he said.

He argued that similar land seizures that followed the 2005 “Tulip Revolution”, which brought Bakiev to power, had proved a success for those who carried them out. “Since the land plots that were seized after 2005 were later made legal, that means our land will become legal as well, anyway,” he said.

The head of Kyrgyzstan’s Communist Party Iskhak Masaliev, who has been appointed speaker of parliament, said the history of illegal land grabs dates back to around 1990, shortly before the country became independent.

“It’s become a bad tradition to grab land after every change of regime,” he said.

Apart from the legal issues, Masaliev sees the growth of squatter settlements as the wrong direction, as in his view urban centres should grow upwards with more high-rise blocks, rather than outwards.

“Hastily-built settlements aggravate the problems of poverty and crime, as the conditions in which people live in these new settlements are appalling – no roads, no communications, and no running water,” he explained.

Gulnura Abazbekova, from the human rights ombudsman’s office, agreed that giving in and parcelling out more land to squatters would be wrong.

“This is barbaric – the land raiders have illegally seized the property and agricultural land of others, and it needs to be stopped resolutely,” she said. “Most of them are young people with no stable income. Even if they were given land, they wouldn’t be able to build anything on it, they don’t have the funds. There’s no electricity or road there, and the city cannot shoulder this burden.”

Vygovskaya agreed that the new authorities should take stern measures to suppress such behaviour. “The mob needs to know there’s a deterrent,” she added.

She predicts more unrest of a similar nature in the months to come.

“Any violent change of regime entails lawlessness, violence and aggression,” she said.

“Since the situation basically isn’t entirely under the authorities’ control, outbreaks of conflict like the one in Mayevka may continue for a long time. Over the next six months, they will break out in one place or another all the time. But of course, Bishkek is the main target for land seizures, because people think that everyone in Bishkek is well-off, and the mere fact of living there makes life better.”