Protesters try to stop documentary about imprisoned activist being shown. 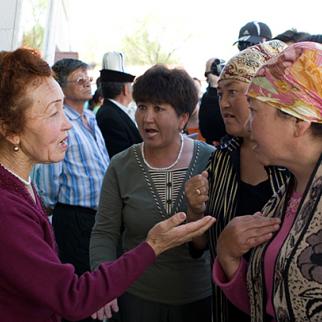 Confrontation between a female opposition activist and a group of pro-government demonstrators in 2009. (Photo: Timur Rayimkulov; courtesy of Kloop.kg)

In Kyrgyzstan and Uzbekistan, police and politicians recruit women as professional campaigners or just as troublemakers.

Protesters try to stop documentary about imprisoned activist being shown.

A documentary about a jailed ethnic Uzbek activist in Kyrgyzstan sparked controversy when organisers of Central Asia’ s only human rights film festival screened it in Bishkek last month.

Produced by the rights group Freedom House and directed by Abdurahmon Aripov, the short film tells the story of Azimjon Askarov, a rights defender who in 2002 founded an NGO called Vozdukh (Air) to investigate cases police brutality.

Askarov was sentenced to life imprisonment in 2010 after being charged with organising mass unrest and murdering a policeman during the ethnic violence in southern Kyrgyzstan in June that year. International human rights organisations questioned the fairness of his trial, and Amnesty International has recognised him as a prisoner of conscience.

The 15-minute documentary was among more than 30 international and local films focusing on human rights issues selected for the Bir Duyno, or One World, festival, now in its seventh year.

Organised by the Bir Duyno NGO led by well-known civil society activist Tolekan Ismailova, the festival launched in Bishkek on 18-24 September and was then due to travel to other parts of Kyrgyzstan in October.

But the controversy that erupted around the Askarov documentary means the festival will not now tour until November, even though the film is not among those scheduled to be shown on the regional tour.

What appeared to be an organised campaign to prevent the screening of the film began on the first day of the festival, when a group of lawyers and political analysts held a press conference at which they claimed it would inflame ethnic tensions.

“It has not been long since the conflict of 2010, so this film revives the sense of hurt felt by victims and provokes ethnic tension,” said political scientist Jolbors Jorobekov, adding that the documentary was “one-sided” and that it questioned the legal system of Kyrgyzstan and the verdict against Askarov.

The following day, half-a-dozen women tried to disrupt a session where festival judges were viewing entries, and demanded that the screening of the Askarov film be cancelled.

When Bir Duyno head Ismailova came to talk to them, they insulted her and the festival organisers until police officers and cinema security guards escorted them out of the building.

There was also an attempt to disrupt the sole screening of the film on September 21 when a group of young men entered the cinema, threatening audience members and trying to push them out. The screening went ahead after police ejected the protestors.

Some observers said the protests looked like the rent-a-mob tactics widely employed in Kyrgyzstan, where groups of women and young people are paid to stage apparently spontaneous protests.

The leader of the Erkin El youth movement, Mavlen Askarbekov said his group had not taken part in the Bishkek protests but was closely involved in the campaign to prevent the films being seen elsewhere.

He insisted that those who disrupted the festival were not demonstrators for hire, but simply people opposed to the “instability” created by such films.

Although Askarbekov admitted he had not seen the film itself, he told IWPR that he objected to the portrayal of Askarov as an innocent man and criticised the festival for focusing on topics that showed Kyrgyzstan in a bad light.

Askat Dukenbaev, Freedom House’s project director in Kyrgyzstan, said his organisation decided to make a documentary about Askarov because he had been tried and convicted without due process, and because demands for the case to be re-opened had been ignored.

“We realise that the people protesting against the film – women or young people – may have never seen the film, and are being used as tools in the hands of others,” Dukenbaev said.

Film festival coordinator Gulbarchyn Jakybova said the panel of judges selected films that reflected human rights problems both in Kyrgyzstan and around the world, without prejudice or bias.

“We realise that since we touch on the sensitive issue of human rights violations, our films are not going to be liked by everyone,” she added.

Dukenbaev said controversial films like the one about Askarov needed to be aired even if there were objections to raising sensitive issues of ethnic strife.

“We can't just be silent about it until the next bloody conflict,” he said, adding, “Now the Uzbek minority is just staying silent, and those with radical views among the Kyrgyz majority are reacting so violently to any attempts to prompt a public debate about ethnic relations in our country, a discussion we are badly in need of.”

The human rights film festival is no stranger to controversy. Last year, trouble erupted over the plan to screen “I Am Gay and Muslim”, a movie by director Chris Belloni telling the story of young Moroccan men exploring their religious and sexual identity.

A Kyrgyz court banned it from being shown following protests, a decision some observers felt was prompted by the worldwide unrest about the controversial film “Innocence of Muslims” which appeared on the internet last summer.

In 2010, the Kyrgyz authorities banned “Ten Conditions of Love” by Jeff Daniels, a film about Rebiya Kadeer, leader of an ethnic Uighur émigré movement. That decision may have been prompted by Bishkek’s desire to avoid antagonising China, its biggest investor and trading partner, which maintains tight control over the Uighur population in the northwest province of Xinjiang.