Young men who once took up weapons to fight Saddam now find other ways of asserting their manhood.

Young men who once took up weapons to fight Saddam now find other ways of asserting their manhood. 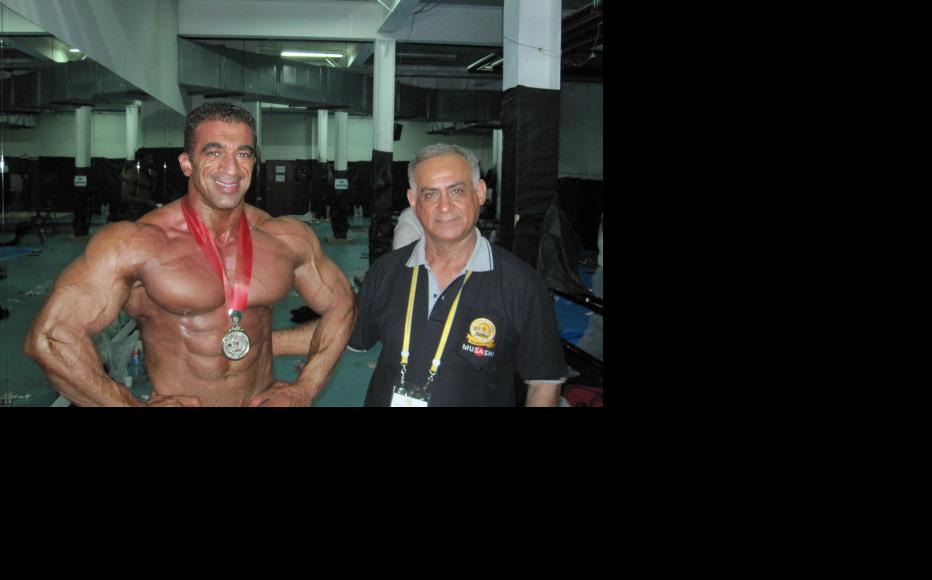 Ahmed Majeed, better known as Ahmed Rambo, is Kurdistan’s most famous bodybuilder. (Photo by Ahmed Majeed)
The link has been copied

Young Kurdish men’s growing preoccupation with physical fitness and bodybuilding is fueling an explosion of gyms in the region, from gleaming, state-of-the-art health centres to clunky, alleyway weight rooms.

Most observers agree that the influence of western sport and culture and the growing idleness of young men, who in the past might have swelled the ranks of the Kurdish Peshmerga militia, is driving the fitness trend in Iraqi Kurdistan.

Just two decades ago there were only three gyms in the region. Today, by most estimates, there are at least 200 and the managers of the biggest ones in Erbil and Sulaimaniyah say their memberships have soared by more than 70 per cent in the last three years.

“Kurdish men now see gyms as a substitute for military training. I teach this new generation many of the good things I learned in the military, including bench presses, squats and other exercises. In the end, you view yourself in a different way. This is happening all over Kurdistan,” said Burhan Ali Joma, the head of the Kurdistan Bodybuilding Federation who opened Erbil Clubhouse Gym, the region’s first weight-lifting facility, in 1970.

These days, street corners and building facades in Sulaimaniyah and Erbil are plastered with competing advertisements for fitness centres. The facilities vary greatly but the larger ones are state-of-the-art, boasting floor-to-ceiling mirrors and cutting-edge equipment from Germany.

“People come to gyms because exercise is healthy. Some want to stay fit, some are sick and have been encouraged to exercise to stay healthy, and some want to build muscle. A lot of the new members are university students who want to make themselves stronger and more attractive,” Joma said.

The new gym culture has not been lost on the government or the women of Iraqi Kurdistan. Sherdil Tahsin, head of the Kurdistan parliament’s ten-member sports committee, said the regional authorities’ new budget includes ten billion dinars (8.4 million US dollars) for the development of sports facilities. He said the government was taking into account the popularity of gyms as the committee looks to allocate its resources.

Gyms specifically for women are also on the rise, and some premises now block off certain hours for female-only exercise.

Sarween Ahmed, 42, said she has lost five kilogrammes since she started working out at a women’s gym in the Azadi neighbourhood of Erbil two months ago.

Ahmed Majeed, better known as Ahmed Rambo, is Kurdistan’s most famous bodybuilder. His rise to fame is an apt illustration of how the sport has outgrown its poor reputation during his lifetime.

Majeed, 37, began lifting weights in 1988. He didn’t tell his parents who had taken a dim view of the sport, regarding it as alien to Kurdish culture and tradition. Within two years, Majeed had won gold in the Iraqi Bodybuilding Championships in the 75 kilo category.

By this time, he had earned his nickname for resembling Sylvester Stallone and wearing bandanas on his head like the American actor’s Rambo character.

“As I became famous, I could no longer hide that I went to the gym every day. My father was mad at me and told me that I lost my manhood because I shaved my mustache like Rambo. I asked him if he thought all westerners lost their manhood when they shaved their beards and mustaches,” Majeed said.

Majeed left Iraqi Kurdistan in 1995 to escape the bitter Kurdish civil war, but continued to compete successfully in Germany. He returned in 2004, and led a group of Kurdish bodybuilders to the 2009 Asian Bodybuilding Championships in Thailand.

The Iraqi team did well, with Majeed winning a silver medal and Nazr Ahmed taking a gold in the 85 kg category, while Sardar Esmaeel and Adel Kamal won silvers in the 85 and 75 kg categories respectively.

“This is a good time for Kurdistan. We have some good bodybuilders who I am sure can be great stars if they get financial support so they can stop working regular jobs to make a living. If the Kurdish government builds and expand gyms, the sport will become even more popular,” Majeed said.

But the rapid growth of the fitness industry has left some health experts worried about people abusing their bodies.

Nawzhin Bakhtear Salih, 33, who has opened four gyms in Sulaimaniyah, most recently the Big Zone, and claims he has enrolled roughly 4,000 members in four years, believes very few weight trainers or gym owners have proper backgrounds in health education.

“People come to my gyms and think [that having] big muscles [means you’re] fitness. They don’t diet, some smoke and drink, and they don’t understand the right techniques for training,” said Salih, who has a Masters degree in physical education and also teaches at Sulaimaniyah University.

In addition, Salih believes, along with Joma, that illegal steroids are readily available on the black market. In interviews with local media, Joma has told of scuffles with steroid-users he has been forced to throw out of his gym in Erbil.

Nonetheless, Salih said the gym craze is here to stay - warts ‘n all – and its growing popularity is easy to understand. “It’s natural for young men to want big arms and be able to wear hip clothes,” Salih said. “They want to impress girls.”

Zakaria Muhammad is an IWPR-trained journalist in Erbil. This story was edited by Iraqi Crisis Report editor Charles McDermid.