Despite Uhuru Kenyatta’s comments, critics say a series of new laws generated by government is designed to curtail freedoms, not increase them.

Despite Uhuru Kenyatta’s comments, critics say a series of new laws generated by government is designed to curtail freedoms, not increase them. 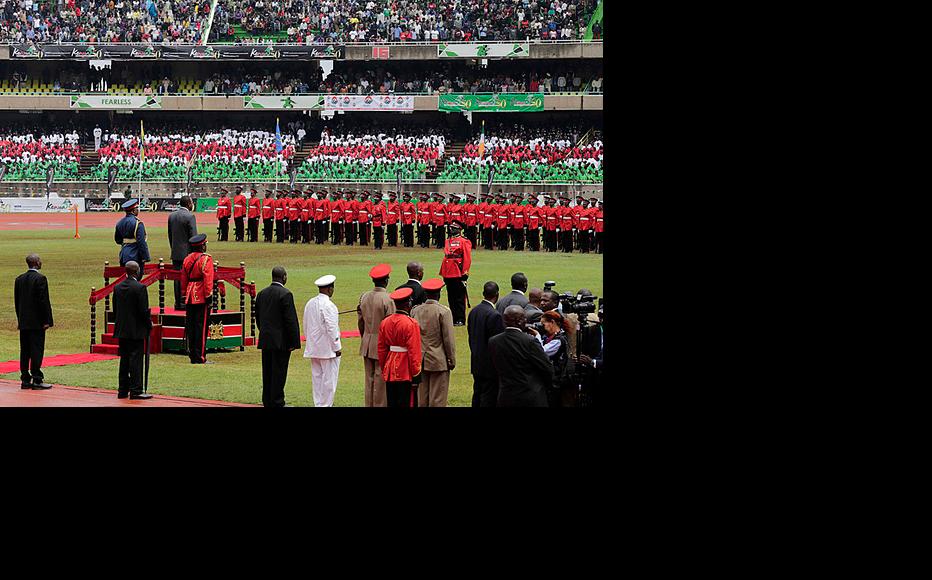 Kenya Independence Day celebrations. Despite President Uhuru Kenyatta’s comments, critics say a series of new laws generated by government is designed to curtail freedoms, not increase them. (Photo: Sudath Silva, courtesy of President Rajapaksa)
The link has been copied

Amid growing fears of a clampdown on basic freedoms in Kenya, President Uhuru Kenyatta used a speech marking 50 years of independence to pledge his support for human rights.

Kenyatta was speaking at a ceremony on December 12 as Kenya celebrated half a decade since the end of British colonial rule.

The ceremony, held at the Safaricom Stadium in Kasarani on the outskirts of Nairobi, was attended by 14 heads of state, mainly from Africa, as well as envoys and dignitaries from across the world.

“Although human rights are fundamental and inalienable, they still need to be protected and defended,” Kenyatta said. “Let us all reflect on the value of our freedom and sovereignty, and commit ourselves to always defend them.”

In recent weeks, the Kenyan government has come in for criticism because of proposed laws that could heavily restrict the media and civil society organisations. (See New Kenyan Laws "Undermine Freedoms" on these bills.)

Since the tribunal is able to act on anonymous complaints, journalists or organisations would be unable to identify their accusers, opening up the possibility of abuse.

Another law, the Media Council Bill, has yet to be debated in parliament. Campaign groups like the New York-based Human Rights Watch have warned that if this bill is passed, it could open the door to government censorship.

“There is no question: these laws severely impinge on freedom of expression which is protected under the new Kenyan constitution,” the group said in a statement on December 9. “The president should reject these laws in their current form.”

Media houses, through the Kenya Editors Guild, intend to file a legal challenge to the constitutionality of the new laws.

“The laws are oppressive and only meant to kill media freedom in this country. We will challenge them to the end,” David Ohito, the guild’s deputy chairman who led street protests over the new laws, said.

Another proposed law regulating non-government groups failed to gain support in parliament after it was deemed unconstitutional.

The government’s commitment to human rights has also been questioned in other areas.

In May, the Truth Justice and Reconciliation Commission, TJRC, released its report into historical injustices in Kenya since independence in. 1963. Despite the strict time-lines outlined in the final report, none of the TJRC’s recommendations has been acted upon.

Furthermore, parliament has passed another law allowing legislators to alter the content of the report, prompting claims that the government is undermining the TJRC’s work and ignoring crucial findings.

“The new regime has this approach of not being very comfortable with human rights questions,” Chris Gitari of the International Centre for Transitional Justice in Nairobi told IWPR.

Gitari said the government’s attitude to human rights amounted to “an ‘accept and move on’ type of policy”.

Rights groups have also criticised proposed amendments to laws governing the way the police operate. The changes would give the executive greater powers over the force and limit independent oversight of its activities. If adopted, they would broaden the range of circumstances in which police are allowed to use lethal force, so that this would be possible to protecting property or prevent an individual charged with a serious offence from absconding.

Kenya’s police have been widely criticised for using excessive force and have been accused of a number of extra-judicial killings.

According to the Commission of Inquiry into Post-Election Violence, the body that investigated atrocities committed during the unrest that followed the disputed 2007 presidential election, police officers killed more than 400 of the approximately 1,100 people who died.

Kenyatta, his deputy William Ruto, and journalist Joshua Arap Sang are charged at the International Criminal Court with planning and financing the chaos.

Ruto and Sang’s started in September but adjourned last month until January. Kenyatta’s trial is set to get under way on February 5, 2014.
The police have also been accused of heavy-handedness in their efforts to stamp out threats posed by Islamic extremists, particularly in the coastal city of Mombasa. (See Kenyan Muslims Worried by Tough Policing Methods.)

Human Rights Watch said there was “a common thread” to the new laws.

“All of them would return power to the executive branch and reduce the powers of the independent oversight mechanisms designed to limit presidential power and improve accountability,” the group said. “These initiatives look suspiciously like an effort to return Kenya to the system where authority is not accountable for rights abuses, as was the norm in the country’s first four decades.”

In his speech, Kenyatta also pledged to unite the country’s 42 ethnic groups, members of some of which took up arms against one another during the 2007-08 electoral violence.

When Kenyatta and Ruto were elected in March this year, many hailed it as a sign that ethnic tensions in the country had subsided. Kenyatta is Kikuyu while Ruto is from the Kalenjin group – communities that were on opposing sides in the 2007 bloodshed.

But in some areas, particularly in the Rift Valley which saw some of the worst violence, animosities still run deep. (See Old Tensions Persist in Kenya's Rift Valley.)

“Our shared aim is to end meaningless ethnic tensions and rivalry and to unite all our citizens,” Kenyatta said. “I am determined to provide leadership towards the attainment of this noble objective.

“Kenya is not a collection of 42 tribes who have to live together. Kenya is one nation, assembled by divine providence and held together for the last 50 years by our common will and belief in a collective brighter future for our children, our future generations, and ourselves.”