But legal experts are divided on whether judges will apply the new rules, and what the consequences for international justice will be.

But legal experts are divided on whether judges will apply the new rules, and what the consequences for international justice will be. 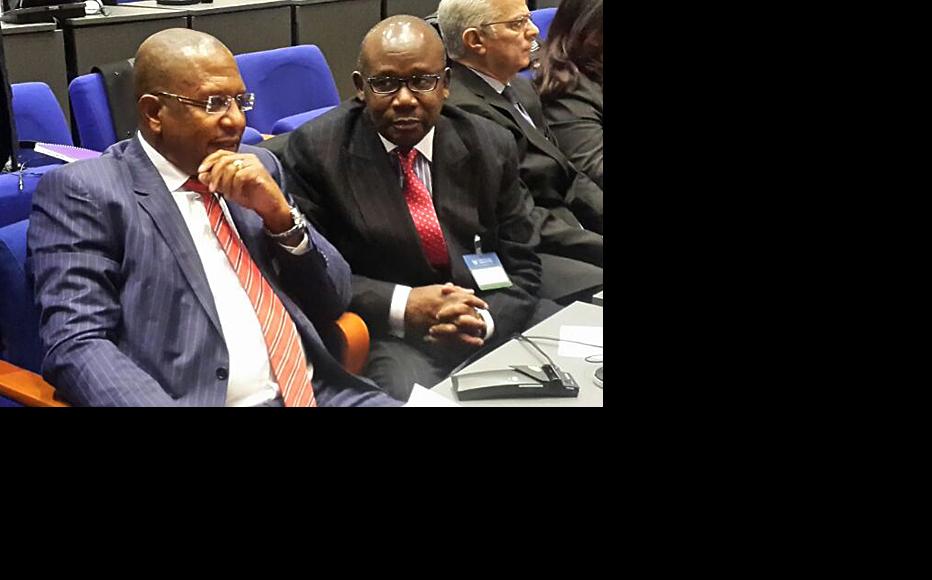 Kenya's director of public prosecutions, Keriako Tobiko, and attorney general, Githu Muigai, at the Assembly of States Parties meeting in The Hague last month. (Photo: Capital FM, Kenya)
The link has been copied

The Kenyan government has welcomed changes to the rules governing the International Criminal Court (ICC) that could enable state officials to skip trial proceedings.

The changes were made late last month after Kenyan officials travelled to The Hague for a meeting of all 122 ICC states – known as the Assembly of States Parties (ASP) – seeking concessions for President Uhuru Kenyatta before he goes on trial next year.

Observers of international justice are divided on the likely impact of the new rules on Kenyatta’s case, and that against Kenyan deputy president William Ruto.

One of the new rules passed by the ASP allows defendants who have “extraordinary public duties at the highest national level” and who are not the subject of an arrest warrant to ask judges for leave of absence from their trial, so that they are represented instead by their lawyers.

A second rule change allows a defendant who needs to attend under a “summons to appear” to follow trial proceedings via video-link rather than be physically present in the courtroom.

The annual ASP conference, was held in The Hague from November 19 to 28, agreed the two rule changes following intense lobbying by the Kenyan delegation.

In recent weeks, the Kenyan government has repeatedly voiced fears that Kenyatta’s scheduled absence from his official duties in Nairobi could destabilise Kenya and the wider East Africa region.

“It was a great achievement we achieved, and now our president and his deputy will have sufficient time to perform their constitutional mandate back home,” Foreign Minister Amina Mohamed said as the week-long ASP meeting drew to a close.

Kenyatta and Ruto are facing trial at the ICC in two separate cases on charges of planning and financing the violence that hit Kenya following a disputed presidential election in December 2007. A third suspect, Joshua Arap Sang, is standing trial with Ruto in proceedings that started in September this year. Kenyatta’s case is slated for February 5, 2014.

Two months of bloodshed in late 2007 and early 2008 left more than 1,100 Kenyans dead and over half a million others homeless. The suspects are charged with murder, persecution and forcible population displacement. Kenyatta is also charged with rape, as an indirect perpetration.

The amendments to the rules were a culmination of pressure from the African Union (AU) and the Kenyan government, which have arguably left no stone unturned in their efforts to shield Kenyatta from trial.

Last month, the United Nations Security Council rejected Kenya’s request to delay the trial by a year on the grounds of international security. Subsequently, the Kenyan government has sought legal immunity for Kenyatta as a sitting head of state.

While the debate on immunity could continue well into next year, the new rules agreed by the ASP mean that Kenyatta may not have to physically present in the courtroom once proceedings against him get under way.

If the judges agree to this, he could be represented solely by his lawyers, or he could follow proceedings from Kenya via video-link.

The United States permanent representative to the UN, Samantha Power, was among those who welcomed the compromise.

“Earlier this month, when the issue [of Kenyatta’s trial] came before the United Nations Security Council, I encouraged Kenya and the African Union to work within the framework of the Assembly of States Parties to enable the proceedings to be conducted in a manner that would not make the Kenyan defendants choose between mounting a vigorous legal defence and continuing to do their jobs,” Power said.

The rule changes follow a decision by appeals judges in the Ruto case in October which overturned an earlier ruling by trial judges that the deputy president could miss large portions of the proceedings. Appeals judges decided that Ruto could miss proceedings only in “exceptional circumstances”. Judges in the Kenyatta case subsequently adopted the same criteria for his case.

Although the new rules were approved by the states that back the ICC, justice experts say it is still up to the judges whether they will apply them, and if so, how.

Some experts predict that it will be very difficult for judges to apply the rules because they appear to contradict a provision in the ICC’s founding treaty, the Rome Statute. Article 63 (1) of the statute stipulates that defendants “shall be present during the trial”.

The Rome Statute has primacy over the court’s rules and procedures.

Other experts take a different view. Dov Jacobs, assistant professor of law at Leiden University, told IWPR that in previous decisions, both the trial and appeals chambers have applied a liberal interpretation of the provision that requires a defendant’s presence.

“Given the fact that judges have already opened the door for interpreting [the Rome Statute provision] as not always requiring presence at trial, then I think they would be under an obligation to interpret this in light of [the new rules],” Jacobs said.

Jacobs said it would be “very strange” if either set of judges ruled that the new rules could not be applied on the grounds that they were contrary to the Rome Statute.

“They have themselves have not respected Article 63 (1) in their own case law,” he argued.

Aside from what is written in the Rome Statute, a bigger issue for Kenyatta and Ruto could be that the new rules appear to conflict with the earlier standard for absence set out by the appeals chamber in Ruto’s case.

Unlike the appeals judges’ decision, the new rule makes a distinction between the treatment of defendants who serve as senior state officials and those who do not. This would appear to go against the Rome Statute principle that ICC rules apply “equally to all persons without any distinction based on official capacity”.

Kevin Jon Heller, a law professor at Melbourne University, argues that this discrepancy could lead judges not to apply the new rule to Kenyatta and Ruto.

While the appeals chamber did not apply a rigid interpretation to the requirement to be present at trial, it ruled that any absence should be limited to what is “strictly necessary”, and should only be granted after alternative solutions had been considered.

The appeals judges were also explicit about why a defendant should attend trial. The defendant, they said, is an “active participant” in the proceedings, and absence “would have a detrimental impact on the morale and participation of victims and witnesses”.

Furthermore, the judges said, the presence of the defendant contributes to “public confidence in the administration of justice”.
In this context, Heller predicted that given the chance, the appeals chamber will “almost certainly” limit the application of the new rule.

But others experts like Jacobs take a different view. Where Heller focuses on the reasoning applied by judges up to now, Jacobs argues that the rule changes make the judges’ earlier reasoning “irrelevant”.

Jacobs believes that since judges were initially quite sympathetic to Ruto and Kenyatta’s request, both trial and appeals judges are likely to apply the new rule.

“It should be recalled that both the trial chamber and the appeals chamber had decided not to apply Article 63(1) strictly, and to provide for exceptions,” Jacobs said. “They just disagreed on the scope of the exceptions. This disagreement has now been solved by the ASP and I think that the appeals chamber will have to follow that."

However judges at the ICC interpret the rules, experts are divided on whether Kenyatta and Ruto should be allowed to miss their trials.

Campaigners for judge like the New York-based advocacy group Human Rights Watch have expressed concern that the new rules might open up a channel for the ICC to discriminate between defendants according to whether they are important officials or ordinary citizens.

Conversely, Jacobs pointed to the balance that international justice constantly needs to strike between upholding the law and serving the interests of international relations.

He said it was “perfectly reasonable” to allow a defendant who is issued with a summons to appear, rather than with an arrest warrant, not to attend their trial.

“This is the reality of [international criminal law] and the context in which it operates,” Jacobs said. “I think we are making too much out of this.”