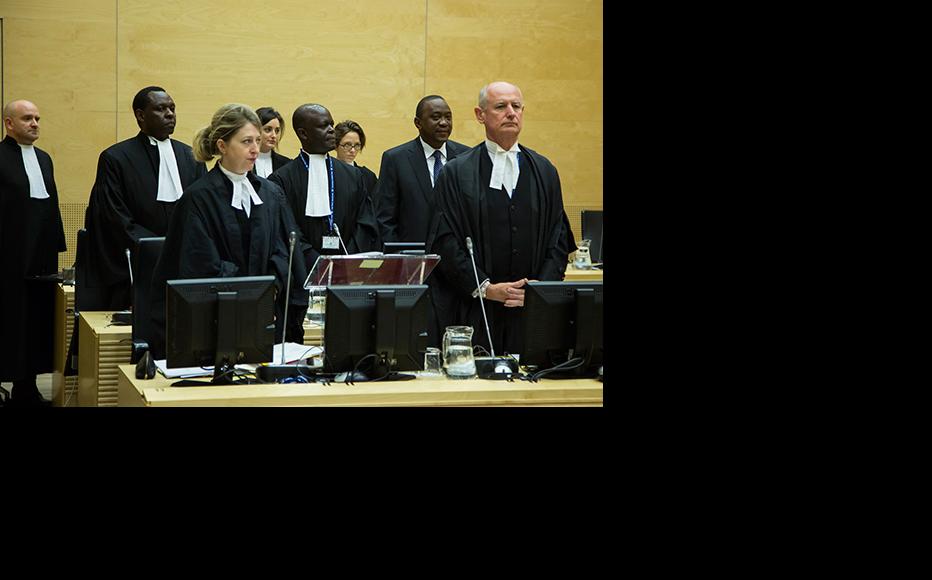 Defence of Mr Kenyatta at the beginning of the Status Conference. (Photo: ICC-CPI/Flickr)
The link has been copied

Prosecutors have asked judges at the International Criminal Court (ICC) not to terminate the case against Kenyan president Uhuru Kenyatta but instead adjourn proceedings until the authorities in Nairobi comply with their requests for evidence.

At a courtroom meeting in The Hague on October 8, prosecutors said they could not say when the government would provide access to the requested material. That made it impossible to schedule a firm date for the Kenyatta trial to begin.

Kenyatta is charged with orchestrating the bloodshed which followed a disputed presidential election result in December 2007. At least 1,100 people died and 650,000 others were forced from their homes in two months of violence.

Prosecutors accuse him of responsibility for five counts of crimes against humanity including murder, persecution, forcible population transfer and rape.

Kenyatta was in court for this week’s hearing – the first time he has been present at the ICC since he was elected president in March 2013.

Judges ordered him to appear, at what they called a “critical juncture” in the case.

Kenyatta is the first head of state to appear before the ICC.

The trial was meant to start on October 7, but last month, judges called this meeting instead after prosecutors asked for a postponement.

Following a six-month delay, the prosecution still does not have enough evidence to go to a full trial. (See ICC Prosecutor Wants More Time to Get Kenyatta Evidence.)

In March, judges ordered the Kenyan authorities to provide documents that the prosecution had requested in support of its case. (Kenyan President's Trial Adjourned Until October.)

In July, Kenyan attorney general Githu Muigai said there were obstacles preventing the government from providing much of the information. At the end of that month, judges issued a second decision in which they again directed Nairobi to comply.

At a separate court meeting held on October 7, prosecutors said there had been no further cooperation and the process was in “deadlock”. They argued that the court must ensure justice was done, and that states must comply with their legal obligations to the ICC.

At the October 8 meeting, the prosecution said the interests of justice outweighed other concerns such as Kenyatta’s right to a timely trial.

“We submit that it would be wholly inappropriate for a case to be withdrawn where there has been obstruction of the proper enquiries which the justice of the case required to be made,” Benjamin Gumpert, for the prosecution, said in court. “The interests of justice should be the most important consideration in Your Honours’ minds.”

Gumpert warned that withdrawing the case against Kenyatta at a time when the Kenyan government was obstructing investigations would send a message that uncooperative states can “torpedo the course of justice”.

“It would not be in the court’s interests to make a ruling effectively saying that if a country sticks out for long enough, obstructing proper enquiries being made by the prosecutor… then the case against that person the country wants to protect will go away,” Gumpert said.

At the October 7 meeting, Kenya’s attorney general responded to questions from judges about the extent of cooperation. Contrary to the prosecution’s allegations, Muigai said the government had complied with its requests for information.

He gave examples of letters sent from various government offices such as the tax and communication authorities and the land registry which detailed the information available.

Asked by judges about a one-month period in which the Kenyan government did not respond to emails from the prosecution, Muigai said he had been awaiting the required information before answering.

“The information started flowing back. As soon as it came back I sent it to the Office of the Prosecutor,” he said.

“If it is right that this court is satisfied that there is no explanation [or] proper excuse for this failure [of the government], it is a necessary step for this court to take to sanction that failure,” Gumpert said at the October 8 meeting, .

The prosecution said adjourning the trial for a fixed period was impossible since no one knew when it could proceed.

“The only realistic date is when the government of Kenya does what it is bound to do,” Gumpert said. “We don’t know when that date will be.”

Gumpert said that while he could not provide the legal justification for why judges should grant an indefinite adjournment, this should not prevent them from acting.

“Exceptional cases require the court to take exceptional measures,” he said. “The granting of an adjournment is something that is uncontroversially within the chamber’s power.”

The prosecution sought to demonstrate that while its case was not currently strong enough to go to trial, it still had “a considerable body of evidence” against Kenyatta. Gumpert summarised the testimony of nine witnesses who would testify against Kenyatta and implicate him in the violence of 2007-08.

During the meeting, the legal representative of victims in the case argued that as head of state, Kenyatta was himself responsible for the lack of cooperation from his government. Fergal Gaynor said the president could simply order his government to provide the missing information.

Kenyatta’s lawyer Steven Kay countered that his client could only be held responsible for the alleged non-compliance of the government if there was evidence that he had actively interfered in the investigation or in the provision of evidence. Prosecutors themselves said they had no such evidence.

Kenyatta’s legal team opposed any further adjournment of the case. Pointing to the lack of evidence against their client, they called for him to be acquitted. An acquittal – as opposed to a withdrawal of charges – would mean that he could not be tried for the same offences again in future.

Kay argued that when prosecutors asked for a delay last month, the trial had been about to begin. He said refusing his client an acquittal would be “an affront to common sense”, since “the first day of the trial didn’t actually happen”.

“The plug was pulled for the very reason that a trial could not take place,” he said.

Turning to the extent of the Kenyan government’s cooperation, Kay argued that it had taken “very active steps” to cooperate with ICC prosecutors and that – since the judges’ order in July – it had responded to prosecution requests.

He went on to argue that cooperation should not be measured simply by whether prosecutors now had the information they had asked for. Instead, he said, it was crucial to look at how prosecutors had framed its requests, the lengths to which various Kenyan institutions had gone to respond to them, and whether some of the requests could even be met.

“In our submission, this is a matter that this court should properly take into account – the nature of the response, what was requested, whether it was able to be performed and the answer that was given,” he said. “It wasn’t obstruction at all; it was the nature of the [prosecution] requests.”