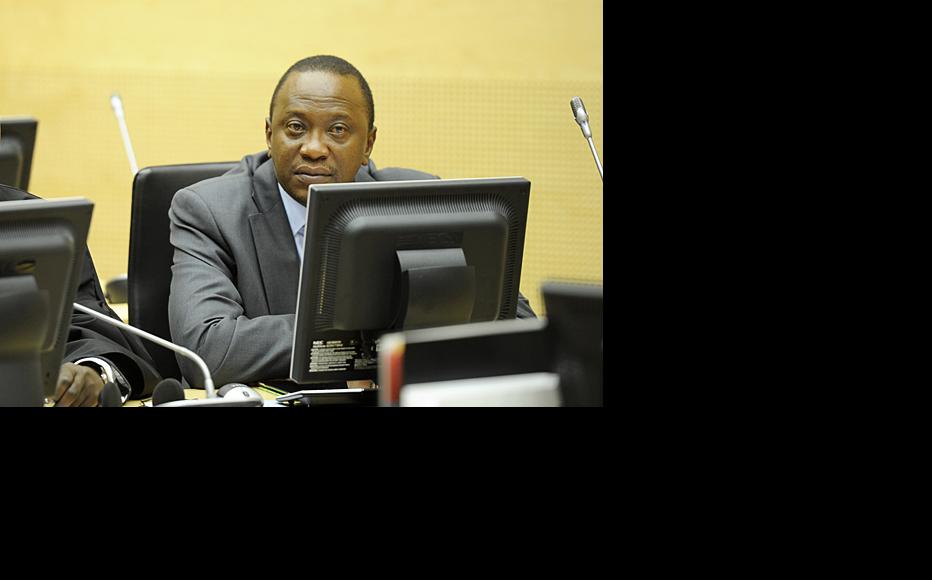 Judges rejected the request from Uhuru Kenyatta&#039;s lawyers to terminate his case at the ICC. (Photo: ICC-CPI/Flickr)
The link has been copied

The International Criminal Court (ICC) has adjourned the case against Kenya’s president, Uhuru Kenyatta, until October 7 this year, and ordered the country’s government to cooperate with prosecution requests for evidence.

In the decision, judges rejected arguments made by Kenyatta’s lawyers that the case should be thrown out altogether.

They stopped short of making a ruling on Prosecutor Fatou Bensouda’s application for a finding of non-cooperation against the Kenyan authorities, but did state that her investigation had been “unjustifiably frustrated”.

Kenyatta is charged with orchestrating the bloodshed which unfolded following a disputed presidential election result in December 2007. At least 1,100 people died and 650,000 others were forced from their homes in two months of violence.

Prosecutors accuse Kenyatta – who was elected president in March 2013 – of being an indirect co-perpetrator responsible for five counts of crimes against humanity including murder, persecution, forcible population transfer and rape.

All three deny the charges against them.

At the end of November, ICC prosecutors informed the court that the Kenyan government had failed to provide them with copies of Kenyatta’s financial records and other documents which they had requested back in April 2012. They asked judges to make a finding of non-compliance against the Kenyan government and report the matter to ICC signatory states, known as the Assembly of States Parties.

Prosecutors want to examine Kenyatta’s bank records as they are trying to prove that he armed assailants in the conflict and made large financial transactions around the time of the 2007 election.

In December, prosecutors informed the court that a key witness had recanted his testimony and that they no longer had enough evidence to put Kenyatta on trial. They asked for the proceedings to be delayed to allow them to conduct further investigations.

In January this year, judges postponed the trial, which had been due to start on February 5, until they had heard arguments from all parties in the case on how to proceed.

In their latest decision, issued on March 31, judges ruled out an unconditional adjournment but said a six-month delay was needed to give the Kenyan government an opportunity to hand over documents to the prosecution “on the basis that the records are relevant to a central allegation to the case”.

They ruled that the delay would not jeopardise Kenyatta’s rights, as he is at liberty and not the subject of an arrest warrant.

Judges also outlined a series of steps intended to ensure that the prosecution receives the records it has requested. They instructed prosecutors to send the Kenyan authorities an updated request with details of all the documents they need that are relevant to the charges. They further directed the Kenyan government to respond to the prosecution’s request within two weeks and to provide details of any factors that might prevent the disclosure of the requested material.

Besides financial records, prosecutors are seeking telephone records dating from the period of the post-election violence as well as access to individuals such as police officers who they believe could further their investigation. They also say the Kenyan government has failed to give them documents from various ministries, including those responsible for internal security, immigration and justice.

The judges asked for updates from both parties every two months.

Addressing the individual arguments made by the parties, judges said they would not rule on Bensouda’s submission that the Kenyan government had not cooperated with her investigations until October, leaving more time for this to happen. But they rejected the argument brought by the Kenyan government that it had facilitated the prosecution’s requests as far as it could.

Kenya’s attorney general, Githu Muigai, told ICC judges in February that the authorities were not obliged to respond to a request from the prosecution, only to a decision from the court’s judges. He said also said that under Kenyan law, it would take an order from a domestic court for Kenyatta’s financial records to be handed over.

ICC judges pointed out that contrary to their obligations, the Kenyan authorities had not promptly informed prosecutors of these barriers to fulfilling the April 2012 request. They did so only earlier this year. Judges concluded that there had been “a substantial unexplained delay” on the part of the Kenyan authorities either in providing assistance or in giving reasons for not doing so.

They also said that Kenya’s national laws were not relevant to the obligation imposed by the ICC’s Rome Statute to cooperate with the prosecution’s investigation.

“Any purported deficiency in domestic legal procedures [or interpretation thereof], cannot be raised as a shield to protect a state party from its obligation to cooperate with the court, or to undermine any application for non-compliance,” judges wrote.

In reaching their decision to delay the start of Kenyatta’s case, judges said that “under ordinary circumstances” they would not have done so.

They took note of the prosecution submission that there is only a slim chance the financial records will yield the necessary evidence, and that its prospects for securing alternative evidence are “minimal”.

Judges also took the prosecution to task over the way it has conducted its investigation in Kenya. They expressed “serious concerns” about the “timeliness and thoroughness” of its work, and said it had been well aware of serious challenges to the credibility of some of its key witnesses.

The prosecution’s witnesses have experienced unprecedented security concerns, and judges said the fact that Kenyatta was head of state had the potential to create an atmosphere “adverse” to their investigation.

But despite their criticisms of the Kenyan authorities and the prosecution, they ruled that they had a duty under the ICC’s mandate to request all the evidence necessary to determine the truth.

Judges scheduled a status conference for July 9 to hear an update on the consultations between the prosecution and the Kenyan government.