Truth commission laid out steps for resolving long-term grievances and bringing justice to victims, but nothing has been done to implement them.

Truth commission laid out steps for resolving long-term grievances and bringing justice to victims, but nothing has been done to implement them. 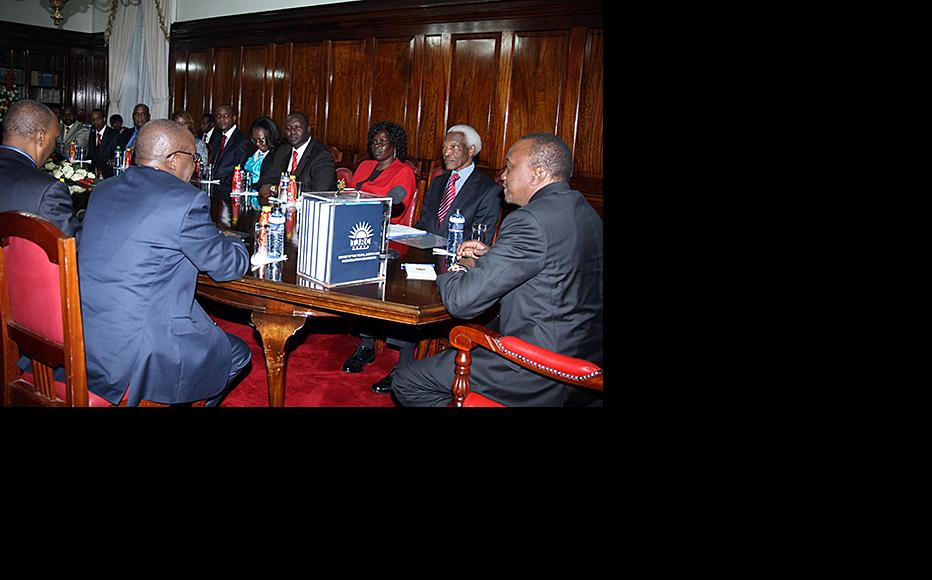 Truth, Justice and Reconciliation Commission report being presented to Kenya's President Uhuru Kenyatta. The truth commission laid out steps for resolving long-term grievances and bringing justice to victims, but nothing has been done to implement them. (Photo: Capital FM)
The link has been copied

The Kenyan government has been criticised for its apparent foot-dragging on implementing the recommendations made in a landmark report on human rights abuses stretching over nearly five decades.

Despite strict time-lines outlined in the final report by Kenya’s Truth, Justice and Reconciliation Commission, TJRC, released in May, none of the recommendations have been acted upon.

The TJRC was established by an act of parliament in 2008 to investigate serious human rights violations and other injustices dating from December 1963 to February 2008.

The commission was part of a peace agreement signed by both sides in the coalition government whose formation ended the political and ethnic violence that erupted after a December 2007 general election.

The truth commission was set up as part of a strategy to resolve some of the long-term grievances that led to the bloodshed.

The commission’s final report was published in the government’s Kenya Gazette on June 7. It was supposed to be tabled in parliament within 21 days of this official release date, but that has not happened. Nor has an implementation committee been established to report on progress every six months – all steps set out by the TJRC.

The lack of response has concerned those who want to see the new government that emerged from general elections this March take firm action on the findings.

“There is no political will at all. Already there are reports of plans to have the report amended through parliament,” Getrude Angote, executive director of the Nairobi-based rights group Kituo Cha Sheria said. “It means there are people who are not happy with it when we are supposed to be talking about implementation.”

Angote was referring to a bill tabled on August 6 that, if passed, would enable legislators to debate and change sections of the TJRC’s final report.

Among those waiting eagerly to hear the TRJC’s conclusions were the families of the victims of several high-profile political assassinations carried out since Kenyan independence in 1963, which were investigated in the report.

“All I want is justice – justice for the death of my husband,” Margaret Mbai, the widow of political activist Crispin Odhiambo Mbai, told IWPR.

Mbai was a distinguished professor at the University of Nairobi who was killed at the height of a constitutional reform process in September 2003.

“The question of who, and why, should be answered for our family to get justice,” Margaret Mbai said. “That is all we want.”

According to the TJRC report, Mbai was killed after three gunmen walked into his house in a suburb of Nairobi and opened fire.

“My husband was left lying there in a pool of blood,” his widow recalled. “He was later rushed to hospital by neighbours who responded to the sound of gun shots, but he succumbed to [his] injuries.”

The report found that Mbai was assassinated because of his political views as chairman of a national committee on devolution, a controversial constitutional issue at the time. It concluded that the government had been “either unable or unwilling” to take further steps to investigate his death.

According to the report, Mbai’s murder was one of several since Kenyan independence that amounted to a pattern of killing people seen as presenting a political threat.

Despite the buoyant mood that surrounded a change of leadership in the early 2000s, Mbai’s death “underscores the reality that political assassination continues to be viewed as a legitimate tool of resolving political differences”, the report concludes. “The death of Mbai was unexpected, coming at a time of great optimism for Kenya: the coming to power of the [Mwai] Kibaki government which was accompanied by reformist optimism.”

Margaret Mbai is certain her husband’s murder was carefully planned.

“My husband was killed with a motive,” she said. "People must have been sent to kill him because one of them gave that confession, although it was not admissible in court because it was not taken before a magistrate.”

The TJRC report singles out a former member of parliament, Norman Nyaga – a neighbour of the deceased man – as deserving further investigation.

Soon after the report was released, Nyaga dismissed suggestions he was in any way involved in Mbai’s death.

“The biggest crime that I did was to actually enter Crispin Mbai’s home after the shooting after a distress call by his daughter, and taking him to hospital. That is my linkage [to Mbai’s death],” Nyaga said in an interview he gave to KTN television. “I was a victim of circumstances. The shooting took place when I was in my house and I went to his aid and took him to hospital, and I even guaranteed [medical fees] payment.”

He added that his licensed firearm was impounded by police during their investigation and “was found not to have been used”.

He warned he would be taking legal action against the commission.

The TJRC’s recommendations include calls for suspects in the Mbai murder case to be prosecuted, and for a report to be produced on the “circumstances, motives, and those responsible for the assassination and subsequent cover-up” within 18 months.

But despite this statement, Margaret Mbai has little hope that Kenya’s new government will ensure that such steps are taken.

“I do not think we will get justice from this report,” she said. “There appears to be no commitment from the government to implement it.”

Others take a similar view. Harun Ndubi, a human rights lawyer, pointed to disagreements that arose during the compilation of the report which could provide a way out for those wanting to avoid following its recommendations. Some of the commissioners have distanced themselves from sections of the report’s conclusions, particularly the chapter on longstanding grievances over land.

“It is difficult to conclude that the TJRC report will help victims get justice, because it lacks legitimacy and there is no commitment from the government to have it implemented,” Ndubi said.

The chances of seeing action have been complicated further by legal challenges launched by several high-profile figures named in the report, who are now seeking to clear their names.

As for the prosecutions recommended by the report, there is little optimism that Kenya’s Director of Public Prosecutions, DPP, will take on such cases, even though his office is independent of government. One obvious barrier lies in the need to instruct police to investigate crimes which its own officers stand accused of orchestrating.

The report recommends that state security agencies apologise for carrying out extra-judicial killings, arbitrary detentions, and acts of torture and sexual violence.

“The DPP will have a challenge because he will have to rely on the police to carry out investigations, yet the police department itself is named severally in that report as a perpetrator,” Angote said. “It cannot investigate itself.”

President Uhuru Kenyatta and deputy president William Ruto are both mentioned in the report in connection with the post-election violence of late 2007 and early 2008.

The two are due to stand trial at the International Criminal Court in The Hague on charges of crimes against humanity for orchestrating the unrest.

Despite widespread fears of inaction, the government maintains that it stands behind the report and will act on its recommendations.

Mzalendo Kibunjia, chairman of the government’s National Cohesion and Integration Commission, backed the commission’s findings, which he said were a starting-point for delivering justice in cases like Mbai’s death.

“I believe the [TJRC] report will help all the victims get justice because it has common truths in it. All that is remaining is for the government to take up the report and implement it,” Kibunjia said. “I have not seen reason to believe this will not happen. We should not lose hope at all. I am very positive about this,” he added.