Kenyan Authorities in the Dock Over Hate Speech

Was enough done to counter incitement and intimidation online during recent elections?

Kenyan Authorities in the Dock Over Hate Speech

Was enough done to counter incitement and intimidation online during recent elections? 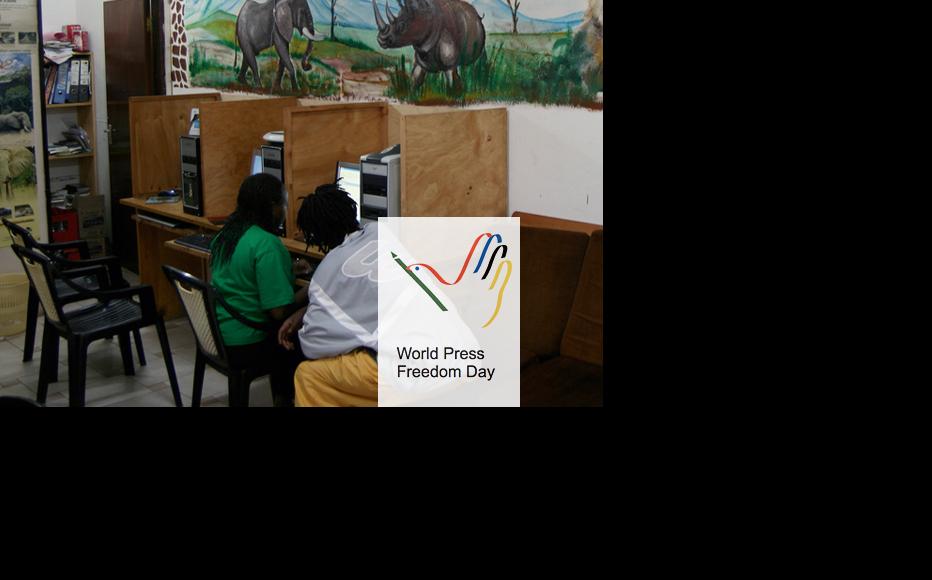 Cyber cafe in Kenya. (Photo: Giorgio Montersino/Flickr)
The link has been copied

After ensuring that last month’s general election went off peacefully, the authorities in Kenya have come in for criticism for failing to curb the wave of hate speech that spread over the internet.

After ethnic animosities were voiced on social networking sites like Twitter and Facebook, commentators say too little attention was paid to the threat posed by online rather than conventional media.

“The government was caught off guard,” Mark Irungu, a digital media developer at the media development organisation Internews, told IWPR. “Mainstream media after 2007 was properly taken care of [with efforts to stop hate speech]. We forgot about this other giant that was just chilling over there – the social media. Somehow we did not see the warning signs.”

The bloodshed that followed Kenya’s last presidential election in December 2007 meant the authorities were all too well aware of the media’s potential to incite violence.

Official media across the country were blamed for inciting strife. More than 1,100 people were killed and 650,000 others were displaced as the disputed ballot result triggered violence along ethnic lines.

After peace was restored with an agreement to form a coalition government, one outcome of the violence was the National Cohesion and Integration Commission, NCIC, set up in 2008. Its mandate was to cool ethnic tensions and help reconcile communities across the country.

Section 13 of the law establishing the NCIC makes it illegal to use threatening, abusive or insulting words, acts or materials liable to stir up ethnic hatred. Section 62 outlaws speech intended to incite feelings of contempt, hatred, hostility, violence or discrimination against any person, group or community on the basis of ethnicity or race.

Under the law, offenders can be given a three-year prison term, a fine of up to one million Kenyan shillings, 10,000 US dollars, or both.

Since the 2007 election, Kenya’s traditional media sector has done a lot to clamp down on hate speech. According to Umati, a Nairobi-based online monitoring group, this concerted effort has driven the extremists onto the internet.

In the latest elections which took place at the beginning of March, there was no repeat of the chaos of five years ago. But while towns and communities across the country remained peaceful, old ethnic tensions spilled out online. The Umati Project reported large numbers of threats and incitements to violence on social media networks.

“Much of the ‘violence’ shifted to the online space, especially Facebook and Twitter,” the Umati Project’s report for March said.

In November 2012, 28 per cent of a sample of 792 online statements monitored by Umati contained one or more examples of “dangerous speech” – a term the group uses to describe statements that characterise a group in derogatory terms or contain direct threats.

“The hallmark contained in most [offending] statements was when the speaker suggested to his [or] her audience that they face a serious threat or violence from another group,” Umati reported in November.

Umati reported that the incidence of “dangerous speech” media rose sharply as the election approached. The vote on March 4 was followed by a prolonged count, and then a legal challenge that was not resolved until the end of the month.

“In previous months, the most rampant call to action has been the call to discriminate, whether via insults or stereotypes,” the report said. “Of note is the sharp increase in calls to kill that has been witnessed in March.”

Following the ballot, the tensions grew so strong that the Catholic church convened a conference of its bishops in Kenya on March 21 to condemn the ongoing “hate on social media”.

The rapid rise of hate speech in virtual media is linked to the recent increase in internet access in Kenya and the widespread use of smartphones. Both have opened up new ways for people to vent anger, particularly at times of heightened anxiety like elections.

“In 2008, there were eight million Kenyans using mobile phones. Today there are over 30 million,” Angela Crandall, project manager at Umati, told IWPR. “There are more Kenyans using social media platforms as a communication tool.”

The NCIC is currently investigating six people whom it suspects of spreading hate speech online.

As this unwelcome phenomenon has taken off, there are questions about whether Kenya’s laws, police, and the NCIC have kept pace, or whether they have remained too focused on conventional media.

“As a website developer who understands how computers work, I think more would have been done in mitigating this,” Irungu said. “If deliberate efforts [and] proper machinery were put in place, most of the people [spreading hate] would have been tracked.”

One of the six individuals the NCIC is investigating is the well-known Kenyan blogger Dennis Itumbi. The NCIC has accused Itumbi of “posting threatening messages” on a Facebook account, which it alleges were “intended to cause ethnic hatred among various communities”.

In an interview with IWPR, Itumbi denied the allegations, insisting that none of his posts constituted hate speech, and asked the NCIC to identify the offending material.

He acknowledged that social media platforms were now the preferred medium for anyone wanting to intimidate or divide communities. And the authorities, he said, “lack the competence, the will, the technology and the agility to tame online hate speech in a dynamic world of technology”.

For example, he said, the government had failed to acquire the software needed to monitor blogs and social media sites. The offenders, he said, were “aware that they can beat them in the game”.

While the Kenyan authorities are well aware there is a problem, they say they face a number of practical challenges in tackling hate speech online.

Stanley Cheruiyot, Kenya’s assistant police commissioner, admitted that the tactics adopted for the election period were not geared towards internet offences.

“We prepared to provide physical monitoring of hate speech,” Cheruiyot said, explaining that this meant police were issued with recorders to monitor political rallies. “But the offence mutated… it was displaced to social media. The police are not trained so much on monitoring online hate speech.”

Kenya’s Director of Public Prosecutions, Keriako Tobiko, says that investigating cases, collecting evidence and prosecuting offenders requires both legislation and technology that are not yet available in the country.

Noting the progress made with monitoring offensive language in the traditional media, he suggested that the police might now need a dedicated “cyber crime unit”.

Kenyan laws, too, may need to be revised to cover forms of crime and evidence relevant to the digital era. One challenge has been the reluctance of judges to accept electronic evidence in court, and some cases have been dismissed as a result.

“Our laws have been lagging behind technologically,” Tobiko said. “There is a need to amend them to be in tandem with technology and enable speedy admission of electronic evidence.”

“It is very difficult to monitor and collect evidence,” he said. “The authors of such stories in most cases are anonymous and post hate messages from discrete sources.”

Kyalo Mwendi, NCIC’s assistant director for legal matters and complaints, agreed that investigating anonymous posters was time-consuming and costly. He acknowledged that the government did not have the required software and said it was difficult to obtain the names of suspected offenders from internet service providers or mobile phone operators.

However, according to Umati, the majority of the offending material is not posted anonymously. The group’s research in November 2012 showed that 90 per cent of those indulging in “dangerous speech” on the internet did not bother to hide their real identities.

“The lack of caution when speaking online suggests that the speakers are not considering the negative impact their statements could have, nor are they worried about being associated with the dangerous statements they make,” the report noted.

Irungu believes the government now needs to invest more in tackling online offences. He believes it is not as difficult as it seems, and points out that even anonymous posters have to provide details like email addresses and telephone numbers when they join a social media site.
“We need to be in line with the times we are living in,” Irungu said. “Cyber crime is likely to shoot up.”

TACKLING THE ROOTS OF HATE

Others, however, argue that the medium where hate speech appears is less relevant than the fact that people are still engaging in it. That, they say, is the real issue that needs to be addressed.

Crandall of the Umati Project says the focus should be on long-running problems that cause tension and animosity.

“Taking too short of a view of hate speech and only focusing on the symptom will ignore the root causes which are in issues such as land [ownership], youth unemployment, and impunity;” Crandall said.
“If these larger issues are addressed, constructively discussed and adequately tackled, then I think over time, hate speech may decrease.”

Leading figures at the NCIC, meanwhile, have suggested that the scale of the online hate speech problem has been overstated.

“I would be hesitant to say that there is post-election violence taking place on the blogosphere,” Milly Lwanga, deputy chair of NCIC, said. “I would say there is a lot of tension and people now feel free to talk rather than be gagged. Our concern right now is to ensure that this discussion does not veer off to entrench animosity among our peoples.”

Examining the content of internet posts suggested that “a lot of these conversations you are seeing on social media are not really hate speech if you apply the law”, Lwanga said. “The yardstick for hate speech in the law is the potential and capacity of those utterances to cause ethnic hatred.”

Lwanga said that rather than going after everyone who posts threatening messages, the commission has been working with bloggers to get such posts removed. However she played down the threat posed by the some of the more aggressive conversations online.

She added that a balance must be retained between “checks on hate speech and promotion of freedom of speech and expression”.

Alice Nderitu, who heads educational programmes at the NCIC, said the commission could not force people to live in harmony; this was something they would have to decide to do themselves.

“People pay too much attention to prosecution,” she said. “The things we are doing under the education focal point may not have an immediate impact, but it will certainly have a huge impact in a few years to come.”

Henry Maina, director of Article 19, the London-based organisation that promotes freedom of expression, told IWPR that neither laws nor policing would solve the real problems.

“We need to ask ourselves: what is it that divides Kenyans to the extent that how they communicate with each other is offensive?” Maina said. “There are latent issues in society. If they are not addressed, Kenyans will continue to express them whatever the platform.

“The police are not always going to be there to investigate every small conversation that turns abusive. That would not be the proper use of state resources,” he concluded. “We are pushing this thing of hate speech too far.”