The second prosecution witness to appear in The Hague says deputy president never called on supporters to drive people out of the Rift Valley.

The second prosecution witness to appear in The Hague says deputy president never called on supporters to drive people out of the Rift Valley. 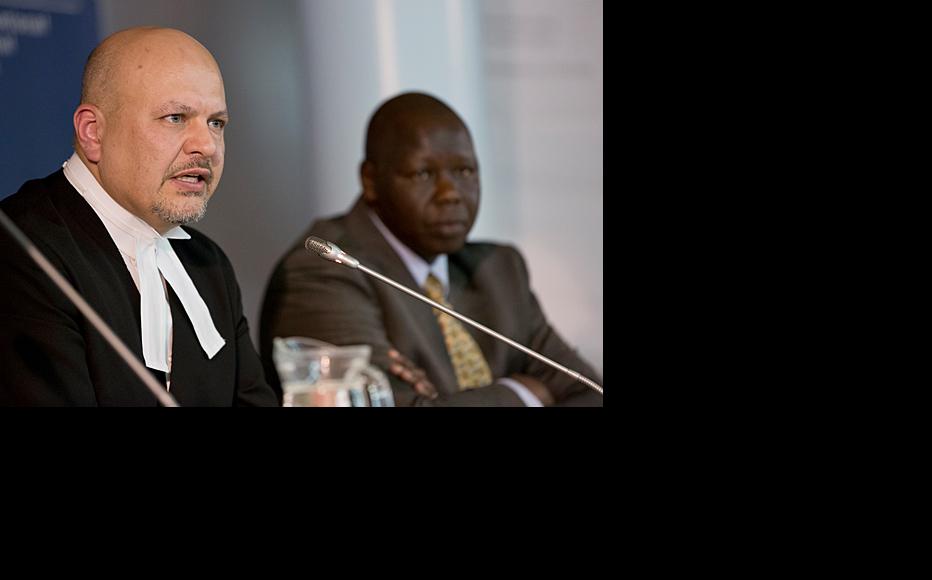 The International Criminal Court Defence Counsel for William Samoei Ruto, Karim Khan, and the Defence Counsel for Joshua Arap Sang, Joseph Kipchumba Kigen-Katwa. Both have been cross-examining a protected witness, who is known only by the reference PO 326. (Photo: ICC-CPI/Flickr)
The link has been copied

A prosecution witness testifying against Kenya’s deputy president in The Hague has told judges that he never heard the defendant inciting people who attended his political rallies ahead of the December 2007 election.

The protected witness, who is known only by the reference PO 326, said that in the run-up to the polls he attended various campaign rallies led by William Ruto, at that time deputy leader of the Orange Democratic Movement, ODM, party.

Ruto’s lawyer, Karim Khan, put it to the witness that he had attended a large rally at Uhuru Park in Nairobi in December 2007 as well as a number of other gatherings.

“You never heard anything from William Ruto amounting to incitement, did you?” Khan asked.

The witness said he had not.

Ruto is charged by the International Criminal Court (ICC) with orchestrating the bloodshed that engulfed Kenya in the aftermath of the disputed 2007 presidential election.

More than 1,100 people lost their lives and 3,000 others were injured in political and ethnic violence that was brought to an end in early 2008 by an internationally-brokered peace deal.

Prosecutors allege that Ruto put together a network of influential leaders who planned to forcibly expel supporters of their political opponents, the Party of National Unity (PNU), from the Rift Valley province.

He is charged alongside former journalist Joshua Arap Sang with crimes relating to the period after PNU candidate Mwai Kibaki was elected president for a second term.

Sang stands accused of using his radio programme on KASS FM to fan and coordinate attacks.

The charges against both defendants relate to attacks in Uasin Gishu and Nandi districts in the Rift Valley.

According to the prosecution’s pre-trial brief, Ruto and other members of his network held a series of political rallies in both districts ahead of the ballot, during which they communicated their message and “laid the groundwork for their plan to evict the PNU supporters from the Rift Valley”.

Prosecutors allege that Ruto “addressed the crowds passionately and incited them, declaring either directly or through parables that non-ODM supporters should be evicted”.

This week, the prosecution sought to link the ODM to the electoral violence of 2007 and early 2008 on the basis that land was a contentious issue in the Rift Valley. The pre-trial brief alleges that “Ruto exploited the determination of many Kalenjin to reclaim their ancestral land and their yearning for regional autonomy”.

The witness told judges this week that ahead of the 2007 election, Kalenjins in the Rift Valley were unhappy about land issues.

“The Kalenjins were dissatisfied that their land was being occupied by people from other communities,” he said.

During the witness’s evidence led by the prosecution, he testified that Ruto used coded language to refer to non-Kalenjins and their occupation of land.

“[Ruto] said that it was the era of the ‘hyenas’ – I am using that word in quotes, those people with large pieces of land – to give it back and resettle the landless,” the witness said in court.

Although he later told Khan that he never heard Ruto inciting the crowds, the witness told the prosecutor that at a rally in Kitale, the defendant spoke of the “weeding” and “uprooting” of “outsiders” from the Rift Valley, so that their land could be given to residents who did not own land.

Witness PO 326 is the second witness to testify against Ruto and Sang since the trial began on September 10.

Witness PO 326 described how the ODM was formed out of a broader campaign opposing a new draft constitution. In 2007, it became the main opposition to the PNU. According to the witness, Ruto was the party’s leading representative in the Rift Valley.

The witness told the court how the ODM had gone about building popularity in 2007 in order to secure votes.

“ODM had a strategy of reaching to the people on the ground, using the delegates on the ground, and through the leadership structure, and also through the media, through campaign materials such as billboard, fliers and posters,” the witness said.

The witness said Ruto was an influential leader of the Kalenjin ethnic group, and had been tasked with leading ODM campaign rallies in the Rift Valley.

“Ruto was one of six individuals who formed the top decision-making body of the ODM party, called the Pentagon,” he told judges on October 8.

The witness described Ruto’s status as a senior leader of both the Kalenijin and the ODM in the region, and was crowned “King of the Rift Valley” at a community ceremony.

The prosecution asked the witness whether Ruto gave any financial assistance to the ODM during campaigning, but the witness was not certain whether this was the case.

“I cannot be specific whether Ruto provided any financial assistance to the campaign,” he told the court.

Witness 326 said he knew Sang as a radio presenter for Kass FM, but that he did not know which programme he presented. Kass FM was a station that broadcast in the Kalenjin language and was widely listened to in the Rift Valley.

After the witness took the stand on October 7, he gave his evidence in public, but with measures to ensure his face appeared pixilated and his voice distorted in the public broadcast of his testimony. The court went into private session on a number of occasions to avoid revealing information that might expose his identity.

Barely ten minutes into his cross-examination, Khan asked the judges to go into private session so as not to risk identifying the witness through specific questions.

Earlier in the week, it emerged that there had been attempts to publicise the identity of another protected witness. The first witness to testify in the case had her identity revealed on a number of Kenyan blogs and social media sites. Judges ruled that the testimony of that witness should continue in private session.

This week, prosecutors supported the use of private sessions for PO 326, too, with provision to be made for redacted transcripts of the proceedings to be made public at a later date. But the defence opposed conducting all proceedings in private, arguing that public testimony would not lead to the witness being identified.

“My client should not be punished by way of blanket private session as a result of something for which he has no control over,” Khan said in court.

Khan argued that the continued use of private session could tempt witnesses into giving false testimony.

“We do have information that certain witnesses have been promised that they can lie with impunity before this court in closed session,” he told judges.

J.J. Wangui is an IWPR reporter in Nairobi.