Project aims to provide aid to as many people as possible during the colder weather.

Project aims to provide aid to as many people as possible during the colder weather. 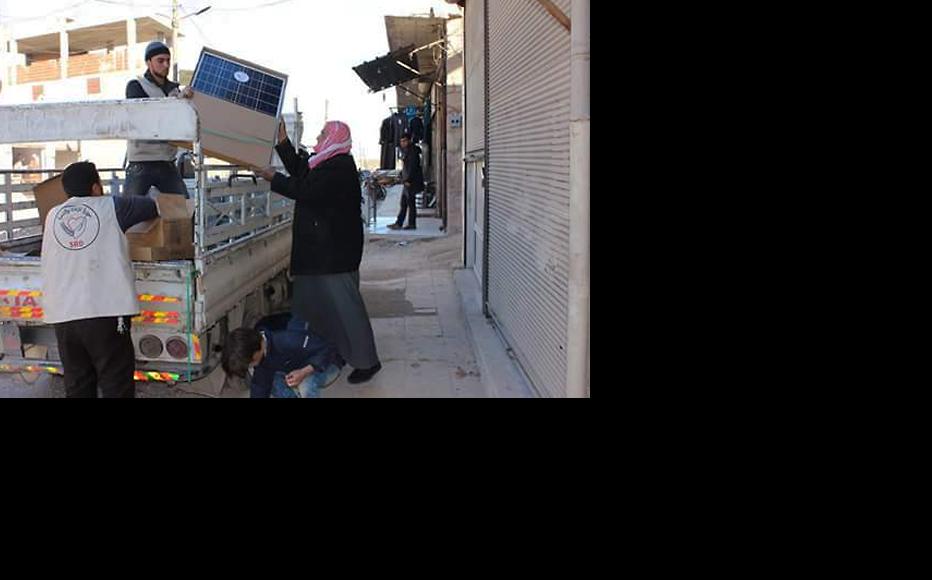 Employees of the Syria Relief and Development NGO distribute solar-powered appliances. (Photo: Shelter)
The link has been copied

Umm Hassan and her six children were desperate to keep warm. Winter had arrived, but they had no oil to light their old stove.

Each morning they would venture out in search of alternative fuels.

Umm Hassan, a 42 year-old widow, would walk to Kfar Nabel’s orchards to collect firewood. Her children would scour the neighbourhood streets and rubbish containers for discarded pieces of plastic and cardboard.

Back home, they would pool the items they had collected and light the small stove donated to them by a neighbour.

“After my husband died our financial situation deteriorated to a point where I could barely feed my children,” she told Damascus Bureau.

Umm Hassan’s late husband left her a small shop that she rents out for 10,000 Syrian pounds (50 US dollars) a month. The young widow said that this amount was not enough to buy basic foodstuffs and medicine, and fuel for heating and cooking was out of the question.

“Amidst all this misery, a delegation came to Kfar Nabel with a truck full of winter relief items,” she continued, her face lighting up..

They gave Umm Hassan a new heater, some coal and some kitchen utensils.

“They couldn’t have come at a better time. God bless them for alleviating a little of our suffering,” she added.

The delegation was from the Syria Relief and Development (SRD) NGO, which is involved in a number of aid schemes.

One of these projects, Shelter, aims to provide aid to as many people as possible during the colder weather.

According to Shelter’s logistics officer Ubayda Dandush, the project helped more than 325 families in Idlib and its countryside this winter.

“Winter is a harsh season in Syria and these homeowners urgently need our help. The repairs we carry out include fitting new doors and windows, and we also provide families with solar-powered batteries for heating and light.”

Dandush said that the main beneficiaries were families who have lost their breadwinner, such as widows, families of martyrs and detainees, and displaced people.

“We rely on local councils to document humanitarian cases that need assistance. We also conduct fact-finding missions to determine and assess damage and need,” he added.

The project also runs health seminars that teach people how to handle winter illnesses and support workshops for those psychologically affected by the war.

Speaking to Damascus Bureau, SRD’s Idlib director Uqba al-Daghim said that the organisation was also working with the Al-Sham hospital, a number of prenatal and postnatal care centres and a mobile clinic for the newly displaced.

The 30 year-old director added that an X-ray and CT scan centre were currently under construction.

Abu Ahmad fled with his wife and five children from Hama’s countryside to the village of Maarrat Hurma.

The 40 year-old was forced to have one of his hands amputated after it was injured by shrapnel.

Unable to work, he could not afford to pay rent, so his family found refuge in an empty semi-demolished house.

“We took shelter in the house during summer, so the missing windows and doors and the partially damaged walls did not bother us too much.

“But when winter arrived, we found ourselves in a difficult situation. Cold winds would blow through the house day and night,” he said.

Unable to afford repair work, Abu Ahmad tried to patch up some of the damage using fabric and plastic sheets.

Then, a Shelter employee came to inspect the damage and not only arranged for the house to be repaired but also provided the family with a new heater and some kitchen utensils.

“Shelter has given us back some of the life we lost after becoming refugees in our own country,” Abu Ahmad said.

Ruhuj, a woman in her 70s, had also been living in poverty together with her blind husband. Her children and their families had fled Syria to seek refuge in neighbouring countries and the elderly couple were all alone.

“I would go to bed early hoping the covers would keep me warm,” she told Damascus Bureau.

“By the time I would fall asleep my pillow would be soaking wet with tears.”

Ruhuj was heartbroken that she and her husband had to rely on charity, and dearly missed her children whom she had not seen in years.

During the day, she and her husband would wear their threadbare coats and sit outside, hoping the winter sun would warm them up.

Now, Shelter has provided Ruhuj and her husband with both heating and lighting appliances, much improving their quality of life.

“I am now blessed with warmth during winter and can live a normal life. I can also watch TV which is powered by the battery they gave me,” she said.

“Hopefully, our country will also go back to normal after the long darkness it has endured.”