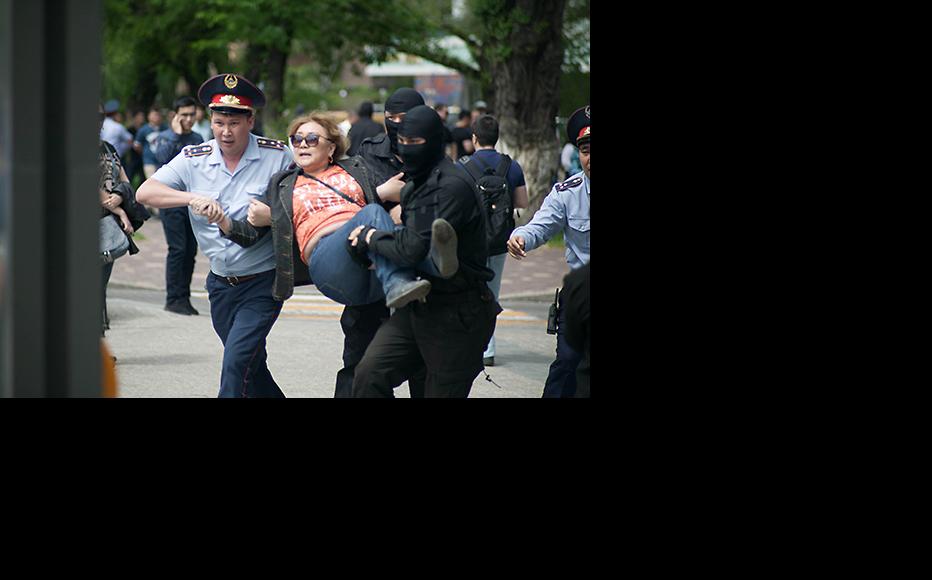 Police detain an opposition activist during recent protests in Kazakstan. (Photo: Inga Imanbay)
The link has been copied

A renewed flurry of activity by Kazakstan’s long moribund opposition movements may be awakening new interest in political activism in a country that has been headed by President Nursultan Nazarbayev for nearly 30 years.

But analysts say that any imminent or dramatic political change is unlikely, warning that the government is canny enough to try to play any emerging opposition groups off against each other.

Developments include a recent series of rallies held by supporters of the Democratic Choice of Kazakstan (DVK) opposition movement. A new political platform was also formed by opposition figures at a conference last month held in Brussels.

These events are particularly interesting in a context where public protests are de facto banned and opposition movements - including the DVK – are denied formal registration or deemed to be extremist organisations.

Police violently broke up the May 10 protests, in which activists demanded that the authorities release political prisoners and stop torture, and detained over 100 participants, including elderly people and teenagers.

Exiled billionaire businessman Mukhtar Ablyazov, the driving force behind the DVK, had issued a social media call for people to join the rallies.

Since the most recent protests, the DVK group has experienced a surge of interest on social media. Their group on Telegram, for instance, has grown almost tenfold.

However, almost every evening – usually coinciding with a live broadcast by Ablyazov –Telegram, Facebook and YouTube crash. The ministry of information and communications warned that this was a likely outcome of their efforts to remove “illegal materials of the Democratic Choice of Kazakstan as an extremist movement”.

On March 13, 2018, the General Prosecutor’s Office announced the judgement of the Yesil District Court of Astana that found the Democratic Choice of Kazakstan to be an extremist movement.

Oksana Loskutova, a spokeswoman for the General Prosecutor’s Office, said that Ablyazov “deliberately incites social hostility and hatred” with the intention of “the overthrow and assumption of power”.

On that same day, the authorities announced that they had initiated cases against DVK activists across Kazakstan. Police also arrested three people in Almaty who had expressed support for Ablyazov online.

The police and the prosecutor’s office have also called in activists for questioning and warned them that any form of approval for the DVK online would be interpreted as supporting extremism.

However, the authorities have refused to make public the court judgement which found the movement to be extremist.

The roots of today’s DVK lie in a movement that began in late 2001, when a group of young public officials and businessmen established a party to campaign for reform.

Ablyazov, then the chairman of the board of directors of Temir-bank, and Galymzhan Zhakiyanov, at that time the governor of the Pavlodar region, were its leaders.

In January 2002, the DVK movement split into a radical faction led by Ablyazov and Zhakiyanov, and a more moderate wing. In the spring of that year, the leaders of the radical wing were arrested and sentenced to six and seven years in prison.

In December, 2004, supporters of this radical wing announced the creation of a new political party that would retain the same name and elected Zhakiyanov, who was still in detention, as their chairman.

The party was never registered and was shut down completely in January 2005 after being charged with extremism and “incitement to social hostility and hatred”.

However, Alga was supportive of the protracted strike by oil workers in the western town of Zhanaozen. On December 16, 2011 - independence day - police fired on protesters in Zhanaozen, killing killed 17 according to official data, although other sources put the toll as high as 70. Police also used live fire on strikers at Shetpe Station on the same day.

The authorities blamed the unrest on Alga and sentenced Kozlov to seven and-a half-years in prison. Alga was deemed to be an extremist organisation on December 21, 2012.

After Ablyazov was pardoned and released in May 2013, he was allowed to take up the post of chairman of a major national bank in what was interpreted as a sign of Nazarbayev’s forgiveness.

However, in 2009 he was accused of embezzling five billion US dollars and left the country for the UK. From exile, Ablyazov declared his own presidential ambitions and began to speak openly about unseating Nazarbayev.

In April 2017, Ablyazov announced the revival of the Democratic Choice of Kazakstan Movement with a swathe of new activity on social media.

Political consultant Danila Bekturganov, who used to work with Alga, said that Ablyazov and Astana were playing a game of cat-and-mouse with little real significance.

“Mukhtar Ablyazov has to play the role of the opposition, at least before the West,” he said. “For this purpose, he regularly ‘throws in’ statements [critical of Nazarbayev]  on the internet. The authorities also have to respond because Ablyazov and DVK antagonise them a great deal, and also it would be a sign of weakness not to respond to his attack.”

Some have connected the regime’s calm treatment of a political platform dubbed New Kazakhstan with Ablyazov renewed activism.

Held in Brussels on April 8-10, convenor Akezhan Kazhegeldin, a former prime minister of Kazakstan turned opposition activist, said that Ablyazov had been invited to participate but had declined.

Kazhegeldin, formed the Republican People’s Party of Kazakhstan (RNPK) after leaving power in 1998 and lives in exile, having been sentenced in absentia to ten years in prison on charges that remain unclear.

Some interpreted the fact that the Kazak authorities did not prevent opposition figures from attending the conference as a way of countering Ablyazov’s influence.

Sergei Duvanov, a journalist who has long cooperated with the RNPK, said the creation of the New Kazakstan was an “autonomous project of the opposition” rather than connected in any way with the government.

However, he stressed that unlike the DVK, New Kazakstan had no ambitions for regime change and were prepared to wait until Nazarbayev chose to leave office.

Andrei Sviridov, a historian who has tracked the Kazak opposition movement, said that the two movements would not necessarily clash with each other.

“I can see no contradictions with the creation of New Kazakstan, despite of the DVK being newly [reformed] last year. Moreover, we have many people who want to protest or feel critical about the authorities. Anyway, they can join both DVK and New Kazakstan. However, after the DVK was deemed an extremist organisation, it would be risky for many people to be associated with it, so they prefer to join New Kazakstan.”

There are currently only three opposition parties in existence in Kazakstan, and they generally support the government.

But even though public demonstrations are banned, there are still occasional outbreaks of dissent.

In 2017, there were protests against reforms that allowed foreign citizens to acquire ownership of land. The two activists who initiated the protests were imprisoned for five years each, but the president imposed a moratorium on the proposed law.

In recent years, more than a dozen people have killed or attempted to attempted to kill themselves in protest against issues such as police harassment or unfair trials.

Andrei Grishin is a human rights activist and IWPR-trained journalist based in Almaty.