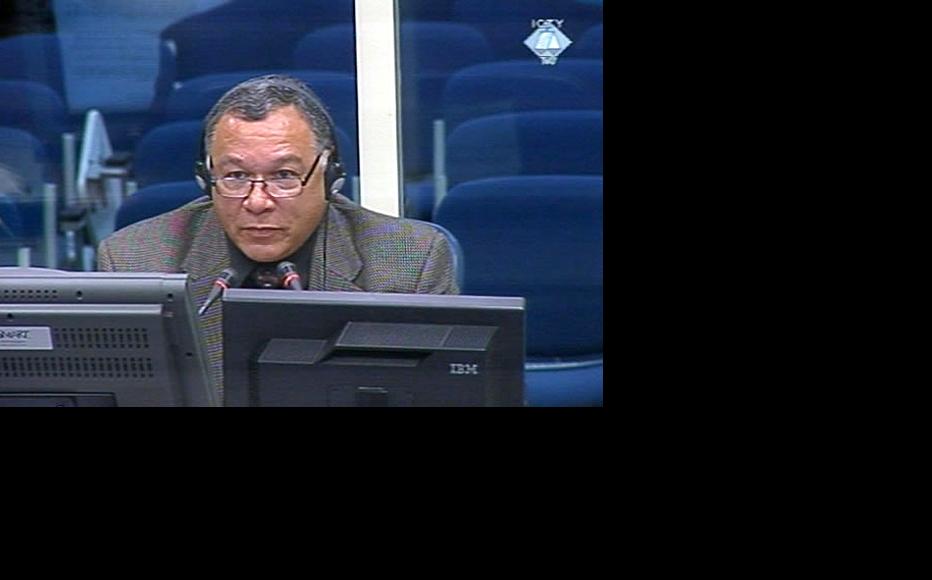 Stephan Joudry, defence witness in the Karadzic trial. (Photo: ICTY)
The link has been copied

The trial of former Bosnian Serb leader Radovan Karadzic continued this week with the testimony of several defence witnesses focusing on the 1994 shelling of the Markale market in Sarajevo.

According to the indictment against Karadzic, on February 5, 1994, a single mortar shell fired from a Bosnian Serb army position outside the city killed 66 civilians and wounded 140 in this crowded open-air market in central Sarajevo.

Karadzic, who represents himself in court, claims that the incident was staged by the Bosnian army in order to provoke NATO attacks on Serb positions around the city.

The first witnesses who testified this week was Stephan Joudry, a retired Canadian army colonel. At the time of the 1994 Markale attack, Joudry was a senior staff officer in the United Nations Protection Force, UNPROFOR, stationed in the Croatian capital Zagreb.

"We received reports about the incident [at the Markale market] which were sent to us from the UN teams in Sarajevo", Joudry said, adding that this was "standard operational procedure".

However, he noted that the reports he saw were not compiled in an entirely professional manner.

"Looking at the report of the crater analysis which was carried out by the operatives on site, there is no way that one could conclude… who was to blame for this incident."

He added that the "methods and the results of the investigation left a rather strange feeling about the whole thing, and many unanswered questions".

The witness said that in his personal view, "the incident was caused by the Bosnian side, probably by a projectile which was thrown by hand from a nearby terrace".

Joudry offered no explanation as to how he came to this conclusion, except to say that “it would be the most efficient way to hit [the target]. Otherwise, it would be impossible to hit the market with just one projectile.”

During cross-examination of the witness, prosecutor Alan Tieger challenged his testimony.

"So do you have a basis to dispute the statements of the witnesses?" the prosecutor asked.

Asked by the prosecutor to elaborate on his claim that the projectile was thrown by hand from a nearby terrace, Joudry said that "one or two persons could do it, with a mechanism or without one".

Tieger said that afterwards, the attackers would have had to run down "among the bodies of the dead and injured and place a stabiliser [mortar round tailfin] within the crater at such an angle which would show that the shell was fired from far away".

"Yes, that could be the case," Joudry said.

The second witness who testified this week was another Canadian officer, John Russell. He served with UNPROFOR and was based in Sarajevo at the time of the attack.

Russell told the court that he was in Markale on the day of the incident and saw the shell crater.

"The large impact angle was indicating that [the mortar round] probably came from the Bosnian Muslim side," he said. "I mean, that was my initial feeling, but what I stated in my report later was that the projectile was fired from a distance ranging from 900 to 4,800 metres. And judging by the direction from which it was fired, it could have been launched from either side of the front line.”

The witness added that by the time he arrived on the scene, "the shrapnel and the dead bodies had been removed from the site".

“This was an unacceptable interference with the investigation from the Bosnian Muslim side. The stabiliser and all the remains of the projectile had also been removed", Russell said.

During the cross-examination of the witness, prosecutor Kimberly West said such a clean-up was considered "normal procedure", and would not have influenced the investigation because there were sufficient traces left on site.

However, Russell stuck to his claim that clearing the site interfered with evidence, adding that he had even written in his diary that he was convinced “the Bosnian side fired on its own people".

The third witness who testified about the Markale massacre this week, retired Canadian general Michael Gaultier, said that he investigated the scene of the incident a few days after it happened.

He said he was sent to Sarajevo on February 11, 1994, from UNPROFOR headquarters in Zagreb to investigate the incident.

When Karadzic asked this witness whether the crater could have been "dug up", he replied, "We saw a crater on site, but it is true that it may have been interfered with during the time between the incident and the time by which we arrived at the scene."

"The result of our investigation was that the mortar shell was fired from a direction which spread across the territory controlled by both sides, from a distance between 300 and 5,500 meters, and any side could have fired the shell," Gaultier said.

Prosecutor Carolyn Edgerton asked Gaultier whether he was familiar with UNPROFOR's information that there were no Bosnian army mortar positions in the given line of fire at the time of the incident, to which the witness replied that he was.

He also said that he and his team did not visit Bosnian Serb army positions located along the flight path of the mortar.

"It would be like looking for a needle in a haystack", he explained, "so we didn't even ask to go there".

In addition to the three Canadian officers, Karadzic invited another witness this week, Dr Derek Allsop from Great Britain, who wrote an expert report on the Markale incident for the defence.

According to Allsop, the only thing he could confirm as a result of his investigation was that it was "impossible to determine the speed and angle of the shell and therefore the place where it was fired from".

However, Allsop dismissed the theory "that the projectile was fired from the terrace of a nearby building". He said this was "entirely improbable and unfeasible".