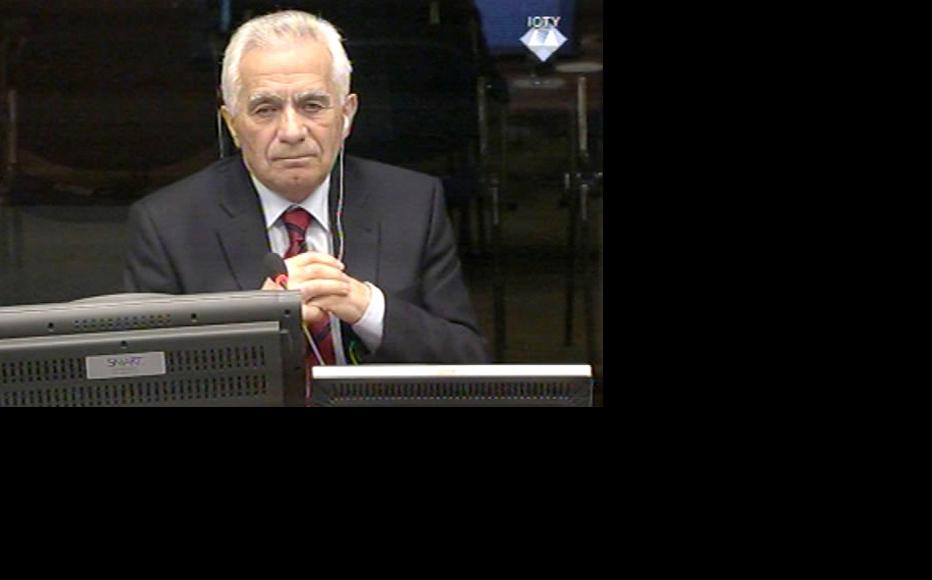 Momcilo Krajisnik, defence witness in the Karadzic trial. (Photo: ICTY)
The link has been copied

The wartime speaker of the Republika Srpska (RS) assembly told the Hague trial of former Bosnian Serb president Radovan Karadzic this week that the conflict began in response to “constant provocations” by Muslim and Croat politicians.

Momcilo Krajisnik, who testified in Karadzic’s defence, was found guilty by the Hague tribunal in 2006 of extermination, murder, persecution and other crimes against humanity and was sentenced to 20 years detention. He was granted early release from a British prison in 2013

Karadzic is standing trial for genocide and for having “planned, instigated, ordered and/or aided and abetted persecutions on political and religious grounds against Bosnian Muslims and Croats” during the 1992-95 war.

Krajisnik’s extensive testimony included numerous references to his activity as the speaker of the parliament of Bosnia and Herzegovina in 1991-92, and then as chairman of the RS assembly from 1992 to 1995.

As he began giving evidence, Krajisnik said that his own Hague judgement must be reviewed and that he wanted to “prove his innocence in a truly fair trial”.

“I am living for the day when I will hear the words ‘not guilty’,” Krajisnik told the judges.

Discussing the events which led to the Bosnian conflict, Krajisnik said the war began in response to “constant provocations and actions by Muslim and Croat members of the Bosnian parliament against the Serbs. They claimed that Bosnia and Herzegovina must secede from Yugoslavia in an unconstitutional way.”

He then commented on the declaration of sovereignty of the Republic of Bosnia and Herzegovina, adopted by a parliamentary majority in October 1991.

“The Serbs did not leave the parliament,” Krajisnik said. “We just did not think it would be possible to accept its illegal and unconstitutional decision.”

Krajisnik told the court that the senior Muslim leadership, including the late Bosnian president Alija Izetbegovic and the then prime minister Haris Silajdzic, “were very much in agreement with the partition of Bosnia and Herzegovina, leaving a Serb area with ‘as many Serbs as possible within it’ to a fate which could be decided by [Serbs], including possibly joining Serbia”.

He added that “the international community also reassured Serbs that, regardless of the situation in Bosnia, they would remain the masters of their own fate and decide on their own status”.

Krajisnik then referred to Karadzic’s speech of October 14, 1991 in the Bosnian parliament, in which the accused said, “The road that you want to take Bosnia and Herzegovina down is the same highway to hell and suffering that Slovenia and Croatia have taken. Do not think that you will not take Bosnia and Herzegovina to hell and the Muslim people perhaps to annihilation, because the Muslim people cannot defend themselves if the war breaks out here.”

According to Krajisnik, these words were not “a threat, as was so often alleged, but rather a warning, an appeal to the Muslim side to prevent a war which Serbs definitely did not want”.

The witness told the court that the Bosnian Serb leadership never planned the ethnic cleansing of territories in which Serbs formed a majority, nor did they ever plan any crimes against Muslims or Croats.
“In fact, local Serb leaders in municipalities with a Serb majority were implementing the policy of the SDS [Karadzic’s Serb Democratic Party, to which Krajisnik belonged] of protecting all non-Serb minorities, such as in Banja Luka, Srbac, Prnjavor and other towns under Serb control,” Krajisnik said.

Commenting on events in Sarajevo, Krajisnik said Serb military positions around the city were attacked by Muslims “who wanted to provoke a reaction of the international community.

“They were hoping to present themselves as victims, and Serbs as the evil aggressors,” he added.