Resettlement scheme angers Azerbaijan, which sees it as an obstruction to an eventual peace deal.

Resettlement scheme angers Azerbaijan, which sees it as an obstruction to an eventual peace deal. 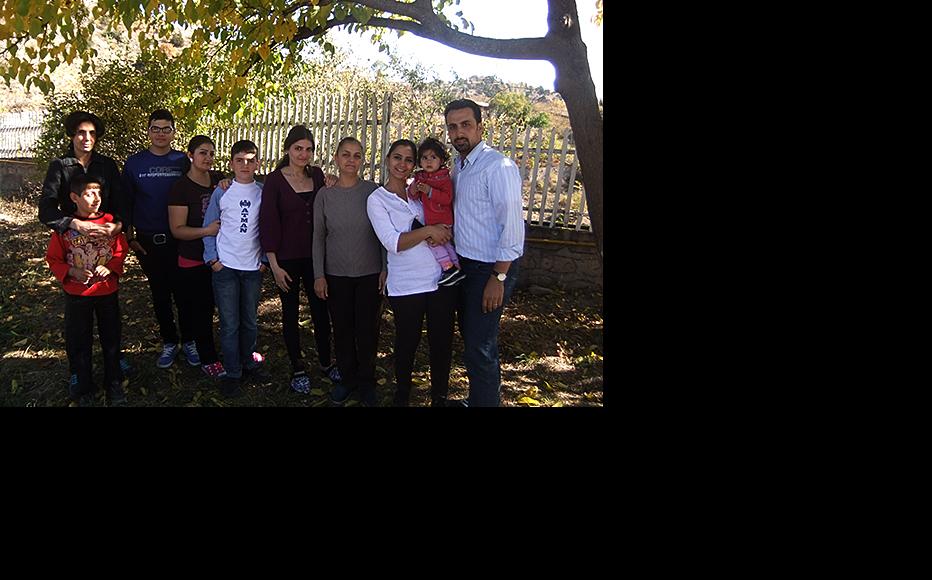 The Poghosyan family, Armenians from Syria now living Karabakh. (Photo courtesy of Vardan Poghosyan)
The link has been copied

Some of the Armenians fleeing the conflict in Syria are being welcomed as settlers by the authorities in Nagorny Karabakh.

Robert Matevosyan, head of the resettlement department at Nagorny Karabakh’s Kashatagh district government, says 25 families have moved there since the civil war started in Syria.

“The first families to come to Kovsakan already have their own houses, and an apartment block has been restored and others have been given homes there. Those who moved to Berdzor are currently living in a guesthouse and aren’t being charged for it,” he said.

Azerbaijan, which claims Karabakh as its territory and is home to hundreds of thousands of refugees from the region. Officials and others there were furious at the resettlement programme, saying it was a breach of international law.

“We have informed the United Nations and the Organisation for Security and Cooperation in Europe about it,” Azerbaijani foreign ministry spokesman Elman Abdullayev said. “This isn’t the first time Armenia has carried out an illegal settlement in Nagorny Karabakh. This is a provocation; it hinders the peace process.”

Azerbaijan holds Armenia responsible for the situation, and refuses to engage in negotiations with Karabakh.

The Kashatagh district – which Azerbaijan calls Gubadly – lies next to the “Lachin corridor”, a strip of land that in Soviet times separated the Armenian republic from the Armenian-majority Nagorny Karabakh region, which was administratively part of Azerbaijan.

In 1992, early on in the Karabakh conflict, Armenian forces seized the corridor, thus providing a direct link to Armenia.

Karabakh has declared itself an independent state but has not won international recognition. Since a 1994 ceasefire, attempts to find a negotiated solution to the dispute have failed.

Although Kashatagh is Karabakh’s largest district, its population stood at just 8,500 in 2011, since many residents fled during the fighting and now live as refugees in Azerbaijan.

Local officials welcome any new arrivals who can help make up the numbers.

Homes are being built or restored for the incomers, since those left empty after the war were often dismantled for use as building materials.

Matevosyan said jobs were being found for the Syrian Armenians, who were also receiving food supplies.

“We are giving farming families large patches of land,” he added.

Matevosyan said another ten families had contacted his department to ask about moving to his district.

“We are ready to accept anyone who applies to us,” he said. “Kashatagh residents understand the problem. They don’t mind if their own houses aren’t being repaired; they are ready to help fellow-Armenians in trouble.”

Vardan Poghosyan is one of the new arrivals in Berdzor, where he has brought his wife Lusvard and their one-year-old daughter.

He is working for the phone company Karabakh Telecom while Lusvard has found a job in a hotel. They have now been joined by Vardan’s brother and Lusvard’s parents.

“I chose Karabakh immediately,” he said. “I didn’t want to live in Armenia – it’s quieter here. I spent 15 days in Armenia and then went back to Syria. After that, I decided to move to Karabakh.”

Azerbaijani officials say the settlement scheme is a deliberate ploy designed to block a resolution of the Karabakh dispute and rule out the possibility that refugees might one day return home.

”Karabakh is Azerbaijani land. It is unacceptable to settle Syrian Armenians there without the permission of Azerbaijan,” Abdullayev said. “It violates international law and also the rights of the Azerbaijanis who were forced to leave Nagorny Karabakh.“

He added, “It is also disappointing that the international community is opting to remain silent about this.”

Poghosyan does not see Azerbaijani objections as a problem.

“I really don't understand why we should take Azerbaijan's reaction or opinion into account,” he said. “These are our lands. Azerbaijanis have no place here, unless there is a peace deal which will allow all refugees to return to their homes.”

He added, “We lost a great deal in Syria, and this place is a refuge for us. We are going to settle here and develop the area.”

One of the difficulties facing the new arrivals from Syria is that they speak a different dialect of Armenian.

“The Karabakh dialect and Eastern Armenian are a bit hard to understand, but we’ll manage, we’ll gradually get used to it all and understand one another,” Poghosyan said. “It’s the same language; it’s just the sounds and the writing system that differ. We’re all Armenians, after all.”

Activists in Azerbaijan were angered at what they saw as their government’s inaction on the issue.

“I am dissatisfied with what the Azerbaijani government is doing about it. All it’s done is raise the matter with international organisations. That’s it,” said Akif Naghi, who heads the Karabakh Liberation Organisation. “It’s behaving like an NGO, not a government…. It thinks it’s enough to inform the United Nations about it.”

Naghi called on the authorities to press for international sanctions on Armenia to secure an end to the settlements.

Karen Ohanjanyan, coordinator of the Karabakh Committee of Helsinki Initiative-92, describes the programme as “a demonstration of solidarity”.

More than that, he said, the Armenians from Syria would be a valuable addition to the community.

“They come from a traditional society where the culture of cooperation is very highly developed. Many were businessmen and are well educated. Their organisational skills in economic and other areas will be a significant boost to development in Nagorny Karabakh,” Ohanyan said.

Charities in Karabakh and Armenia are offering help to the new arrivals. Three of them are planning to restore old apartment blocks as accommodation.

After meeting the refugees from Syria, Artak Beglaryan, head of an NGO called Will, was impressed with their stoicism.

“Of course there are hardships, and everyone knows they lived in better conditions in Syria, but the important thing is that they’re prepared to work and strive,” he said.

Despite such optimism, Richard Giragosian, director of the Regional Studies Centre, a think-tank in the Armenian capital Yerevan, questions the sustainability of this resettlement. He points out that Armenians from Lebanon who came to Karabakh in an earlier influx eventually gave up and left.

Not only did the Karabakh authorities lack “both the capacity and the resources” to help the Syrian Armenians establish themselves, the regional environment was not conducive to their resettlement.

“The situation on the ground is now even more unstable, since the threat of war looms large over the region and over Karabakh itself,” he said.

Hayk Ghazaryan is a correspondent for the Hetq newspaper in Stepanakert, Nagorny Karabakh. Shahla Sultanova is a freelance journalist in Azerbaijan.