Karabakh After the War

Karabakh After the War 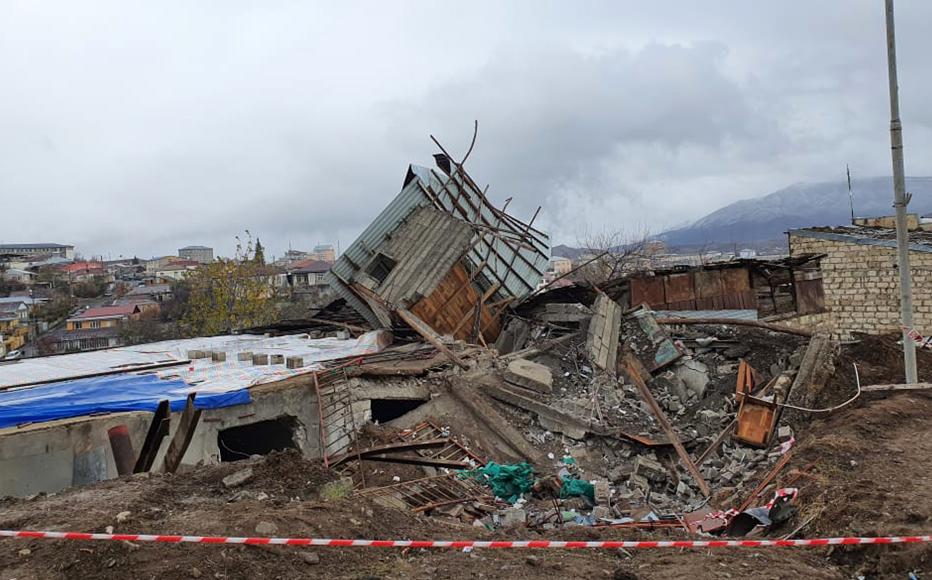 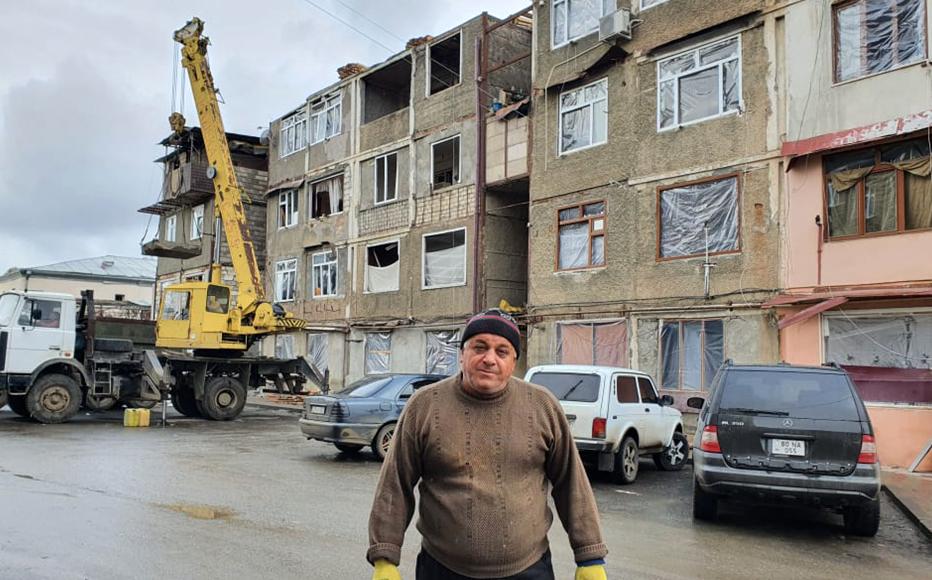 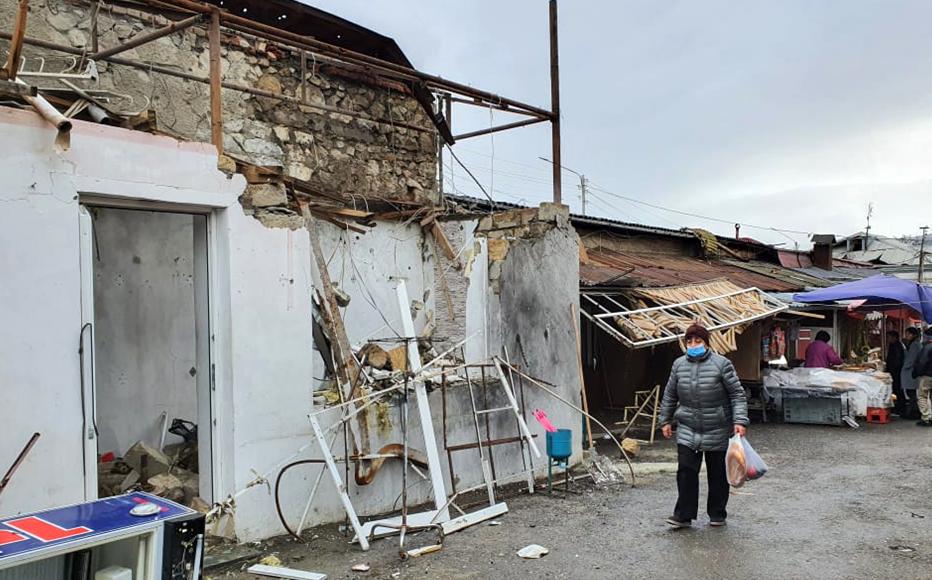 Destruction caused by the latest round of fighting in Nagorny-Karabakh. (Photo: Arshaluys Mghdesyan)
The link has been copied

“We are broken,” Ararat, a taxi driver, said while driving through central Stepanakert pointing out the destruction caused by the war.

The new maternity hospital had its windows shattered during shelling; opposite, a cemetery for fallen soldiers was full of flowers and wreaths brought by the families of victims of the recent 44-day conflict which was ended by a November 10 ceasefire.

“It was a terrible war,” the 35-year-old continued. “It is very difficult to carry on and get back on our feet after this, but for me, there is no alternative. I am not sure if we will manage to recover after this defeat, but life goes on, no matter how hard it is.”

Like many other men in Karabakh, Ararat sent his family to Armenia and joined the army as a volunteer. Now they have all returned to Stepanakert and are trying to establish some sense of normality.

“So far, the main concern for me is safety. Until September 27 [the date the war began], we seemed to have forgotten that we lived under the threat of war. We had to get ourselves armed and dig trenches, rather than concerning ourselves with trivial things,” Ararat said, adding, “I feel sorry for the thousands who died during the hostilities.”

As residents return to Karabakh, which lost about 70 per cent of its land following the war with Azerbaijan, many face an uncertain future. Questions remain over the potential status of parts of Karabakh - including the Lachin corridor that connects it with Armenia – as well as the long-term presence of peacekeepers and whether Azerbaijanis will return to the region. Many families have been displaced or had their homes destroyed in the fighting.

To help them reintegrate, citizens who used to live in places now under Azerbaijani control will receive a one-time financial payment.

“The amount of financial aid for each family member is 300,000 drams (624 US dollars),” said Mane Tandilyan, minister of labour, social affairs and housing with the Stepanakert administration.  She added that everything was being done to ensure the rapid return of people to Karabakh including the provision of housing.

Albert Isakhanyan used to live in Hadrut, the region now controlled by Azerbaijani troops, but has since moved to the de facto capital.

“My family and I live on the outskirts of Stepanakert. We rent an apartment; the rent is paid by the government. There are four of us in the family: me, my wife and our two sons, who serve in the Karabakh army. We have also received financial aid from the government,” he explained.

Isakhanyan said that he would soon be moving to the centre of Stepanakert and intended to open a shop selling groceries.

“We are actually starting everything from scratch, but we are not going to leave Karabakh either,” he said. “This is my home. I cannot imagine my life in any other country. People are returning to Karabakh, and my family has returned too. Let’s live with the hope that the peace will be kept. We are broken, but not hopeless.”

Ensuring Karabakah residents returned has been a strategic aim of the local authorities and the Yerevan government. As soon as the war ended and peacekeepers entered the area, citizens were urged to return and every day, people arrive on buses funded by the Yerevan municipality.

The roads to Stepanakert are crowded, and shops and small businesses have started to operate again. Hotels are also crowded with guests. Some of them are tourists from Armenia but many are displaced persons who are temporarily staying in hotels. The officers of the Russian peacekeeping forces live in the hotels too.

“People are actively returning to Karabakh. There are no more vacant apartments and houses in Stepanakert. We are experiencing difficulties in absorbing the returning population,” Tandilyan said.

But not everyone who wants to has been able to return. Some 3,000 residents of the villages of Berdzor, Aghavno and Sus in the Lachin corridor, for instance, do not yet know the status of their settlements under the ceasefire agreement.

David Babayan, an advisor to the de facto president of Karabakh, said, “At first, it was apparent that these settlements would remain under Armenian control, but currently their fate remains uncertain.”

Others are reluctant to return to homes that are now closer to Azerbaijani military positions.

Hraush Aghabekyan and her daughter were met in the central square of Stepanakert by her son, a soldier in the Karabakh army, on their return from Armenia where they had sought refuge from the fighting. They are among many returnees who have safety concerns since their villages, once located deep within Karabakh territory, now border Azerbaijan.

“I have just returned from Yerevan, but I don’t know what to do yet,” said Aghabekyan, whose husband was killed during hostilities near their village on November 9, the day the ceasefire agreement was signed. “The village where I used to live is not far from Stepanakert. But, as a result of Azerbaijani advancement, it has become a borderland. My village is under the control of Armenian troops, but I have no idea how I can live in the vicinity of Azerbaijani troops.”

The 55-year-old teacher continued, “I am going to stay with my sister in Stepanakert for a while and then we’ll see what happens, what our authorities will say.”

Stepanakert itself was badly damaged as a result of shelling during the war, as were Martakert and Martuni, in the northeast and southeast of Karabakh respectively.

Reconstruction work has begun in these, alongside projects to build basic and affordable housing for those displaced or left homeless.

“About 8,000 apartments are needed to ensure housing for all who lack it,” said Aram Sargsyan, minister of urban development with the local administration. “This requires about 300 million dollars of investment. This is a lot of money; we hope that Russia can help us in this. We have submitted a corresponding request to the Russian government. All we need is to build prefabricated, modular houses fast and provide people with living space.”

The rebuilding project could also provide an opportunity for investment and development, he continued, adding, “There is a huge shortage of workers and construction teams in Karabakh. We offer contracts to builders and pay good money. I call on the construction companies in Armenia to join us in this endeavour. Karabakh is now a place to work and live.”

Giving Voice, Driving Change - from the Borderland to the Steppes
Karabakh
Conflict, Internally displaced
Connect with us