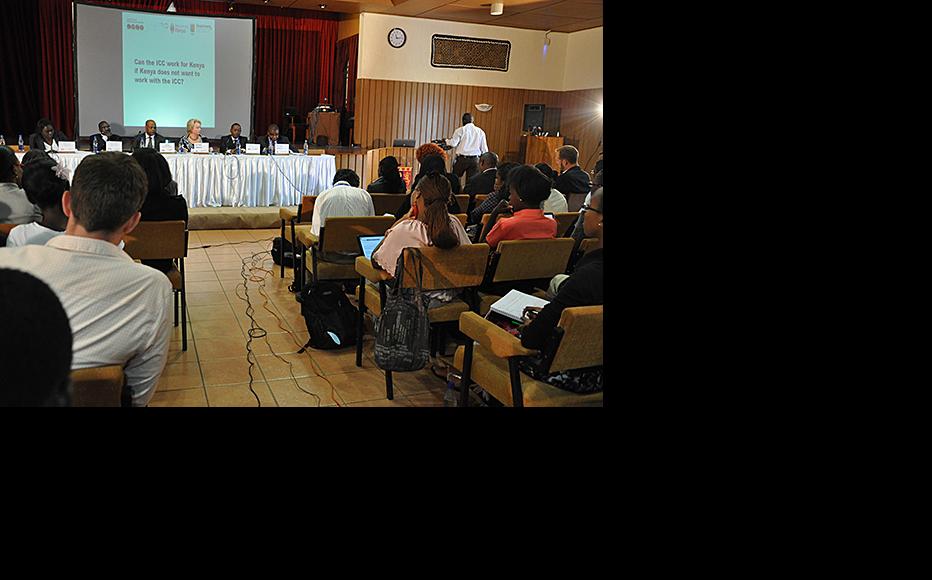 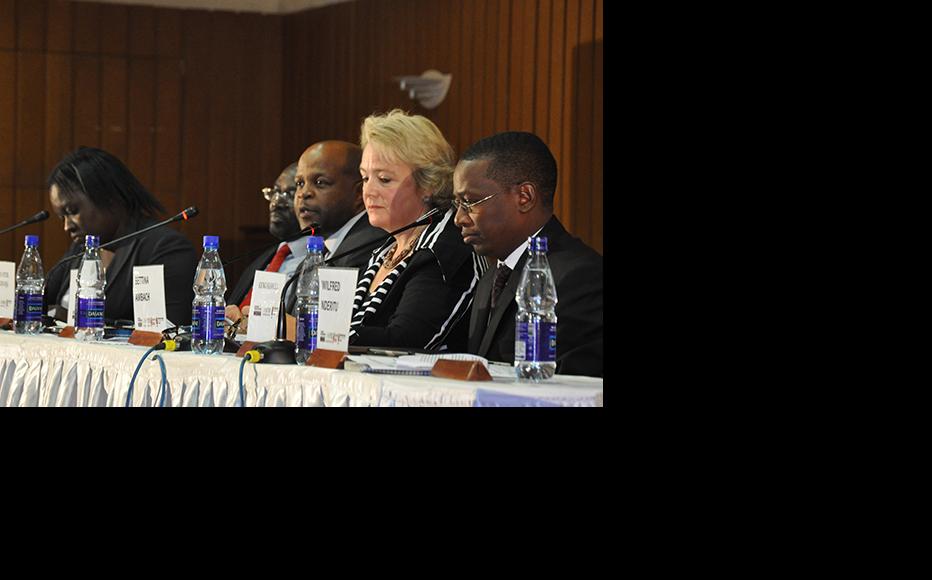 Moves by Kenyan officials to derail trials at the International Criminal Court and falling support for the institution within the country were the focus of an IWPR panel debate among local and international experts on justice and human rights in Nairobi.

Ahead of the trial of the country’s deputy president William Ruto, which started on September 10, the panel, held at Strathmore University in partnership with the Wayamo Communication Foundation, also examined the level of cooperation between Nairobi and the ICC.

Ruto and his co-defendant, Joshua Arap Sang, are charged with organising and fanning the violence that engulfed Kenya following the disputed outcome of a presidential election in December 2007. More than 1,100 people were killed and 650,000 others uprooted from their homes during political and ethnic bloodshed that spread across the country.

The defendants are each charged with murder, persecution and forcible population transfer.

In a separate case due to start in November, Kenyan president Uhuru Kenyatta is to stand trial on similar charges.

Kenyatta and Ruto, elected as president and deputy president in March, are the first sitting state officials to be brought before the ICC. They were charged in March 2011.

A particular focus of IWPR’s September 4 debate, the fourth of its kind held at the university, was the parliamentary motion to take Kenya out of the ICC, which was to be debated the following day.

On September 5, the lower house of parliament voted in favour of withdrawal from the court’s founding treaty, the Rome Statute. The motion was passed by the upper house or Senate on September 10.

One of the panelists, Professor Peter Kagwanja, chief executive of the Africa Policy Institute, explained the argument for withdrawal.

“It is not the law that is in question, it is the political context that is in question,” he said. “Fifty per cent-plus of Kenyans feel that their nation is being humiliated. You have heard debates in the media about issues of sovereignty, issues of indignity, and you are also now beginning to hear about the [risk of ] insecurity and instability if the heads of state are being arraigned in court out there [in The Hague].”

Kagwanja said that in campaigning, Kenyatta and Ruto portrayed the March election as a referendum on their trials, and hence their victory as a nationwide rejection of Hague justice.

“[They said] if we lose, so be it, we face the so-called victor’s justice,” Kagwanja said. “If we win, we will question the [ICC] process – and they did. It is really a political issue which we should not bury our heads in the sand about. They pitched the question as a political question, not a legal question.”

Other legal experts and rights advocates taking part in the debate argued that Kenya could not afford to withdraw from the ICC.

Wilfred Nderitu, the lawyer representing the victims of the 2007-08 violence in the Ruto and Sang case, maintained that the bid to pull out of the ICC did not represent the will of the majority.

“I think Kenya wants to work with the ICC,” he said. “Why do I say that? Because Kenya is not the political class. Kenya is the collectivity of the peoples of Kenya to whom sovereign power belongs. I can only call it dishonesty on the part of the political class when the kind of moves that we have witnessed [to withdraw from the ICC] continue.”

The ICC’s Office of the Prosecutor has repeatedly complained about inadequate levels of cooperation from the Kenyan government in its investigations.

In May the African Union passed a motion which sought to have the three cases referred back to Kenyan courts. That motion came after Kenya’s ambassador to United Nations wrote to the United Nations Security Council asking it to drop the ICC cases altogether.

Since Kenyatta and Ruto were elected, the ICC cases have suffered from a drop in public support (see Kenyan Support for ICC Trials Falls).

In June, 93 victims in the case against Ruto and Sang wrote to the court asking to pull out of participating in the trial. “We no longer confident that the process which is going on at the court is beneficial to our interests,” their letter said.

Nderitu told the IWPR debate that in fact, only 47 of the 93 had actually registered as victims with the ICC, and a further 13 were still in the process of doing so when the letter was sent.

“Of course the letter is a setback for the work of the ICC in Kenya, but I think that is also just half the story, in a sense that after our own investigations, it was established that there are people who would still be willing to participate out of those who had signed [the letter],” he said.

Nderitu claimed that some of the signatures on the letter “were procured through misinformation”. He called on victims of the post-election violence to “hang on in there” in the face of pressure.

“Without victims, I think this whole process would not be meaningful whatsoever,” he added.

The debate also examined the extent of the Kenyan authorities’ own investigations into the violence of 2007-08.

The national Office of the Director of Public Prosecutions (ODPP) has repeatedly come under fire for failing to work in tandem with the ICC to prosecute mid- and lower-level perpetrators of the violence.

In February 2012, the ODPP established a taskforce to look into approximately 5,000 criminal cases arising from the post-election violence. Angote questioned the inclusion of the police in the taskforce, given that officers were themselves accused of committing crimes.

“We cannot have police officers being judges and lawyers in their own court,” she said.

Angote further noted that Kenya had failed to change its constitution so that the 2009 International Crimes Act of 2009 – which allows for the prosecution of international-scale crimes – would be made applicable to the post-election violence.

“Victims of 2007 and 2008 remain unprovided for in a structure that would ensure local accountability,” she said. (For more, see New Kenyan Justice Effort Meets Scepticism.)

According to the senior assistant director of public prosecutions in Kenya, Kioko Kamula, 1,200 of the cases the ODPP-led taskforce has looked at have been sent to court, but the cases have so far resulted in just 191 convictions. A further 274 suspects have been acquitted and 125 other cases have been dropped.

Kamula insisted that his office had been “proactive” in investigating perpetrators, but had struggled to secure the evidence needed for convictions.

“For most of these cases, victims reported these matters to police stations [with] no information, no statements, no expert witnesses,” he said. “In most cases, victims themselves cannot be traced. They reported and disappeared. We know many of them were displaced. Because of the passage of time since 2008, in some cases it is impossible to be able to gather evidence together to be able to prosecute effectively.”

Kamula also accused the ICC of failing to cooperate with his office, and to provide information and evidence that it had requested from prosecutors in The Hague.

“The ICC has declined to share [information] with the DPP [Director of Public Prosecutions] and with the government,” he said, pointing to witness statements, documentary evidence, and information that would enable him to identify witnesses.

“That information might be critical to unravelling some of the cold cases that are pending around the country.”

Phakiso Mochochoko, head of the jurisdiction, complementarity and cooperation division of the ICC’s Office of the Prosecutor, rejected this allegation. He noted that the ICC is under an obligation to cooperate with a state that is investigating and prosecuting crimes under its own jurisdiction.

“I’m not aware of any application that has been made to the ICC to cooperate with the DPP,” he said during the debate. “The ICC would never refuse such a thing. There can be conditions under which we would be able to release information to ensure that witnesses are safe; ensure that the information would be treated in a secure manner. As far as I am aware, there has never been any request to the office of the prosecutor to provide assistance to the DPP.”

J.J Wangui is an IWPR reporter in Nairobi. Thomas Bwire is a reporter for Pamoja FM in Kibera.

This article was produced as part of a media development programme by IWPR and Wayamo Communication Foundation.