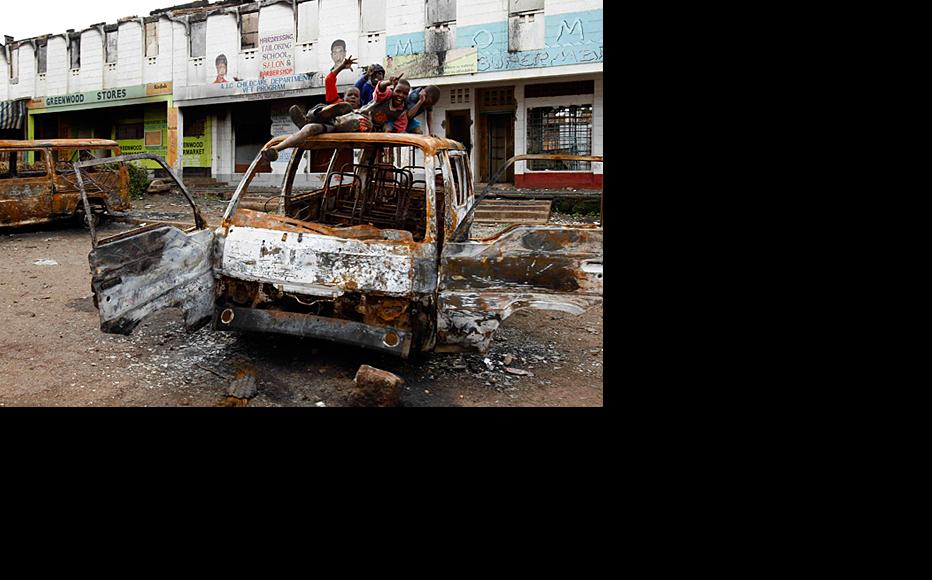 Children play on top of a vehicle destroyed during post-election violence in Kibera, Nairobi. (Photo: The Star/Kenya)
The link has been copied

Rights groups in Kenya are questioning whether a new taskforce set up by the Director of Public Prosecutions, DPP, to review criminal cases stemming from post-election violence in 2007 and 2008 will deliver justice.

They are concerned that the multi-agency taskforce could serve as a smokescreen for continuing inaction. Even if they are proved wrong, it is unclear whether the force will be able to ensure allegations against Kenyan police are properly dealt with.

Months of violence following a disputed presidential election in December 2007 left 1,333 people dead and 350,000 displaced. According to a December 2011 report by the advocacy group Human Rights Watch, only six cases have so far resulted in convictions in the Kenyan courts.

The 20-member taskforce was established on February 9 with a mandate to assess the progress of current investigations into the post-election violence, and to decide whether there is enough evidence to pursue 5,000 cases that are currently before the courts.

The panel, drawn from the DPP’s office, the police, justice ministry, the attorney general’s office and the witness protection agency, will make recommendations on what actions the government should take to bring the alleged perpetrators of the violence to justice. Dorcas Oduor, a top prosecution official who is heading the taskforce, pledged to submit a report with the recommendations before Kenya’s next presidential election, scheduled for March 2013.

It is not the first time the Kenyan authorities have pledged to prosecute the perpetrators of violence. But so far its commitments have not translated into action.

The government twice submitted a bill that would have established a national tribunal to try election violence cases, but parliament rejected it on both occasions.

After the government repeatedly failed to launch domestic prosecutions, the International Criminal Court, ICC, launched its own investigations in March 2010.

The fact that this international intervention was necessary at all raises questions about the Kenyan state’s willingness to ensure that justice is served. The announcement of the DPP taskforce came just two weeks after the ICC confirmed charges against four of the six suspects that the tribunal’s prosecutor investigated.

“It is interesting that the government is talking again about bringing accountability to the victims. This is the third time that the DPP has put together a team to investigate the 5,000 cases, but nothing [has yet] happened,” Neela Ghoshal, Nairobi-based researcher for Human Rights Watch, said.

“Sometimes the justice system can function independently. But the big question is how many Kenyans trust the local courts? Any time there is something happening at the ICC, the government makes many statements on how it’s going to seek justice in Kenya.”

On past record, Ghoshal has yet to be convinced that the new taskforce will pave way for prosecutions of lower- and mid-level perpetrators.

“What different is this taskforce going to make?” she said. “There are thousands of cases out there. One cannot really trust such statements from the government until we see the results. There are other areas in which the government – if it cared about the victims – could have made a difference yesterday.”

According to the Commission of Inquiry on Post Election Violence, an international investigative panel set up by the Kenyan government, police were responsible for at least 405 fatal shootings and hundreds of injuries and rapes during the disturbances of 2007-08.

In its investigations into the actions of top-level figures accused of sponsoring the violence, the ICC found reasonable grounds to believe that police were deployed in strongholds of the coalition government’s Orange Democratic Movement, including Kisumu, and used excessive force against civilians.

Despite this, no member of the police force has been convicted. One police officer was prosecuted in relation to police shootings in Kisumu, but he was later released.

The Kenyan government insists investigations into the Kisumu shootings are continuing. But the DPP has not said how many of the 5,000 post-election violence cases currently before the courts involve allegations against the police.

Christine Alai of the International Centre for Transitional Justice, ICTJ, in Nairobi warned that the taskforce must not conduct substandard investigations into the actions of police, or omit important cases.

“It is obvious something has to be done with police… to ensure we can get accountability and that cases are not thrown out on technicalities. The process should not be a sham due to shoddy investigations. Victims and Kenyans are tired of sham processes,” Alai warned, referring to previous investigations into the shootings in Kisumu.

Ghoshal says Kenyan police have repeatedly failed to admit responsibility for crimes against civilians. According to victims interviewed by Human Rights Watch, police failed to document complaints submitted during the violence.

“I have spoken to victims who were shot by police. They told me they went to the police and told them that they had been shot by the police. And a number of police said to them, “Sorry we can’t [accept] that,” said Ghoshal.

Ghoshal contrasted the authorities’ failure to bring criminal prosecutions with the civil cases which a number of victims of the violence have successfully brought against police force members.

“Twenty victims have won the civil cases [against the police] and the majority of them in Kisumu and Nairobi, yet the attorney general has refused to pay damages, so where is the political will of the government?” Ghoshal said.

Ken Wafula, director of the Eldoret-based Centre for Human Rights and Democracy, doubts whether police will be investigated and prosecuted. He would like to see a local tribunal drawn from international as well as Kenyan legal experts.

“There are challenges. How do you grill the police who are supposed to carry out the investigations? Some of them are perpetrators. That is why we have been asking for a special tribunal. It would have been the most appropriate mechanism to address this matter,” he said.

It is not yet clear whether the panel will be able to call for such a special tribunal to be set up to handle outstanding cases, if it deems that appropriate.

ARE AUTHORITIES WILLING OR ABLE TO PURSUE CASES?

Kenya’s former justice minister, Mutula Kilonzo, who is now in charge of education, acknowledges that it has been a challenge to prosecute police accused of committing crimes during the unrest.

Kilonzo spoke to IWPR shortly before he was replaced as justice minister on March 27 by Eugene Wamalwa of the coalition government’s Party of National Unity.

“Let’s appreciate that reforms in the police force are ongoing. The mere fact that crimes were committed by police does not in the end mean that crimes will be covered [up],” he said. “There is also a difference between regular police and the Criminal Investigation Department. I am confident that it is possible to prosecute even police involved in the [post-election] crimes.”

Citing a shortage of prosecutors and a lack of funding, Kilonzo warned that the DPP might still struggle to conduct effective prosecutions

“The challenge is that DPP only [exists as a] structure. It is not well funded. It does not have sufficient capacity [and] it has only 93 prosecutors and very little money,” he said.

Kilonzo also expressed concern that politicians might interfere with the justice process since some of them view any process designed to uncover the truth about the post-election violence as directed against them.

“Politicians should stop politicising and stop thinking it’s about them. They assume the taskforce is about them. The fact is that international crimes occurred in Kenya,” he said. “These things happened and will affect the country in future if this is not resolved.”

There have been mixed reactions to the DPP’s move to make progress on outstanding cases.

Mzalendo Kibunjia, the chairman of the National Cohesion and Integration Commission, NCIC, says the review of the cases comes too late, as Kenyans are now starting to move on from the horrors of 2008.

“I think this is going to open the wounds. The government did not do anything for all these years – people have now begun to heal. This is going to worsen the problem,” he said.

By contrast, Wafula believes that reexamining the cases and moving ahead with prosecutions is a necessary evil in order to unearth the truth about the violence and thereby help prevent a repetition of it, particularly around next year’s elections.

“It is late, yes; but it is necessary to set an example to Kenyans as they go to the polls. A form of prosecution is good so that people cannot repeat the same [crimes],” he said.

Wafula believes it would make sense to reduce the 5,000 cases to about 300. He argues that this would allow the DPP to deliver exemplary justice while also processing a more manageable number of cases and ensuring the necessary witnesses and solid evidence are in place.

“Let them sieve through the 5,000 cases and thin down to a few cases with evidence. Then deal with perpetrators, to send a message,” Wafula said.

Alai of the ICTJ, however, wants as many cases as possible to be investigated thoroughly and objectively.

“It’s not a numerical issue,” she said, adding that the reasons for past delays in the justice process should also be exposed.

“We have to know what happened for the past four years. Why did the process stall?” she said.

Alai hopes that the DPP’s initiative is not an attempt to cement the Kenyan government’s challenge of admissibility at the ICC. Last August, ICC judges rejected a challenge to the legality of the court’s intervention in Kenya.

Following the confirmation of charges against four suspects this January, lawyers lodged a second admissibility challenge based on the view that the alleged crimes were not serious enough to fall under the ICC’s jurisdiction. The court’s appeal judges are currently considering this submission.

“Let [the government] not focus on ICC, let the process take its course,” Alai said.

Judie Kaberia is an IWPR-trained reporter in Nairobi.