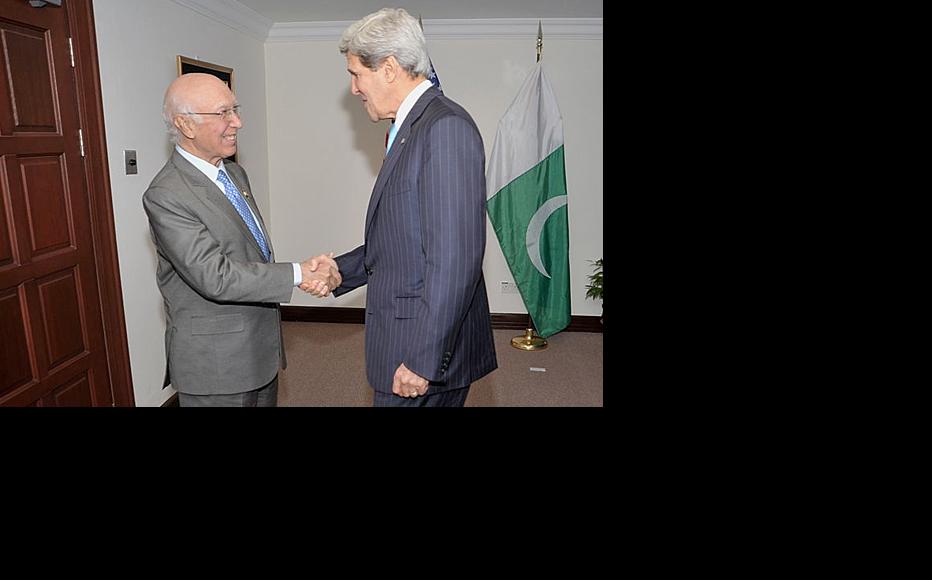 Pakistani foreign affairs chief Sartaj Aziz has angered Afghans by claiming that the Taleban is unlikely to enter into talks with the current government in Kabul.

Aziz made the remarks during a visit to Washington to discuss strategic cooperation with the United States, particularly in the aftermath of the NATO-led contingent’s exit from Afghanistan later this year.

Campaigning for the Afghan presidential election began last week. Aziz, the National Security and Foreign Affairs Advisor to Prime Minister Nawaz Sharif, made it clear he believed any progress in peace talks with the Taleban was unlikely while the government of President Hamed Karzai was in power.

The election will take place on April 5, but a run-off could delay the formation of a new administration for months.

“My own feeling is that after the election, the Taleban will probably talk to the new government more… than the present government,” Aziz told an audience at Johns Hopkins University’s School of Advanced International Studies. “So one should hope that before 2014 ends, some kind of dialogue will be going on.”

He said Pakistan was concerned that the security situation would deteriorate after foreign forces left Afghanistan, but it would seek to protect itself through “better border management”.

“Postponing peace talks until after the election shows once again that Pakistan wishes to interfere in the internal affairs of Afghanistan, the same as it has done over the past three decades and in the 12 years [since the end of Taleban rule], and just as it has continued its policy of sending suicide bombers and disrupting peace and stability in Afghanistan,” Spanta said, in remarks quoted by Afghan media.

“Pakistan has made efforts to facilitate the peace process between the Afghan government and the Taleban. For instance, on January 27, we and the United States government asked the Afghan Taleban to start peace talks with the country’s government,” she said.

Kabul has long insisted that it should lead and coordinate any talks with the Taleban, and is sensitive to any suggestion that other countries are interfering or trying to take the lead.

When it emerged in 2011 that the Taleban had been persuaded to open an office in Qatar as a point of contact for negotiations, Kabul felt it was being sidelined from the peace process, and recalled its ambassador from the country to underline its annoyance.

The High Peace Council, a body created by the Afghan government in 2009 to bring the Taleban to the negotiating table, has repeatedly accused the Pakistanis of hampering its efforts.

“Although Pakistani officials have promised honest cooperation with the president of Afghanistan, the country’s intelligence and military are creating problems in this regard,” Qasemyar said.

The first formal meetings between the Islamabad government and negotiators representing the Pakistani Taleban began last week. In Kabul, some believe the Pakistanis want to include the Afghan branch of the insurgent movement in these talks.

Abdul Ghafur Lewal, director of the Afghanistan Regional Studies Centre, said Kabul had made an Afghan-led peace process one of the preconditions for the Bilateral Security Agreement between Afghanistan and the United States. President Karzai has delayed signing this document, which would allow some US troops to remain in the country in return for immunity to prosecution.

“With these remarks, Sartaj Aziz was assuring the current government that ‘talks will not begin with you there’, meaning that the pact must not be signed, either,” he said.

He added that Aziz was also sending a signal to the next Afghan administration that Pakistani support was essential if peace talks were to take place.

“He was giving a kind of a message to the future government of Afghanistan in these remarks, to convince the next president that as long as it [the government] agrees to Pakistan's interests and vision, it will be able to bring the Taleban to the negotiating table,” Lewal said. “These remarks were intended to prompt the future president to agree to deals with Pakistan.”

Political analyst Jawed Kohestani said Aziz’s speech showed just how irrelevant the current government had become in the eyes of regional actors. Pakistan was already making plans to ensure its influence in the long term.

“Since the Americans are disappointed with the Afghan government, Pakistan is trying to use this opportunity to make sure the Americans understand that they need to hand over the keys to solving the conflict in Afghanistan to Pakistan,” Kohestani said. The plan was that Islamabad would “bring the Taleban to the negotiating table as a gift to the new Afghan government, in exchange for certain benefits in return”.

Esmat Qanay, an Afghan journalist and political analyst, agreed that Pakistan was manoeuvring in the hope it could persuade Western powers, particularly the US, that it could fill the power vacuum in Afghanistan after foreign troops leave.

“Pakistan may try to show the US that it has the ideological thinking and the regional and military authority to fill this gap, and to make the “west accept this idea,” he said. “However, I believe that the US will never hand the keys to the Afghan issue to Pakistan."